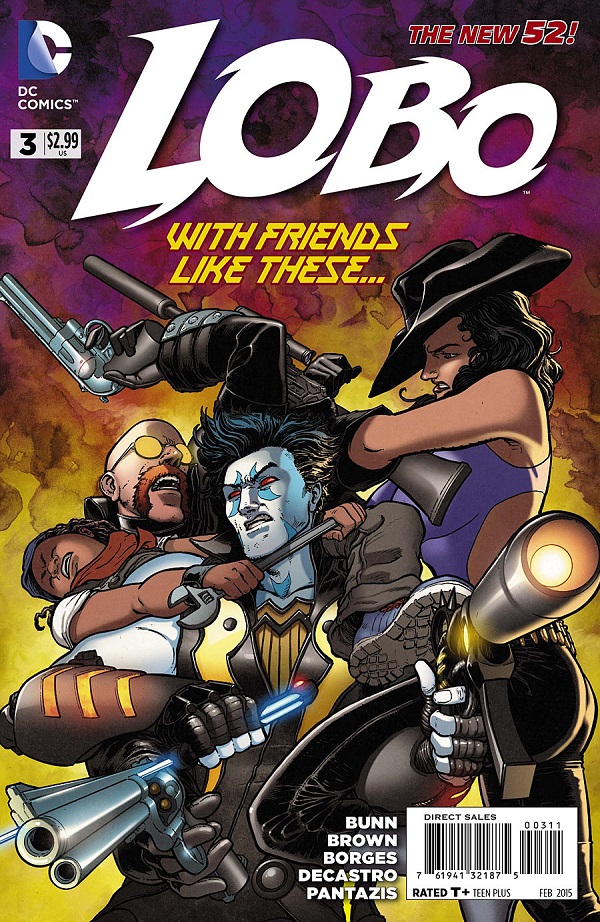 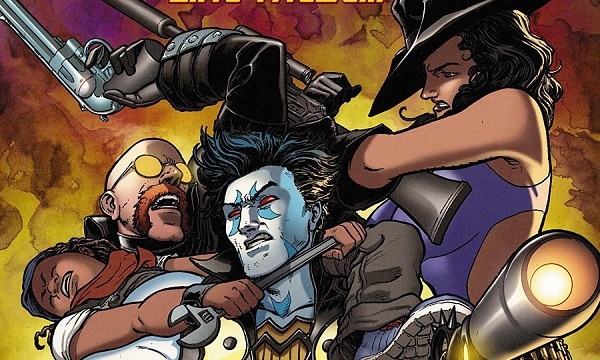 Lobo and posse continue their bounty hunting gig against a phase-shifting foe in the third issue of a comic that feels like it is trying to be a lot of things at once…and isn’t hitting the mark.

I’ll say this straight off the top: the tone of this comic has left me vexed. Lobo is, all at once, a cold blooded killer and a light hearted chum with a team of sidekicks. He’s a dark, Wolverine-style character out in space, stabbing his way to riches and craving vengeance for any who may hurt his pride. He’s also part swashbuckling pirate, exchanging witty banter with his crew of human helpers, one of which is a teenage hacker. The dichotomy of the character traits in Lobo gives the comic a confused tone, like it doesn’t know what it is trying to be so it throws a few elements of everything into the mix, which just turns out bland.

Lobo drops some badass lines about vengeance and killing then immediately talks to his crew, who he relies on to bail him out. The structure of the issue feels like a CW show with a protagonist being helped by his merry band of capable assistants….except this lead isn’t likable, has hyper violent tendencies, threatens to jettison his crew, and generally makes no sense with his team, or himself. Lobo is referred to as the “meanest killer of men in the galaxy”, but that moniker does not fit the tone of this comic at all. There is no grit here to justify such a claim, and when grit and intensity is attempted, it feels completely out of place with the team dynamic that exists. With Lobo seemingly struggling to determine who he is, the team does not step up and steal the show when it is open for them to do so, and their look & dialogue is just flat.

The artwork from Reilly Brown in this issue is not bad at any point, but there also isn’t much in the way of wow factor. The confusion in tone of the script is mirrored in the artwork which features moments of extreme violence that come across surprising given the jovial smirks and tone of Lobo throughout. It feels like watching an episode of The Flash, which hasn’t been exceptionally violent thus far, and suddenly he decapitates a foe out of nowhere.

The visual tone of the vast majority of the issue does not support that grit and violence. When Lobo does get gritty and act like the “meanest killer” it feels out of character for Brown’s look and feel he has developed. The design of the team is uninspired, and even if design choices do not fall on Brown’s shoulders, the execution of their individual looks is generic and forgettable. One team member has been pulled directly from The Matrix and the other looks like a stripper who has firearms. While neither of these characters have much in the way of dialogue to make them interesting, there is also absolutely nothing about their look and design that warrants a pause to wonder more about either character.

Lobo #3 is a comic that feels like it is trying to find it’s way, and the net result is a generic story that lacks punch. Bunn can write grit, I’ve read it, and I get a strong feeling that Lobo would benefit from more of that and less of the space-pirate-with-a-team-of-pals-rolling-through-the-galaxy take. A clearer focus may allow Reilly Brown to really cut loose and not have to straddle multiple tones as well.