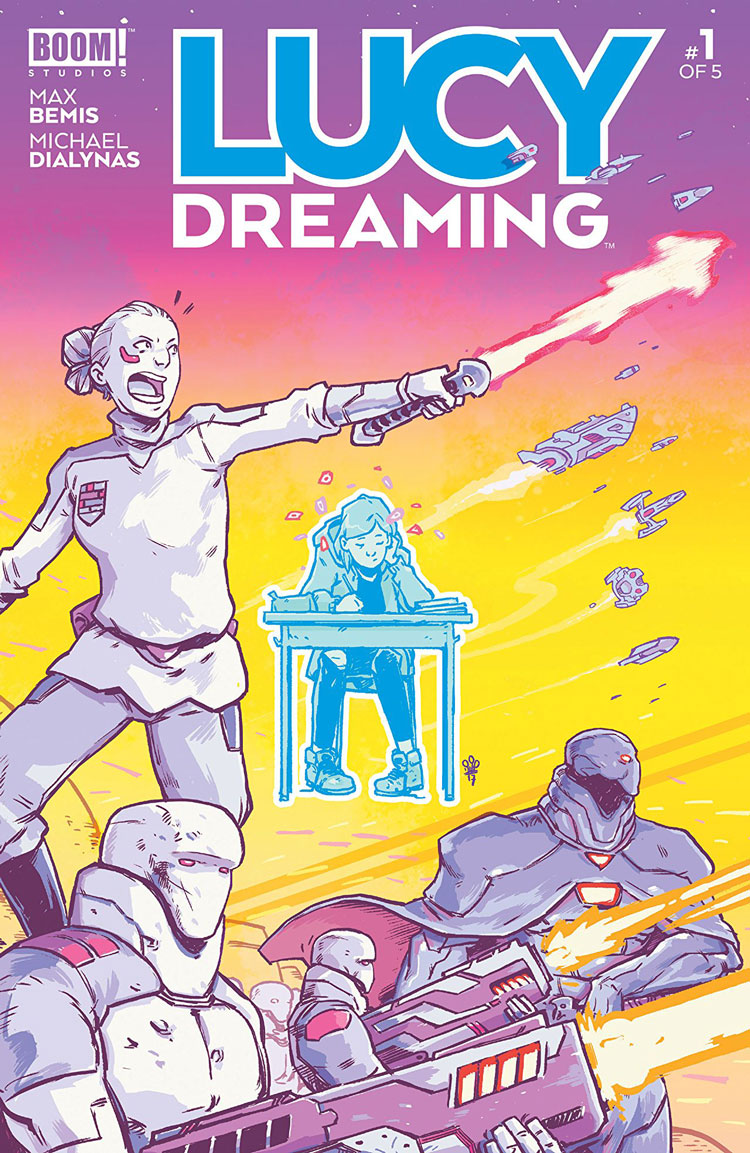 Lucy yearns for the fantastical, hoping for the lives of the women in the novels she reads rather than the boring one she lives. But what if her dreams become reality? Find out in this first installment of Lucy Dreamer!

Bemis does a great job in introducing his concept to the reader. The reader definitely catches on before Lucy, but the idea of being transported into different realities through dreams is fascinating. I love the rip-off Star Wars universe she goes to as well. While I am a major fan of Star Wars, the criticisms shown in how insane some of Star Wars is — and the criticisms towards the Jedi in general — are very well done in a hilarious fashion.

Do I feel like Lucy’s a bit too whiny at times to sympathize with? Yeah, I mean, I guess she’s supposed to be a teenager, but it is a bit much at times. However, that doesn’t mean she’s not a compelling character. Her taste for tales of conquest and action is fantastic and her surly attitude makes her fun.

I love the art Dialynas creates. I like that Lucy is this awkward girl with pink hair. I love how animated her faces get. It brings more character to her and fits with her surly and sometimes obnoxious attitude.

I love the action splashes. There are a few, with beautiful pink and orange explosions and this pink to blue color scheme that just makes everything feel very retro, in a way. The scenes always have this movement to them, this exhilaration that’s partially the sheer terror of being in that kind of situation and the excitement of living out a fantasy. You can see the love for Star Wars in the parody they portray.

The lettering is awesome. Bell’s use of pink text-like bubbles works well for Lucy’s fake blog. I like that sometimes, words pop out of their bubbles. I like that there’s a difference in font between a robot voice and a human voice. I especially love that Barc Landin has his own font for his name when he reveals it — it really adds to the melodrama of his character.

Definitely check out Lucy Dreaming. It’s a weird romp into a fantastical idea that has a well-developed main character and has laid the groundwork for an intriguing series.