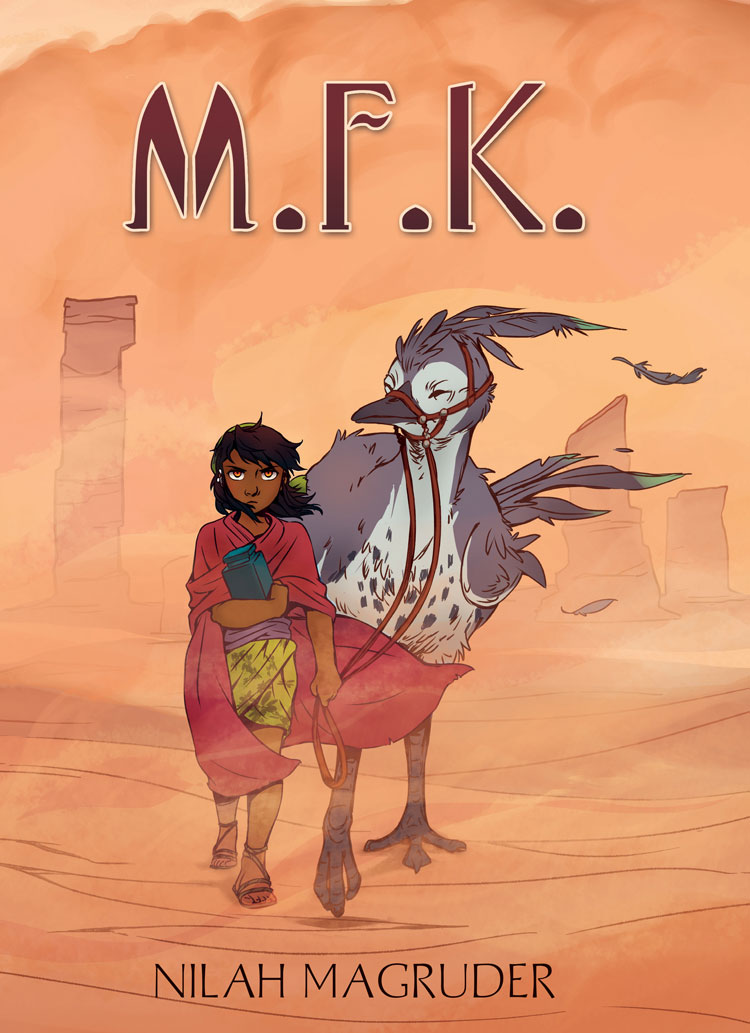 Abbie doesn’t set out to be a hero. She has a plan. She’s fine on her own. She doesn’t need you.

Trouble is, this young girl finds herself hurt with an injured moa (big bird) not too far outside a tiny little desert town in the middle of a sandstorm. She’s taken in to heal by a doctor, her sculptor father, and a young boy named Jaime who’s looking for a friend. The trouble is, Abbie isn’t. And it isn’t long before her secret gets out in the town, one tied to an aggressor that keeps the people cowed in fear and poverty.

With this first print volume of collected webcomics, writer and artist Nilah Magruder sets up the kind of hero’s journey fans have been crying out for in droves over the past few years. Every taste women and young girls have gotten of this kind of story — be it Rey in The Force Awakens or the more adult Furiosa in Fury Road — has added to the pantheon of hero stories this new generation gets to enjoy that we hadn’t seen to date.

Besides introducing a young girl of color on the path to being a hero — one with a disability that she manages on a day-to-day basis as well — Magruder renders quite a complex character arc for Abbie in only a few chapters. And she does so while maintaining an all-ages feel (Spare a few soft expletives. Be aware if your kids are unaccustomed to hearing “asshole.”) without losing any sense of a rich and dramatic background or environment for the main character and her new companion.

Abbie is powerful, but in a way that makes her automatically an antagonist for the ill-informed, even while performing heroic acts. It’s the kind of conundrum for a hero character that I’ve been rolling around in my head ever since first reading the comic. The townspeople of Little Marigold certainly resonate with me from a historical perspective, harkening back to ghettoized Jews or the victims of American slavery pre- and post-Civil War, but not in any simple one-to-one comparison. Their pacifism is rooted in fear, but intensely adhered to, with all those who would have the mind to fight back long gone, save Jaime.

And Abbie’s own origins, while somewhat shrouded in mystery, clearly carry with them the mark of outsider, even among those who offer her kindness. The townspeople are in no way bad people, but their weakness serves to ostracize those of strength among them. That’s a very curious dynamic when you have a reticent hero like Abbie, who nonetheless exhibits a bevy of childlike charm and endearment despite her tragic past and uncertain future.

The art, also by Magruder, is beautifully balanced to give this sense of this same childlike charm, while still depicting the severity of the physical conditions of the desert and the toll it takes on its inhabitants. Line gets looser in the more emotional moments, some funny and charming, some involving fight scenes, but you never lose the sense that Jaime and Abbie are just kids up against classic bullies and the weight of a place they don’t quite fit into.

The real joy in M.F.K.’s rendering, however, is in its gorgeous color palette — a perfect reflection of the desert heat and grit with its oranges and browns and dirty warm blues, balanced by the cool nighttime depth of dark purple and radiating pinks. On clear days, the powder blue of the sky balances against Abbie’s deep cyan shirt, tying panels together across spreads, but also giving even more contrast to Abbie’s brown skin and glowing orange eyes. It’s a real delight to even just page through and see the detail put into the color range here.

A wonderful first volume of what I hope is many more to come for my bookshelf (As the webcomic continues on with chapter four right here.), M.F.K. is a beautiful next generation hero’s journey any kid will want to explore, but every adult will want to marvel at for its grace, complexity, and stunning artboards.