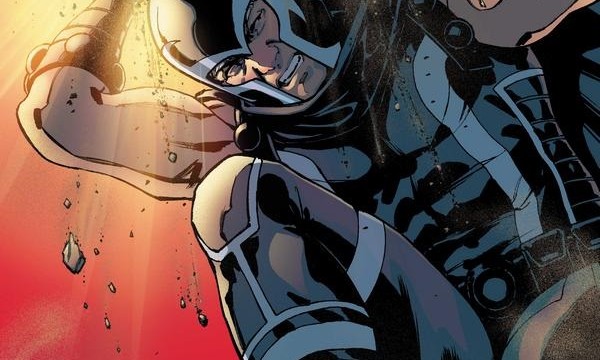 When Magneto is faced with the end up the world he does the only thing he knows how to do – fight for the survival of his species. However, with the final incursion threatening to destroy everything, Erik comes to grips with the fact that fighting for the survival of Mutantkind also means doing the same for humans. All of this is made quite tragic by the fact that we know from the events of Secret Wars that Magneto is doomed to fail. This makes Magneto #18 a wonderful, chilling, character driven issue that cuts to the core of who the character is as the world is falling apart. Not to mention it’s an issue that anyone with a passing knowledge of Magneto can pickup and understand.

As I discussed in my review for Captain America and The Mighty Avengers #8, the concept of the “Last Days” tie-ins for Secret Wars have a lot of room in which to work. Considering creators can cover anywhere from the time period of Time Runs Out through the events of Secret Wars #1, there are so many ways that these issues can go. Whereas the Mighty Avengers issue was larger in size and scope, Magneto #18 is very personal and character driven. Instead of covering the months leading up to the final incursion, this issue takes place during the events of Secret Wars #1 with a few flashbacks interspersed throughout. The variety showcases in the first two tie-ins released this week have me very excited at the prospects of what’s to come, as both are very strong comics.

Cullen Bunn has been doing a phenomenal job with the character of Magneto over the past year and a half. Despite having developed into one of the more complicated characters over the years, Erik has had always been driven by the singular goal of ensuring the survival of his species. It is this fact that Bunn has been able to hone in on throughout his run, and this character trait fits perfectly into a story about the end of the world. Magneto has aimed to stop the incursion, or die trying. He knows that everything that he has ever done in his life will be for naught if the world is destroyed, but he also knows that stopping the incursion entails destroying the other Earth. Magneto knows that in order to save what he holds dear he will have to return to his roots in a strange, twisted turn of events.

Bunn having the character convey this to the reader through a conversation with his daughter Lorna was a stroke of genius. Discussing everything he has sacrificed for his species to the daughter he wasn’t a good father to because he was out being evil takes the issue to a whole other level of personal. The only real problem with this issue is that we don’t really know whether Magneto has a plan. Through flashbacks we see that he knows about the incursions, but we are never told whether he thinks he has a plan to stop it or if he is just planning on going out fighting. It feels implied that he has a plan, and hopefully next issue we can see his futile attempt to save his species, and his Earth. There is also not as much fighting as one would think there would be. It’s a little weird that way. It’s okay though because the character work is so strong that a little confusion on the action end doesn’t hurt this issue nearly as much as it usually would.

Another clever aspect of the issue that works well are the afformentioned flashbacks. The constant of Namor in the flashbacks not only gives this issue a connection to a member of the Illuminati, and thus the events leading to this event, but also illuminate Magneto as a character. The long history and similarities between the two characters shown here hammer home the fact that no matter how much the characters change they’ve always ultimately ended up doing whatever they can to ensure the survival of their people. Both characters are headstrong mutants that have have evolved over the years, but still respect one another. This point can be seen when comparing the first flashback to the advice that Namor gives Magneto at the end of the third and final one.

Cullen Bunn is joined by artist Paul Davidson for this Secret Wars: Last Days arc, and his work here fits right in with the high standards of excellence set forth by series regular Gabriel Hernandez Walta. In fact, this issue is one of the best looking of the entire series. Davidson evokes Walta just enough to keep in line with the general tone of the series, but he is much stronger with anatomy. The double page splash near the beginning shows off the grit and horror that should come with being on the street during the end of the world. A nice touch is the change in style for the flashbacks. Davidson is able to clean up the art a little bit, giving the characters a more rounded feel. This along with Paul Mounts’ faded, dream like colors during these scenes effectively help in separating the flashbacks from the present day. The issue would suffer a but if it wasn’t for the Paul Mounts color art. The use of color in the flashbacks has already been mentioned, but the true highlight are purple and green used to surround Erik and Lorna as they really start to use their power. This effect makes the splash page of Magneto unleashing his power hands down the best page of the issue.

We may know how the stories eventually end, but these “Last Days” tie-ins to Secret Wars have the chance to be something special in how they handle the characters. The crossover may have been dropped in the laps of creators, but it truly feels that the creative teams in both of this week’s titles were given plenty of time to make it work quite well. The range of possibilities in telling these stories, afforded by the structure of Secret Wars, allow for the creators to carry the themes of their ongoing series into a crossover event with the final incursion as merely a backdrop. Granted a backdrop that adds the tension that comes with the world ending. Bunn and Davidson take full advantage by using the end of the world to solidify the themes of their title, and enhance the characterization of their lead. This may not add anything of substance to Secret Wars as a whole, but rather the opposite. The “Last Days” concept is allowing for Secret Wars to bring something to individual titles, and that’s all too rare for a crossover event. If you read Magneto or are a fan of the X-Men then you will find this to be a very rewarding issue. This will be the case whether you’ve read seventeen issues, a handful of issues, or none at all. This features a great look into the philosophy of a complicated character, increased tenfold by the end of the world looming. Magneto #18 is a crossover issue done right.