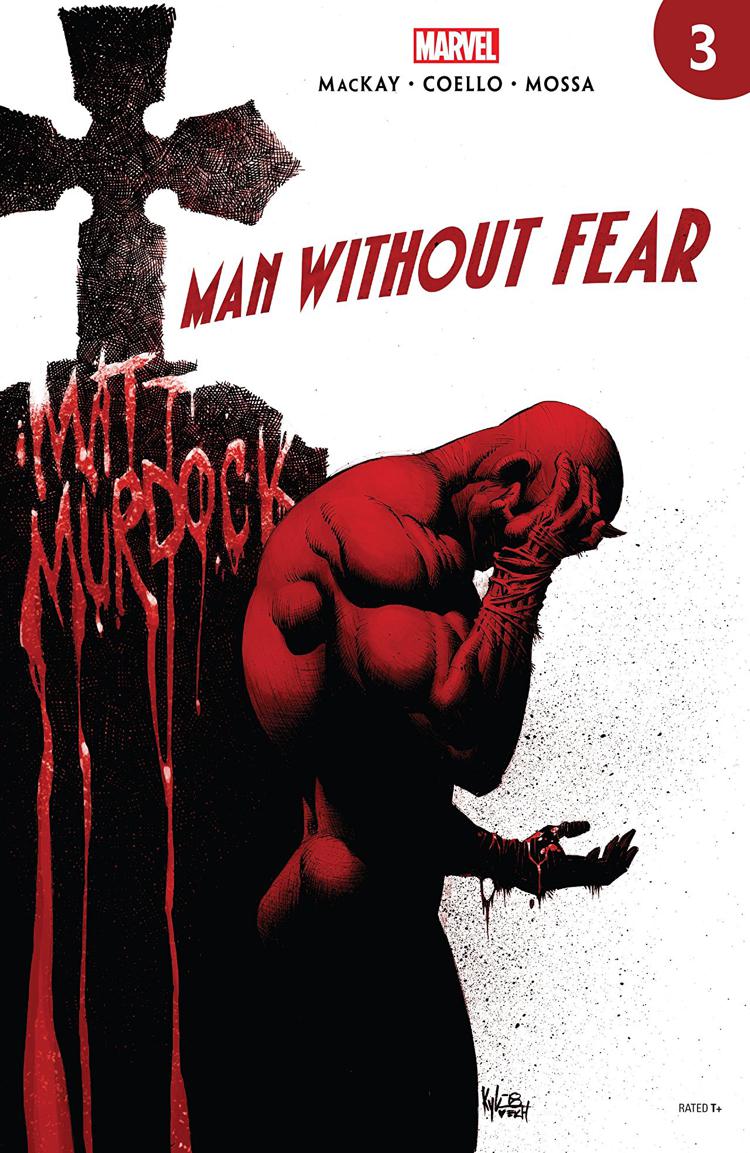 “So now that you’ve ditched your badass act….what do you have under it?”

For the past couple of weeks, Jed MacKay has been absolutely crushing it with Man Without Fear and this weeks issue is no exception. Over the course of the last two issues, MacKay has examined Matt’s relationship to his two main driving forces pain and fear and how those two things not only shape Matt, but also the relationships and connections around him. Last week we saw his budding relationship and reunion with his former lover Kirsten McDuffie come crumbling down around him after he let his fear creep in and snake its way into his mind. We saw his fear manipulate into recounting the many women that he has lost and failed as a direct cause and effect of being the Man Without Fear. In the previous two issues, we’ve seen how Matt’s closest friend and the love of his life have reacted to the news that he is no longer going to be Daredevil…now its time for other heroes to find out.

Issue #3 centers around Matt attempting to go through physical therapy with the assistance of his former Defenders teammates Danny Rand, Luke Cage, and Jessica Jones. Threaded throughout the issue we get to see Matt’s struggles with trying to regain control of his body and while it doesn’t make a physical manifestation, years of pain make an appearance. Running parallel through the issue and Matt’s struggles with rehabilitation Jed recounts a story from Matt’s days with The Defenders involving Ben Urich and a serial killer known only as The Foolkiller. The Foolkiller would deliver a note to his victims judging them to be a fool for whatever purpose he deemed necessary, then twenty-four hours later he would come for his victim and deliver what he deemed to be their sentence killing them. This time he picked the wrong victim as Ben Urich has a whole host of costumed buddies, with The Man Without Fear being at the very top of that list.

Over the course of the story, we see the memory running parallel and we start to see that MacKay is using it as a means to compare and contrast the Matt Murdock that we have in the present to the Matt Murdock that existed in the past as the Man Without Fear. My favorite part of the issue comes near the end when we finally get to see the purpose for MacKay recounting one of Matt’s many Defender experiences. The Foolkiller has taken down Luke and Jessica and he is currently in Ben Urich’s apartment hunting him and trying to sniff him out to deliver his death sentence, Ben Urich jumps out with a butcher knife in an attempt to take control and save himself, but he’s not fast enough…..the Foolkiller points his gun at Urich’s head and tells him he is about to meet the devil. It is in this moment that Daredevil appears and proves exactly why he has the name The Man Without Fear. He points The Foolkillers gun right at his own head and calls his bluff, he gives him two options the grave or the mental ward and it absolutely breaks The Foolkiller. It is in this moment that the other Defenders truly realize that Matt Murdock was without fear. This is the central component to the entire issue even in the present because this incident completely colors Luke, Jessica, and Danny see Matt. It informs their belief in who he is and what he is capable of and why they are so unsure as to why he is giving up when everything they’ve have seen from him previously suggests that he wouldn’t.

Artist Iban Coello’s manga like style definitely suits and serves the fast action and motion of the flashback scene and it definitely perfectly suits Daredevil and Iron Fist. He does a fantastic job breathing motion and structure into the characters making them seem to move faster and hit harder.

Overall, the team continues to deliver a stellar series and I am extremely excited to see where he continues to take Matt on this journey of pain, fear, and discovery.