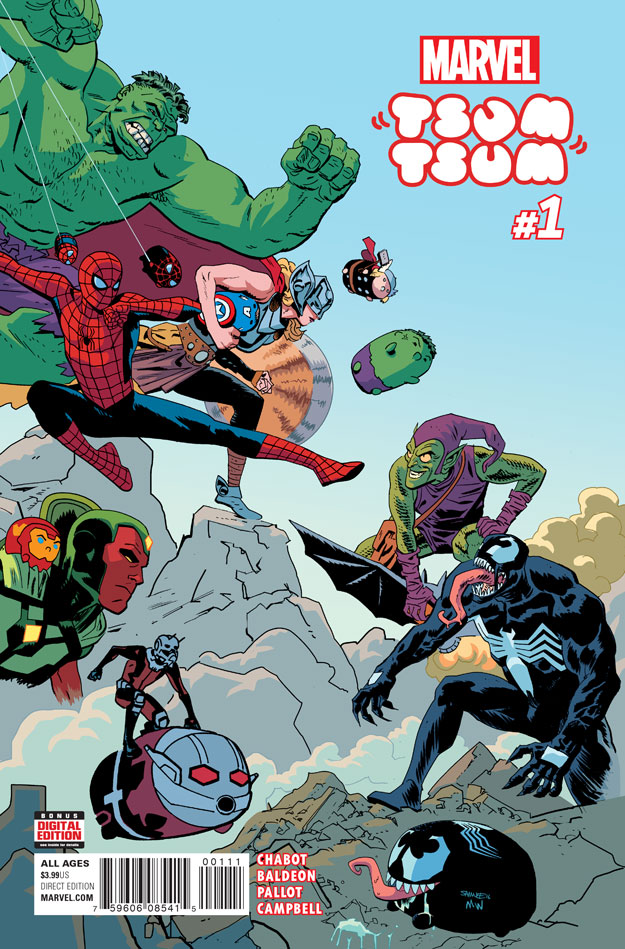 The Guardians of the Galaxy protecting the Gamarvian turtle migration leads to an invasion of the cuddliest kind as a space trucker loses a crate that hurtles through space. Comic book science meets marketing savvy in the pages of Marvel Tsum Tsum #1, courtesy of writer Jacob Chabot, artist David Baldeon, inker Terry Pallott, colorist Jim Campbell, and letterer Travis Lanham.

On Earth a trio of kids – Holly Hae, Bert Ergle, and Dunk Diggs – are hero watching, having just spotted Iron Man flying across the horizon when the spacecrate smashes into the roof on their apartment building. Dunk is apparently fixated with trying to get super powers, so he drags the spacecrate into his room, where the trio attempt to open it. Chabot gives each of these kids a personality trait and individual style, making it easy to keep the characters identified. The appearances of the Guardians and the Avengers provide Chabot with natural transitions and help to direct the story flow, curbing the blatant marketing assault.

Capably tackling everything Chabot throws at him, Baldeon fills every single panel with emotion, detail, or both. On occasion, Lanham has no choice but to obscure a bit of Baldeon’s art, but it all occurs in the preservation and pacing of the story. Campbell brings vibrant colors to the story, and seems to ratchet it up a notch whenever he plies his hues to the Tsum Tsums. Pallott’s inks match Baldeon’s pencils nicely, so much so that I wouldn’t be at all surprised to see Marvel continue operating their Mighty Marketing Machine a bit longer in order to transfer this art into a coloring book, thereby hitting three or four different current pop culture touchstones in one shot.

First, and most importantly of all,  something that I’ve been aware of since his work on Nova, and I’ve touched on it in reviews elsewhere, Baldeon is a tremendously playful artist. His drawings all have exuberant energy that elevates the energy in the story, pushing the visuals to be more than just drawings.

Secondly, Baldeon is a versatile artist, equally deft at rendering an architectural cutaway for a high-rise apartment building as he is drawing the hilariously alarmed Rocket Raccoon that readers see as the first issue of this comic.

Finally, I’ve determined I want to see Baldeon draw all the comics. Once upon a time, comic books used to be reliably kid-friendly. Sure, something like Tsum Tsum is going to skew towards a younger audience, and Baldeon’s animated, cartoon-influenced characters have baked-in energy and enthusiasm to lure readers in and lock their attention. Beyond that, though, Baldeon’s characters are acting in their mundane events, like the boys playing a video game on the couch in Dunk’s apartment or Hammerhead talking on the phone to the Looter, just as much as they do through the extraordinary events. Baldeon’s version of the Tsum Tsums (let’s face it, these look easy to draw) have personality, but are instantly recognizable as parallels to the product they represent.

When they first appear, the Tsum Tsums look like little white baby seals. The story gives them reason to shift, and Chabot moves the story along nicely, inviting readers to escape long enough to forget about the product availability.

Marvel Tsum Tsum #1 is definitely targeting a very specific niche, and they greet that niche nicely. With talent like Chabot, Baldeon, Pallott, Campbell, and Lanham, this comic capably pushes beyond the niche, giving a wider reader base a solid, playful introduction to a whole new aspect of the Marvel Universe. From here, the possibilities are infinite.