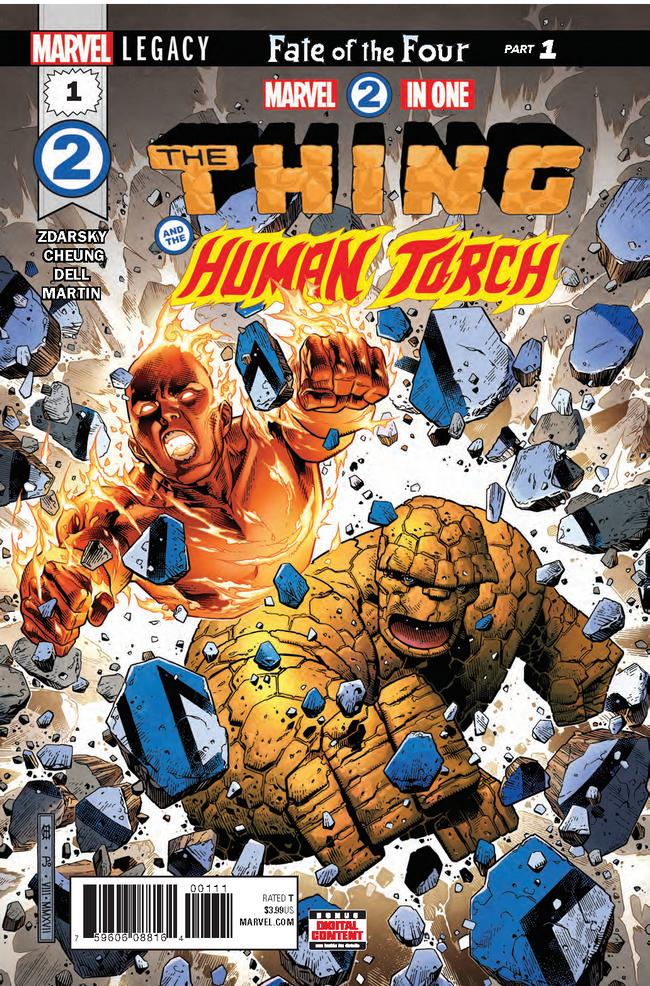 Stop me if you’ve heard this one before: I’m a sucker for team-up books. And Ben Grimm is one of my all-time favorite comic book – no, one of my favorite characters ever. Put the two together and you get a comic that gets my attention. The original run of Marvel Two-In-One is near and dear to me. Sure, it’s uneven, but it’s fun.

Which is what I expected to find in this volume, written by Chip Zdarsky and drawn by Jim Cheung. John Dell and Walden Wong ink Cheung, Frank Martin brings the colors, and Joe Caramagna pops in word balloons. Pretty stellar creative team should equal a stellar book, right? So Marvel Two-In-One #1 is a fun, stellar book?

Yeah. Sure. It’s a bit deeper than that though.

It opens with some winks and nods for Marvel fans (particularly beyond the Fantastic Four comic book pages) and a crash for Johnny Storm, which is all smoke and fire, brilliantly (but perhaps overly) rendered by Cheung. That leads to a succinct retelling of the Four that far-and-away bests the three-pager at the back of this comic (no offense, Robbie Thompson or Greg Land) before Zdarsky cracks open Ben Grimm’s orange, rocky skull and invites the reader to come inside.

The end result is a new cause for Grimm, and a quest that is without borders, filled with the boundless opportunity and waiting to be plumbed by MacGuffin-like inventions to remind readers that the two co-stars of this comic were members of one of the most imaginative comic book teams ever created. And Zdarsky telegraphs the fact that he wants to get back to that.

That makes Marvel Two-In-One #1 less of a traditional team-up comic, although we do get Marvel’s titans of team-ups sharing some panels as Spider-Man and the Thing chat about stuff in a scene that cements the heroes’ friendship and mutual interests (beyond team-ups).

Cheung’s art throughout is marvelous. He does tiny panels with the best of them, and despite Joe Caramagna’s efforts to keep Zdarsky’s script from smothering the characters in a couple panels; no one handles detailed, tight drawings like Cheung. The storytelling is exactly what the story calls for – tight and close in personal scenes, wide-angle action-oriented when things get fast and furious. Cheung doesn’t cut corners in either instance, justifying the presence of two inkers, who meld nicely one into the other.

Cheung’s characters, settings, and set decorations are exquisitely detailed, and the story stays tight enough on a handful of characters that the artist is able to keep them all distinct. Martin’s colors would help in that regard, if the characters weren’t so visually diverse as to be: 1. On fire, 2. Made of orange rocks, 3. Shrouded in mystery, 4. Wearing a tux over a Spider-Man costume. Still, Martin makes Two-In-One visually bold, opting for bright, true colors over muted tones or gradients. He screens back flashback scenes, giving them foggy transparency, as though the reader is staring through a haze or, more likely, through tears.

Caramagna completes the visual presentation nicely, opting to give Ben a human tone, rather than some forced gravelly presentation. In the aforementioned flashbacks, the background figures word balloons are clipped by the setting, trailing off the edges of the panels, giving readers just enough to get the notion of what’s going on, but not enough to distract from the true message being directed to the reader through Ben Grimm’s point of view.

That flashback angles towards Secret Wars, which is the end of the Fantastic Four as we knew them. Marvel Two-In-One is the comic that should have come out immediately following Secret Wars. It didn’t. It’s here, now, and that’s cool. Zdarsky, Cheung and crew have set up a nice launch into discovery and adventure, both personal and universal. Zdarsky even drops in a sneaky half-truth, just in case there wasn’t enough to hook the readership.

What does this all mean for the kid who loves team-up books? Well, given what 2017 delivered for me personally, Marvel Two-In-One #1 really hits me. As Ben reaches out to Johnny, it offers hope for the future, not shucking the past, but no longer wallowing in it. I can relate to both characters, maybe more than I ever could before: Ben has a sense of duty to those gone and those surviving, amplified by the message in this comic, and Johnny, well, he’s still trying to get through the grief, to learn from it, and to survive it. Marvel Two-In-One isn’t a goofy, rangy, fun-before-anything-else team-up title of yesteryear. It’s a personal exploration of two guys who became brothers, how they deal with shared loss, and what that means to their brotherhood going forward.