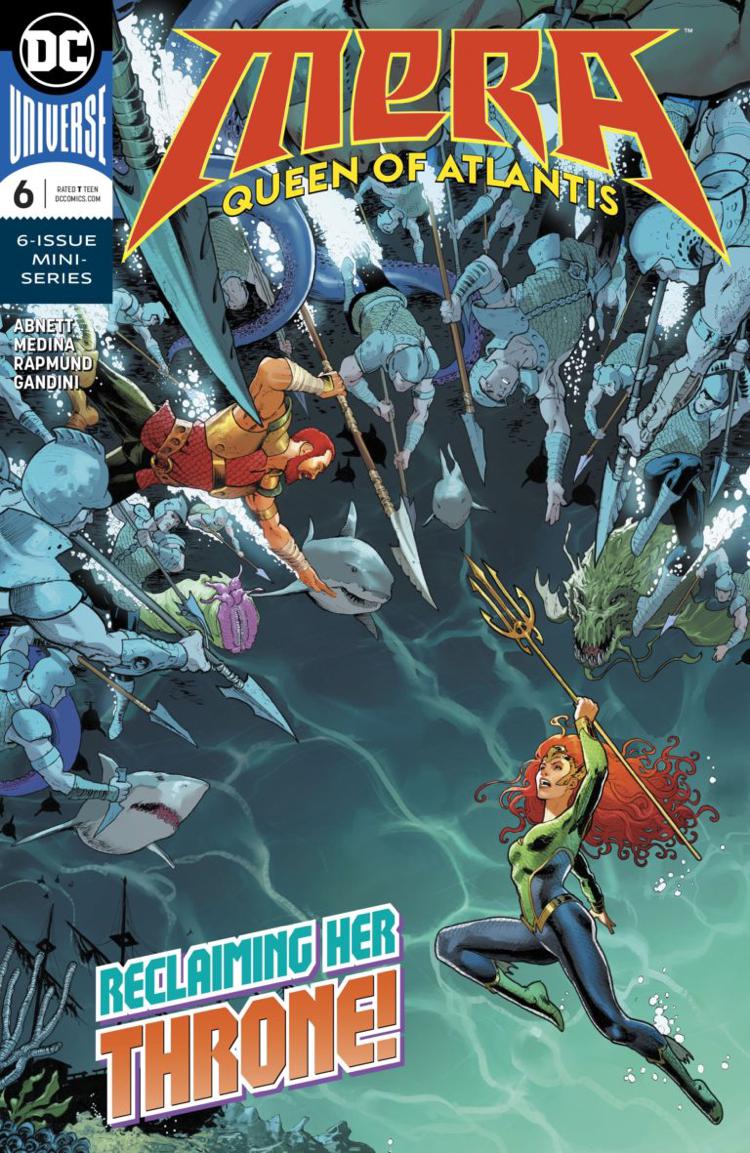 The fight driven finale of Mera’s mini-series is here. This issue is a must read for Aquaman fans, but as it says in the respective issues, it is important to read this conclusion before Aquaman #38. It lays out the whys and hows of an important plot point in the main series. Without this mini-series, Mera’s appearance over on the main title comes across as a dues ex machina.

Issue five suffered from an abundance of dialogue, little action, and the cliche ultimatum for Tula’s marital fate. This issue makes up for that with high doses of action, Mera’s take charge and cunning fighting styles, character driven decisions as well as Tula’s emotionally heartbreaking news to her newest family members.

It has been enjoyable watching Mera & Orm share a kinship, however fragile. There was little doubt it was doomed to fall apart. Orm’s turn on Mera over the course of the miniseries is very in-line with his previous characterization. This tension and Orm’s final fate could prove useful for future storylines if Abnett, or the new team taking over later this year, choose to use it.

With art by Lan Medina and ink by Norm Rapmund always shows such strong emotions in character’s faces. The expressions sell every emotion. It can often be hard to convey the ideas of a villain whose face is half covered by a mask. However, with a turn of a lip or a body stance, Medina & Rapmund’s Orm sells his vain conceit. It is clear that Orm believes that only he can be the leader of Atlantis.

There are several panels that have large amounts of water spewing from character’s mouths to show how loud they are being, surprise in their cries, etc. I cannot tell if it was completely Medina’s art, a lack of ink lines or that Veronica Gandini colors are the only thing seen on the water portions, however it felt awkward in each instance. Water bubbles from speech are not irregular in Aquaman. The series does spend a significant portion under the water. However, there was something unnerving by seeing such large amount of water displaced, by their mouths, in those panels. These are, after all, characters who can breath and live underwater.

The rest of Gandini’s color work is vibrant and purposeful. In several sequences, transparency is used to show Mera’s quick movements and attack. This makes it easy for the eyes to quickly know what visual cues to follow. It also helps the rest of the action come alive. Desaturated panels are also used to show memories and previous events of the past. They’re such quick cut aways, within the story. However, they Simon Bowland’s sound effects lettering does not try to fight or overtake the art. Instead it folds itself into small parts or lays across the bottom’s of panels working with each portion. I could hear the explosion and crunching metal without being taken out of the issue.

Abnett’s narration is done in third person limited. Throughout the mini-series I have found it comforting and other times awkward. It is at it’s strongest at the end of this issue, because it is building throughout the fight. The narration harkens back to the worries and concerns about “strength” and what it means to be strong and Mera taking her rightful place as a queen and ruler. It works to pull at you emotionally. I think the art does a wonderful job of conveying her strength and power, while the narration feels a slightly less surprising. This had to be the way the story would end.

There have been plenty of references in this mini-series, as well as the Aquaman comics, about the dangers of absolute rulers, tyrannical governments and coveting power. However, all those things seem to be saved for reflection through the story’s villains. In what is directly reflected through Mera, it is more of the self empowerment and fulfillment of destiny, despite personal wants. Somewhat of a good of the many outweighing the good of the one, type of acceptance. This might be something that is settled before Abnett’s tenure is complete. However, it’s nice to see the expectation is that it will be Mera taking the lead of Atlantis. Plus with the DC Metal connected twist ending it will be interesting to see just what type of leader Mera will be for the floundering people of Atlantis.