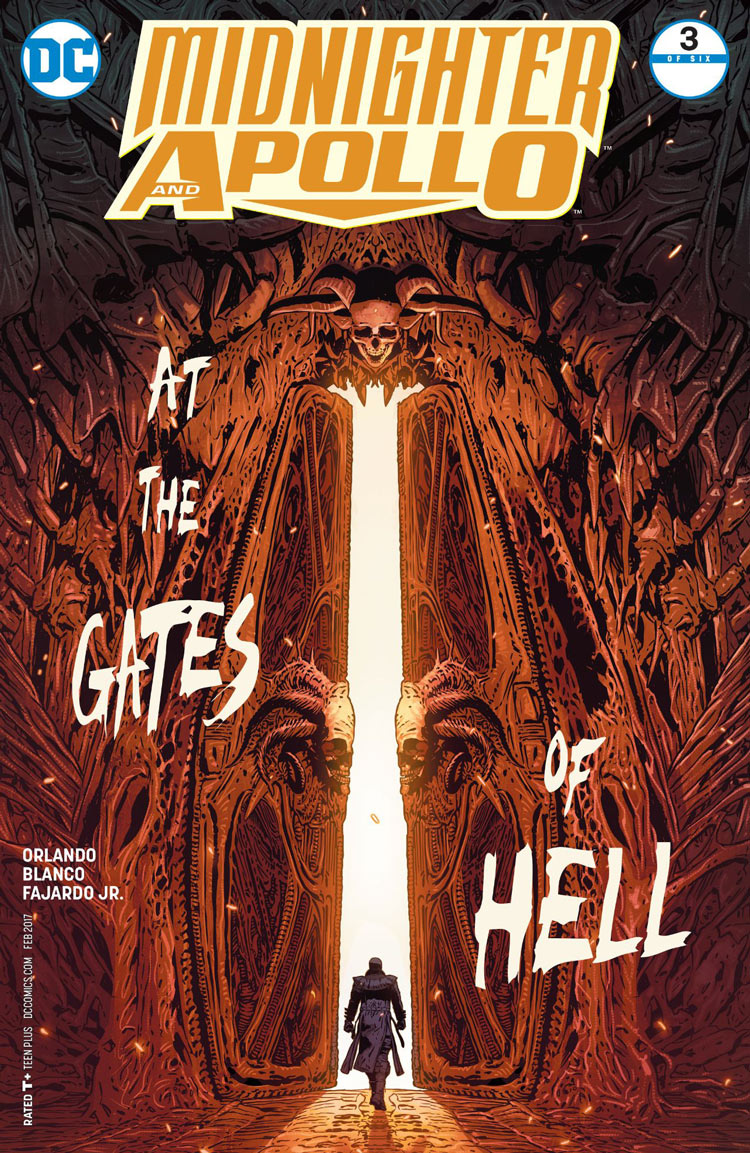 As Midnighter makes his final preparations for a descent into Hell to rescue his lost love, Apollo sits down to play a game with Neron — but the chips are stacked against him. Can his light survive in the darkest recess of the underworld, or is M simply setting himself up for failure against the Lords of the Gun.

Comic books sure are interesting. In the course of a single series, a reader can go from fighting pirates on the subway to a dinner party to visiting a South American sorcerer supreme and down into the depths of hell, where the ultimate version of Westworld is about to take place.

Well, ok. This is a very unlikely path for most comic books. But most comics aren’t Midnighter and Apollo.

Orlando clearly isn’t afraid to pull the toys out of the toybox, relying heavily in this chapter on moments from Underworld Unleashed, Hitman, and Hellblazer, all woven together and given focus by Extraño, the renovated Sorcerer Supreme. It’s one thing to have the vision to rework DC’s first gay hero as a GQ, Gen X queer bruja for a panel or two. Blanco captured something elegant and tenured in Extraño’s look in issue #1, but as we traverse through issues #2 and 3, it’s clear the artist and writer did far more than that.

Extraño is the link between worlds. He’s the conduit through which Midnighter’s computer brain meets the mystic lore that should be antithetical to any rational mind, much less a hyper-analytic one. And he’s understated at that, not in terms of his sexuality (although there does seem to be a kind of settled comfort that works as a counterbalance to Midnighter and Apollo’s rawer early day passions), but in terms of the energies he’s nudging and gliding past.

For as over the top as Midnighter’s adventure is, there’s a calmness in Extraño’s boudoir, and in Neron’s hell as well. Which only amps up the tension for what’s guaranteed to be a bloody mess of a third act.

In some ways, this felt like a difficult chapter for Blanco, with less action and more considered dialogue and careful movement than in previous issues. Yes, we get a little bit of lovely demon ass-kicking as only M can provide, but the remainder of the issue is that necessary bridge to M’s arrival in hell — a reality that Blanco immediately gives a palpable Old West feel.

The one thing about the bridge of issue #3, however, is it has given Orlando spare moments to share Apollo’s thought-process and condition in conversation with Lord Neron of Hell. It’s a smart choice, particularly given how easy it could be to just focus on Midnighter as the dashing knight in bloody armor, and it underlines how self-secure Apollo is by contrast to his beau. Despite M’s prowess in the field, he’s still a man of conflict, and Apollo, unlike most of the denizens of hell, just isn’t. He knows who he is. Knows what sacrifices he makes. And he’s OK with it. And that makes him dangerous in the underworld. Maybe moreso than Midnighter.

An introspective mid-chapter that blows out these worlds M, Apollo, and Extraño are inhabiting, Midnighter and Apollo #3 once again proves that anything is possible in comics if you want it badly enough. My favorite queer leads, a showdown like none other, and the recuperation of one of the most badly thought-out characters in history. What else could I deign to ask for?