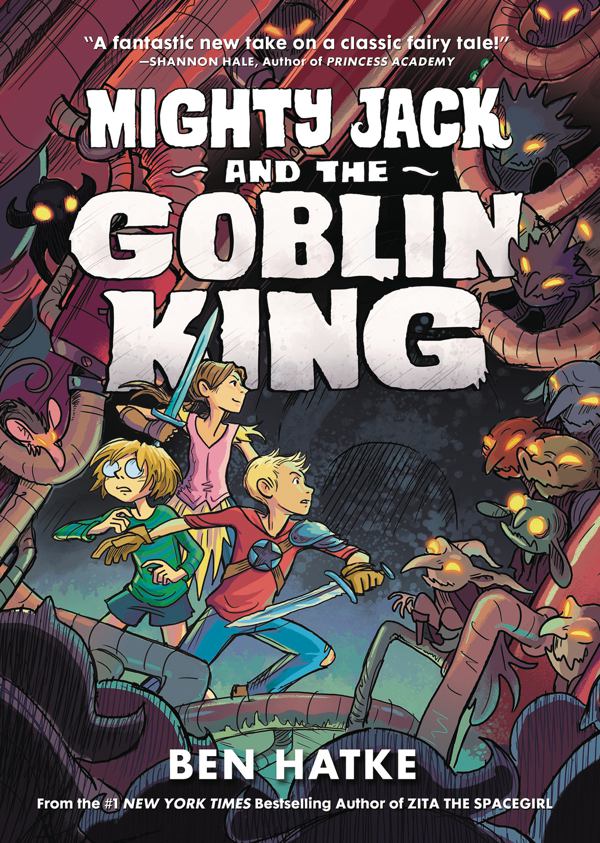 The tale of Mighty Jack continues as Ben Hatke takes Jack and Lilly deeper into the fantastical world to save Jack’s sister Maddy.

This volume of the story picks up in the middle of the action, which threw me a bit as I haven’t read the first story. Hatke does a solid job of making it so readers aren’t completely lost, though, explaining the situation for new readers and catching up returning ones in the first few pages. It was those first few pages that got me hooked, too.

There’s an energy in Hatke’s art that draws a person in. From Mighty Jack And The Goblin King to Julia’s House for Lost Creatures, Hatke’s style is expressive and perfect for a YA story like this. His work with goblins, in particular, is fantastic and when he cuts loose on their surroundings is where the magic happens. They are charming and entertaining creatures by his hand, and his unique style of language for them is great. His panel work throughout the OGN allows him to frame this story in unique ways and really showcase some interesting parts of this tale. His choice of layouts is easy for younger readers to follow, without complex double page spreads that weave in confusing ways. It’s almost like Hatke has done this before….several times, even.

Hatke’s writing is as solid as his pencil work. The characters in this OGN are accessible to young readers but he doesn’t ever dumb down the language or drama. I was entertained as an adult and this fantasy world will totally engross a younger reader. The stakes are huge at times and Hatke does a great job of conveying that to readers of all ages.

The colour work by Alex Campbell and Hilary Sycamore is rock solid. Their work adds a great element over top of Hatke’s pencil work and makes this fantastical world truly magnificent. Their work with the goblins and a particular character I won’t mention for the sake of spoilers is great and really jumped out at me. Colourists add an element of fun and energy in YA tales and Campbell and Sycamore certainly do that well in Mighty Jack And The Goblin King.

To put it simply, Mighty Jack And The Goblin King is an entertaining read crafted by a team of creators who know their audience and how to weave a visual story for them. This is a slam dunk for young folks in your world who love a good fantasy story and probably a solid bet for you to enjoy as well.