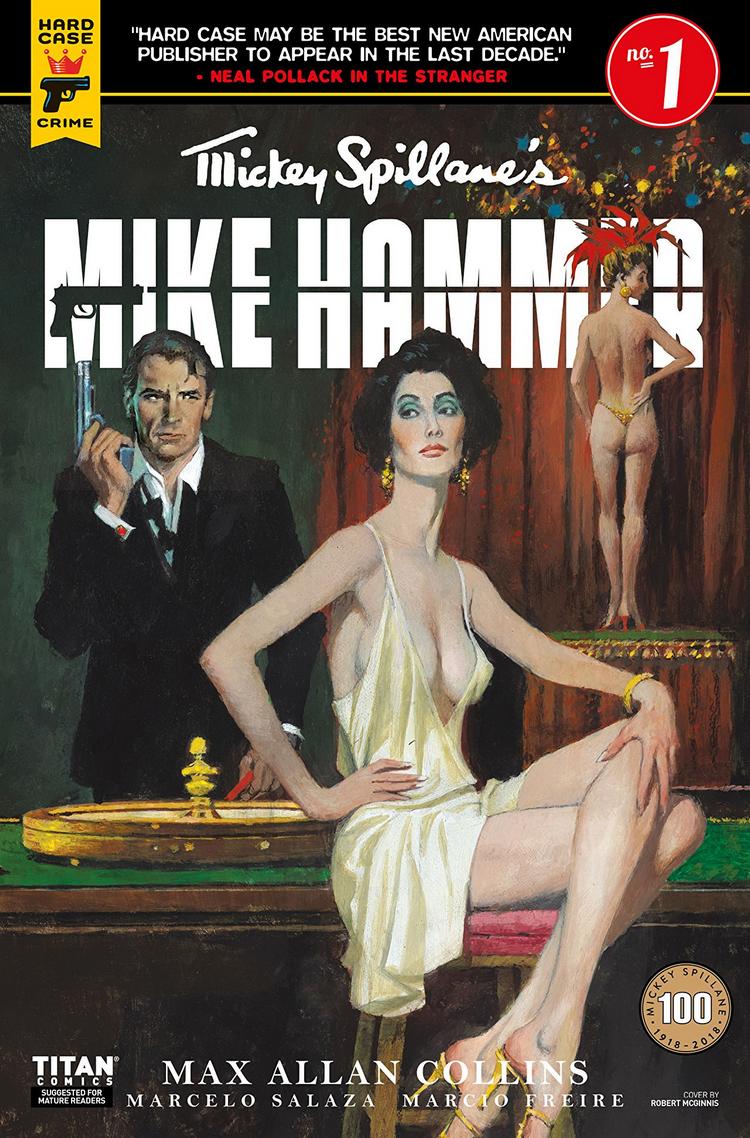 Would there have been a grim and gritty era of comics if it wasn’t for Mickey Spillane and his pulp fiction creation Mike Hammer? Maybe, but it certainly wouldn’t have featured the same hard boiled pizzazz and gleeful embrace of rogue, violent justice. Spillane’s Mike Hammer novels were a key influence on a young Frank Miller in particular and you can see that all over the antagonistic streets, clipped dialogue and mob brutality of Daredevil, Batman: Year One, Sin City and, of course, Hard Boiled, which features a protagonist who may as well be an unstoppable cyberpunk Hammer. Yet the real Mike Hammer has mostly been absent from comics, with the exception of a strip that ran for exactly a year in the ‘50s.

Crime lit revivalists Hard Case are looking to change that for Spillane’s centennial this year, working with Titan Comics and longtime Spillane library overseer Max Allan Collins (of Road to Perdition fame) on an eponymous Mike Hammer limited series based on an unused Spillane plot. As Collins points out elsewhere, Spillane himself dabbled in comics for a time, and even originally conceived of his best known creation as a comic character, initially dubbed “Mike Danger.” But the Titan release is the first time Hammer has been adapted for modern comic audiences and in many ways, the chief hurdle it has to overcome is contemporary comics’ rampant pillaging of Spillane’s works and style.

In the first issue’s opening pages, the reader runs straight into that problem as we’re introduced to Hammer in a chase scene that would have stuck out for its anti-hero brutality in the ‘50s but now seems borderline quaint. Over a Sean Phillips-esque city backdrop, Hammer pursues a mob assassin, looking for revenge and answers in the case of a friend’s murder. The assassin leaps over a rooftop but doesn’t quite make it. Hammer is ready to let him plummet but the man bargains for his life, swearing he’ll give up his employer if Hammer just pulls him up. Hammer seems to go for it at first, only to let the man drop to his death right as he’s thanking Hammer for being a man of his word.

Throughout the first issue, we get a number of scenes like this communicating Hammer’s heartlessness and inhuman discipline. Hammer might be a private detective in occupation but in identity he’s a ruthless machine, concerned only with striking down his enemies no matter the costs. In Spillane’s books, Hammer is a self-confessed misanthrope, and it’s that refusal to be a do-gooder that made him stand out in his era. Collins doesn’t provide a lot of details or ambition to make the unfamiliar give much of a fuck about Hammer in a modern era where misanthropy is mainstream, though. Instead, he mostly seems concerned with endlessly driving home Hammer’s fearlessness and grit.

Hammer barrels through danger and betrayal in panel after panel as he hops from investigating the murder of his friend to a shady meeting with a mysterious stranger at a mob den, exerting as much emotional energy loading a gun as he does killing a traitorous lover. The takeaway is that Mike Hammer has become so hardened he’s essentially the same as the lowlifes he hunts, emotionless and devoted to the thrill of living outside the law. Even the hints about his background are so vague they may as well not even be there, like when a wounded veteran claims he knows Hammer from “the war” and he responds “We were all in some war or other, captain.”

If you’ve read modern mainstream comics anytime since the 1980’s, you’ve encountered this type of character countless times, be it Miller’s Batman, Ennis and Dillon’s Punisher or Chaykin’s revamped Shadow. All three blatantly (and thrillingly) pulled from Spillane’s Mike Hammer material and though it’s not at all fair that modern readers will think of those iconic works before Spillane’s, a quick look at what happened to Disney’s John Carter shows it’s nonetheless likely to be the case.

Even so, this would be surmountable if Mike Hammer presented something fresh, like Brubaker and Phillips regularly do with their Criminal franchise and its adjacent series Fatale and The Fade-Out, which get ample mileage out of their creative use of disparate genres. Alas, Collins is overly beholden to remaining faithful to his late mentor’s style without updating it and his artistic collaborators Marcelo Salaza and Marcio Freire don’t have the aesthetic capabilities of a Phillips or Vanesa R. Del Rey to make the antiquated material come across as vintage cool rather than stiff.

This lack of discernible aesthetic identity for Mike Hammer’s creative team results in a book that feels cheap and bland in a way even the pulpiest of fiction doesn’t. Salaza’s figures have all the life of badly rendered 3D video game models and occasionally even have the same glitchy limbs – in one amazing sequence in an underground casino, a woman’s arm appears to not only be broken, but also to be growing out of her breast. Freire’s inconsistent coloring also leads to the characters’ faces alternating between a rubbery texture and an unsettling glassiness, both of which get in the way of any kind of emotional or dramatic impact in the dialogue heavy scenes. Perspective issues run rampant, too, causing a kind of comics vertigo to set in.

It ultimately feels like everyone involved except for legendary cover artist Robert McGinnis lacked the know-how to make Hammer’s modern debut meaningful, particularly when you factor in the bullet-riddled interior book design and Tom Williams’ uninspired, hacky lettering. For a new Mike Hammer comic to work, it needs to break new ground and offer up something visually interesting enough to make readers feel like they’re seeing something new, even if they recognize the beats and tropes, as Rian Johnson so capably proved with his debut film Brick, itself a Spillane descendant. What we get instead is on par with the worst of the Hammer film adaptations – rushed, awkward, forgettable.