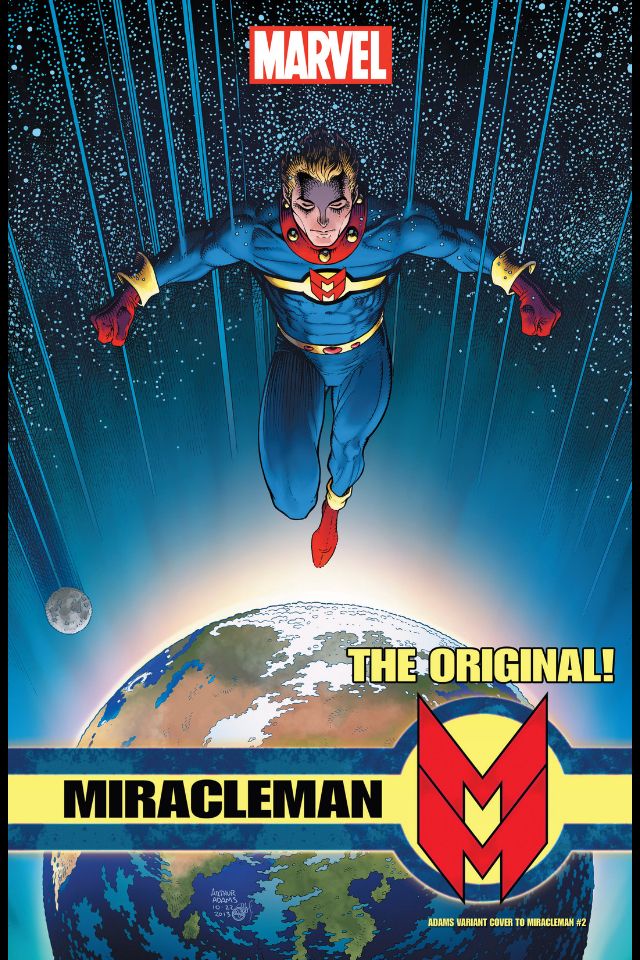 The final chapters in Alan Moore’s legendary run on Miracleman are here, taking the hero from man to god alongside both the ingénue Miraclewoman and his former sidekick, now insane mass murderer, Kid Miracleman. A time of change has arrived for all of them, but — more importantly — for the world, as Olympus is rising. And humanity will never be the same again.

The trouble with Miracleman is you never can tell if what you’re feeling or thinking about it is reasonable. A book that was almost completely unavailable for over 25 years, but spoken of in hushed, reverent tones, Miracleman — particularly under the pen of Alan Moore — functioned as an inspiration for a generation of comic book writers today.

But (and this is a big but) until now, more contemporary readers had read ABOUT the character of Miracleman than actually read Miracleman. I myself own a Companion to the series, but only read an issue here or there I’d been able to find scans of on the internet (during years of unavailability, of course).

So, how do you assess a book that, like the character himself, has already ascended to the clouds as the epitome of smart, classic comics of the 1980s? And how can one be sure it deserves that reputation when it seems like it’s been propelled into that honor through unavailability as much as actual analysis?

Truth be told, Miracleman Volume 3: Olympus echoes and betters so much of the work done during its time period. More philosophical (and if you can believe it, violent) than Watchmen, more ingenious in style than The Dark Knight Returns, it’s easy to see how it led directly into an era of Vertigo-style comic book writing and art spearheaded by Sandman. 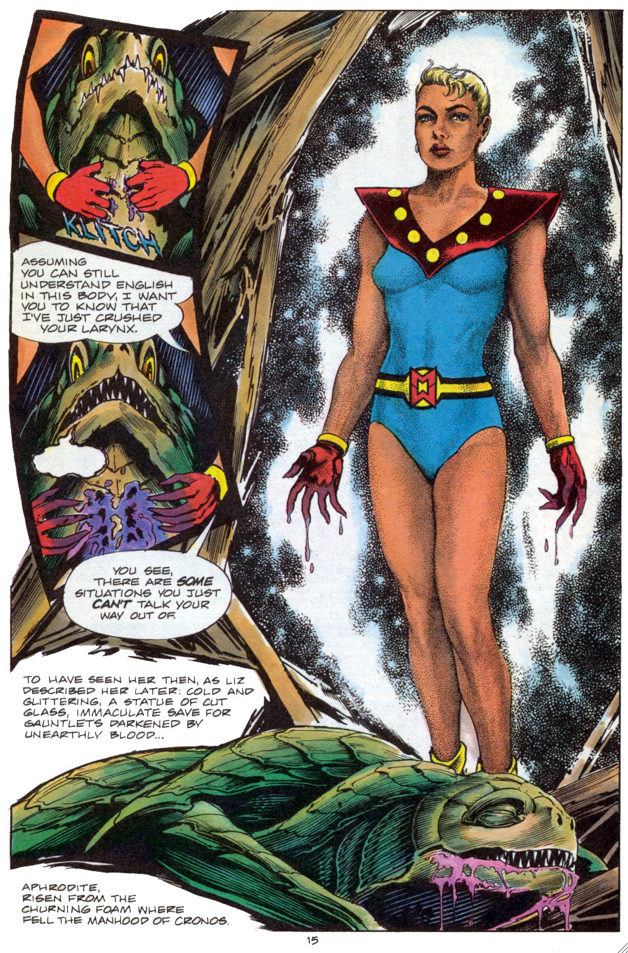 Totleben’s art style is very realistic and grounded, never letting the more fantastical elements hover too far above the ground. His page layouts are sharp and dagger-shaped when in the midst of a battle or conflict, more amorphous when dealing with introspective or dream-like moments. The detail in his carnage is unforgettable, but so too is the grace with which he delivers Miracleman and Miraclewoman’s bodies when they are using their powers. Like a dance through the air, ultimately culminating in sexual release, the figures on the page feel almost as if they could tumble weightlessly off the white paper and float before your eyes.

There’s something too about the Totleben stare that not many artists today can manage in the faces of their protagonists. It’s not just the pure evil of the grown up Johnny Bates as he takes on the world — and wins. It’s also the wistfulness of Miracleman himself, prone to staring off into the beyond, as if just behind the reader, there is a better place he longs to reach.

The trouble, however, in Totleben’s layouts is their shared real estate with an enormous amount of text by today’s standards. Moore used all the words to make Miracleman, and I hate to admit that my eyes glossed over at a point just to get to the next page. It’s a real disconnect in how we read today versus in 1987, how we read a collected edition versus a single issue, and how Moore’s own style is just so different than those he inspired later. There’s a weight to these words that likely felt unique amid the more straightforward super-hero fare of the 1980s, but today has for me a sense of overwroughtness that’s hard to penetrate.

What Moore’s prose did unquestionably do, however, is take the super-hero genre and infuse it with poetry — both literal and metaphoric — giving Miracleman and his “family” a dark history and future, yes, but also a glory and spiritualism that no one had infused into someone like Superman or Captain Marvel before. 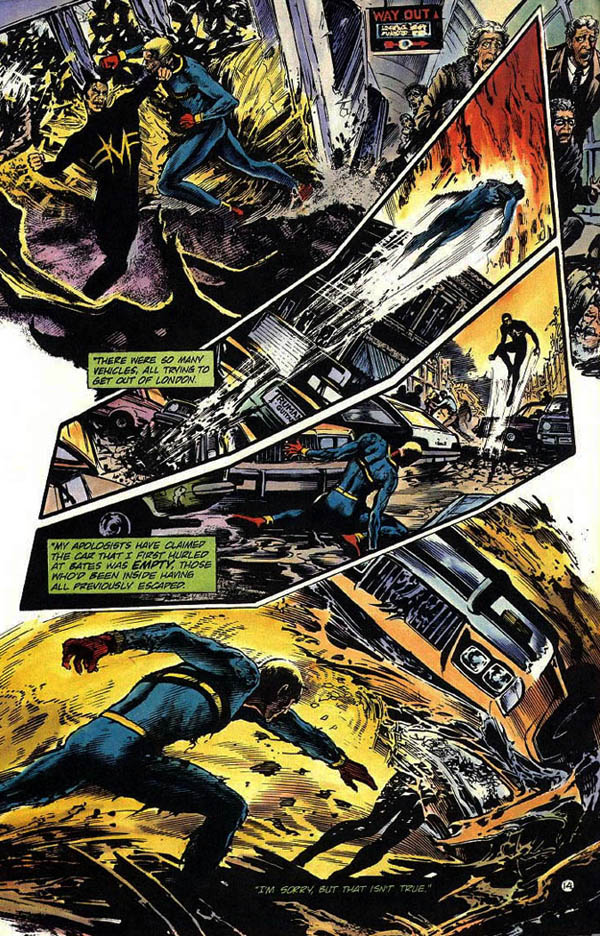 Where Moore missteps, in my opinion, is where he almost always missteps: in the depiction of women and, more specifically, women as victims of rape. With Miraclewoman, there’s such a casual violence and strange voyeurism to the story of her creation that it’s difficult not to feel ill when you read it. There’s a line crossed here that shatters any agency that character could have under Moore’s pen, and that’s disappointing to say the least. It casts a pall on the remainder of her story, which, rather than running parallel to Miracleman’s, now serves as a deep reminder just how unequal women and men are in super-hero comics of this era. And in many cases, still today.

This volume includes the other famous rape scene of the series, of course, as Kid Miracleman falls victim to his bully classmates. But again, instead of Miraclewoman’s calm “I just took it. It was weird.” reaction to repeated violation, Johnny lashes out and massacres half of a metropolitan city in the most gruesome manner possible. Villainous, yes, but fully his own agent. It’s an inequity that’s impossible to ignore.

So, ultimately, there are two books to review here: the Miracleman of 1987 and the Miracleman of 2015. Vastly different narratives with the same words and pictures, these two stories serve as a fascinating reminder in some ways of how far we haven’t come in the treatment of women in comics, how much of what we read today across companies could never have been possible without this, and that sometimes, the allusion to a myth is different than the myth itself.

Is this book worth reading? Unquestionably yes. Should it be taken to be a masterpiece at face value? Certainly not. Is there anything we can learn in the process? Always and forever yes.

(Note: this volume also includes a reprint of All-New Miracleman Annual #1, reviewed in its entirety here.)