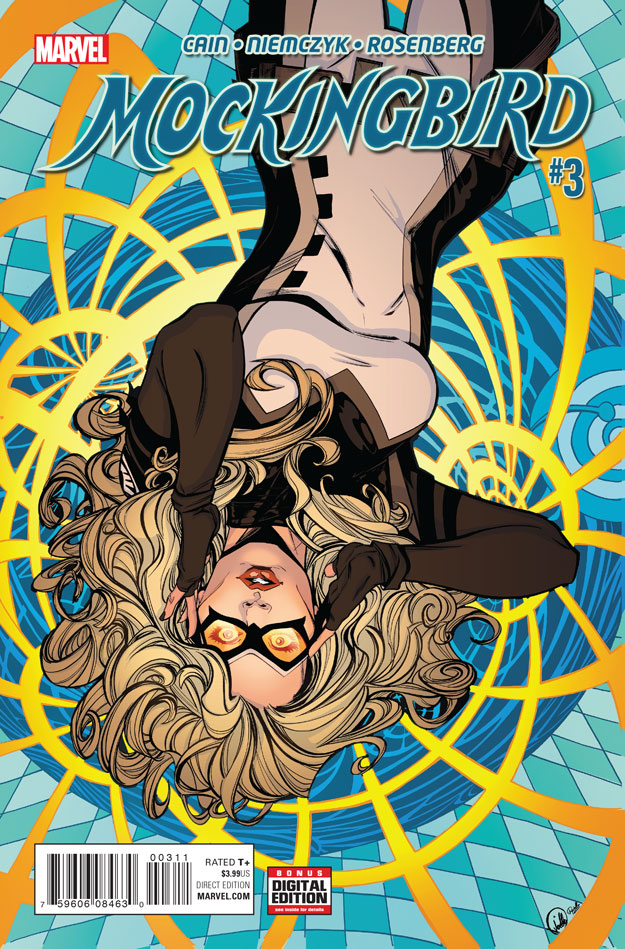 Mockingbird continues to deliver superhero comics’ most engaging and incisive grown ass woman with an issue built around a Jane Heap quote that doesn’t need to make it onto the page for its presence to be felt.

Using powers as metaphor is the lifeblood of the Marvel Universe, particularly when it comes to the winding history of the X-Men being leveraged as a catch-all other. One of the most prominent motifs in Marvel storytelling that reaches far beyond Westchester is empowering the marginalized and disenfranchised to varying effect.

Pencil-neck Steve Rogers was elevated into a super soldier so that he could not only serve his country, but lead it. Nerdy Peter Parker was empowered by a chance encounter with a radioactive spider to answer back against a world that filled him with resentment. It’s a pattern that has continued through to the likes of Miles Morales and Kamala Khan, but Chelsea Cain flips it on its head by presenting powers as a metaphor for privilege, and white male privilege in specific.

In a savage critique that has likely earned its share of well deserved hoots and hollers from the readership, Bobbi describes the lengths she went to as a child to get superpowers, always coming up short. She observes that all her heroes had something she didn’t, and it wasn’t powers. It was a Y chromosome. Could I take issue with that, being decidedly female and having one of those? Sure. Am I going to, nah, not really. I know what side of that divide I’m on, whatever the word choice is.

There’s a delicious irony to Bobbi saying that she abandoned her dream of being a superhero for math and science because of the overwhelming masculinity of the gig, because we all know about sexism and STEM fields, right? There’s a powerful message there about dreams deferred by exclusion and it gets deeper as issue goes on.

Bobbi wound up being a superhero of sorts, one far from the public eye, and the real kicker is that she achieved the same end goal to less acclaim by fighting harder to achieve it. “Twice as hard for half as much,” isn’t a superhero mantra, it’s the message that Scandal heroine Olivia Pope inherited from her father to describe what it would take for her to achieve success as a black woman and is more or less the same sentiment delivered by Bobbi in sarcastic deadpan here.

Last issue was just pure fun, giving Bobbi the chance to horse around and flip the tables on how gender and desire is typically framed in Hellfire Club stories. This issue examines Bobbi’s journey to become the sassy super spy we know and love, digging into her childhood and how she grapples with deferred dreams and the lingering doubts that mushroom into impostor syndrome.

By sequencing it this way, Cain has consciously chosen to serve dessert first, which is a key part of why Mockingbird is so transcendent and more female writers should be getting a shot at the most iconic female characters in comics.

There certainly are men that have proven themselves capable of writing compelling female characters and are frequently celebrated for it, but the kind of incisive commentary and self affirming thrill that a comic like Mockingbird delivers can only come from lived experience. This is particularly true of the narrative of girlhood presented this issue that moves from approaching superpowers as an analogue for male privilege to a metaphor for puberty and the specific otherness ascribed to girls in a patriarchal society.

Power is gendered and as the story shifts from Bobbi’s childhood of feeling excluded from the masculine conception of it to the fear and trepidation at a young girl manifesting abilities of her own, the ways in which that occurs achieve a frightful clarity. Had Bobbi gotten her wish and been empowered by her various childhood exploits, she wouldn’t have joined the ranks of Captain America and Namor, she would have been encircled by jittery police with large guns the way that Rachel, the sixth grader holding her friends suspended above her in a rainbow bubble is in the present.

Which is where the ever lurking Jane Heap quote surfaces. “If there is anything I really fear, it is the mind of a young girl.”

It’s exploded into the dimensions of the Marvel Universe, but this is how we treat girlhood and exceptionalism as a society. When Bobbi arrives we see her throw her weight around and take command of the situation, delivering the same kind of vicarious thrill as her displays of power last issue, but as the scope of the situation becomes clear, we also see that much like it takes a team of women to achieve what this comic does, only Bobbi can cut through the absurd mystique that the police have built up around girlhood to properly understand Rachel and diffuse the situation.

On the whole this is Rachelle Rosenberg’s issue to shine on, dipping into the brightly saturated palette she’s brought to previous issues in an expanded and foregrounded way as Rachel’s power to drain color and project rainbow energy fields takes center stage. It’s as beautiful as it is silly, but of course why wouldn’t a sixth grader’s superpowers mimic the psychedelic color palette of Lisa Frank stationery sets?

As in previous issues, Kate Niemczyk’s art remains the center of gravity that the comic revolves around, using her style to establish the tone and properly convey the inflection of Bobbi’s dialogue. Without fluid movement or audio, tone can be difficult to discern or pin down in a nuanced way, especially when presented in captions where facial expressions can’t be used to point the way. Instead, Niemczyk provides contextual clues in Bobbi’s demeanor in the panels accompanying the captions, allowing for a synthesis with Cain’s word choices that reads as a particularly dry sense of humor.

For all its surreality, hypersaturated colors, and sarcastic delivery, Mockingbird remains a deeply thoughtful book that goes beyond simply referencing or paying homage to the pressing issues of contemporary womanhood, but weaves them right into the mythic structure of the universe it lives in, doing so in a way that no other female superhero book on the stands is able to.

The lion’s share of female protagonists in mainstream comics are presented as twenty-something misfits who struggle to achieve a balance between personal, professional, and heroic concerns, and while there’s certainly a lot of fun to be had with that conception in books like Patsy Walker a.k.a Hellcat, Harley Quinn, and Starfire, Mockingbird’s conception of Bobbi as a Grown Ass Woman who has moved beyond those issues to achieve not just balance but virtual superiority over her peers comes as a breath of fresh air. Character flaws as the end all be all of relatability in female heroines is an ongoing problem in a medium that was founded on creating fantasy and aspirational figures for boys and young men.

Imagine a pop culture landscape with no alternative to the perpetual girlishness of Ariana Grande and Taylor Swift. Music without the fully realized womanhood of Beyonce or the transgressive thrill of Rihanna’s aggressive sexuality. Television where Pretty Little Liars, Girls, and Broad City rules the landscape with no Good Wife, How To Get Away With Murder, or Scandal as a counterbalance. That is, for the most part, where we find ourselves in comics.

Bobbi Morse doesn’t meet us where we are or recapture where we’ve been. She gives us something to root for and aspire to. The kind of figure she was denied in her own youth.