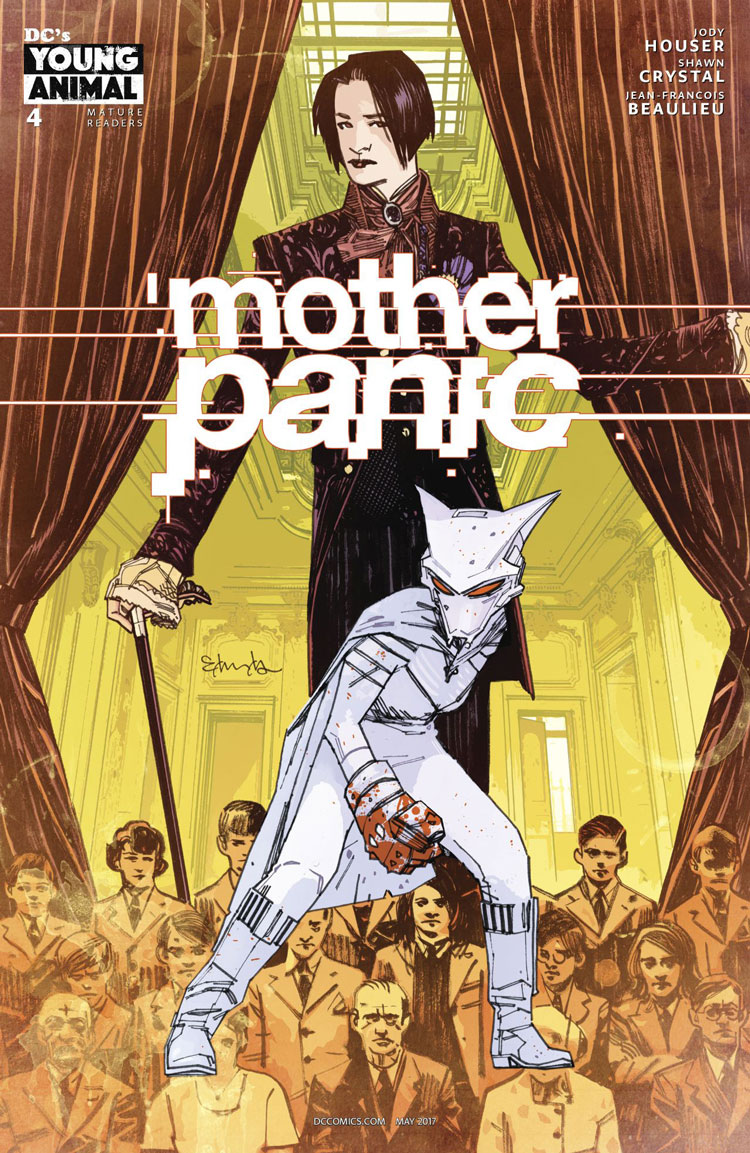 “Taking a chance here. But I recognize that look. Enemy of my enemy. Gather House tried to break all of us. They shouldn’t have let the pieces loose.” More is revealed of Violet’s horror-ridden past at the Gather House in this latest installment of Mother Panic!

Houser is as strong as ever with her writing. I love the standoffish attitude of the infamous Violet Paige as well as her outbursts of empathy. There’s a deep wound in her that’s never fully healed, one surrounding her past at that ominous boarding school the Gather House, and it has truly changed her into what she has become, as well as possibly others from the school. I look forward to seeing who else appears from that place and if they, like Violet, have a need for vengeance.

Mother Panic has switched its art team from Tommy Lee Edwards to the art of Shawn Crystal and coloring of Jean-Francois Beaulieu and it is drastically noticeable. While I do like the work that Crystal and Beaulieu do in this issue, I will say it’s a bit of a jarring shift.

Gone is the messy anarchistic atmosphere of Edwards and in comes a softer, cartoonier, warmer aesthetic which leaves more wiggle room for kinder and funnier scenes. It’s not the grunge of the previous issues, but I would say it’s a nice reprieve and makes Mother Panic feel like less of a story about a suicidal woman out for a revenge that will slowly ruin her and drive her insane.

While the coloring keeps some of the almost hallucinogenic feel that Edwards brought to the table, the colors pull away from a tone of slowly losing one’s sanity to a LCD rave to a more punk pop palette. It goes with the newer feel to this issue of Mother Panic that Crystal brings with his art, but I am going to miss the hysteria inducing pinks of the previous arc.

The lettering, as always, is a real treat and I love how Crystal’s lettering compliments the already great work done by John Workman. The “BOOM” of the science building explosion, the echoing “WUUH”s of the fire alarm, the “CRUNCH”s of computer screens—the all go really well with the unique word bubbles Workman has brought to the table. What can I say? I’m a sucker for great lettering.

If you like Mother Panic already, I do recommend this issue (if you haven’t read Mother Panic, though, seriously, what have you been doing with your life?). It veers away from the original tone of the comic, yes, but I still think this is a solid issue and I’m looking forward to “Broken Things Part 2”.