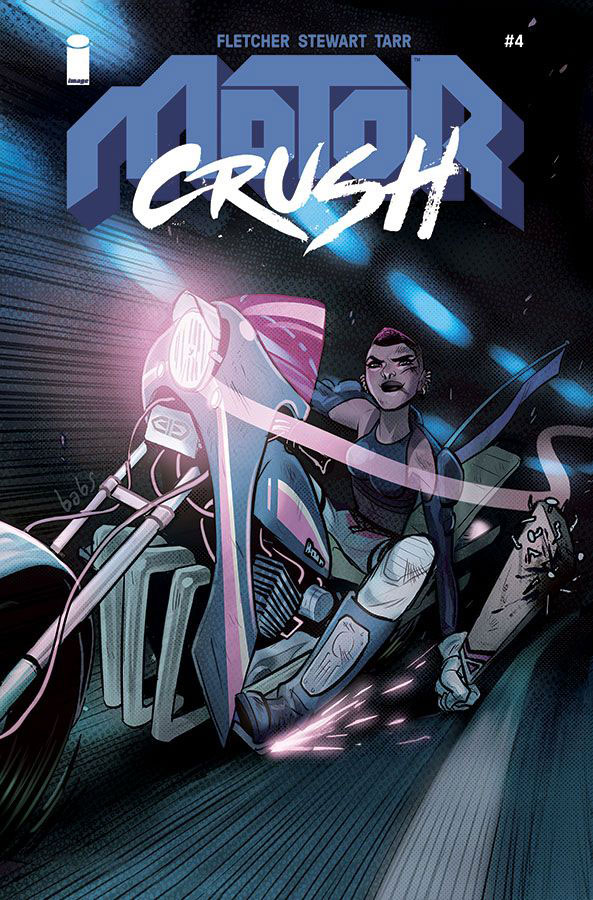 “Sullivan Swift should have never removed the child from that car…you were not his to take.” The mystery around Domino’s origins deepens as a few questions are answered and even more questions creep out of the shadows in this issue of Motor Crush!

Fletcher, Stewart, and Tarr have created an enticing mystery revolving crush, Domino’s origins, and her ties with the motorcycle dope chemical. The more we learn, the more mysterious Domino and where she comes from seems to be.

I’m excited to delve deeper into the world and truly find out her origins and her connection to the ominous helmeted man. Domino in general is a great character and I love her relationship with Lola, it’s very bittersweet.

Stewart and Tarr’s work on the art is magnificent. I love the character design, I love that they show a variety of body shapes in the comic. I love the design of the backgrounds as well, especially for places like Motor House Park. Retro-sixties futuristic is very in tone with the overall comic. Each part of the park feels so intriguing, though, I wish the park goers were keener on wearing helmets and kneepads or something for their own safety.

While I’m not sure which person did the coloring, I did love the coloring in this work. The pink shades surrounding the comic that harken constantly to crush is cool and I love how kaleidoscopic certain people become when they take a full dollop of crush, it’s mesmerizing. The black and white in the flashback is a nice touch as well.

I love the lettering in Motor Crush. Aditya Bidikar has outdone himself. The roughness of the sound effects works well with the scenes they’re in. The WGP notes by Tom Muller on locations are always fun, like some strange pop up that wants your attention. The distinctness between Domino’s thought bubbles compared to the rest of the speech bubbles is a nice subtle touch.

Motor Crush is a fantastic comic you should have been already reading ages ago. Should you start at issue #4? Probably not, it’s definitely better to start at the beginning. If you like super cool racing, not so distant future looking comics that are something between Speed Racer and Blood Plus, this is something you’d probably like.