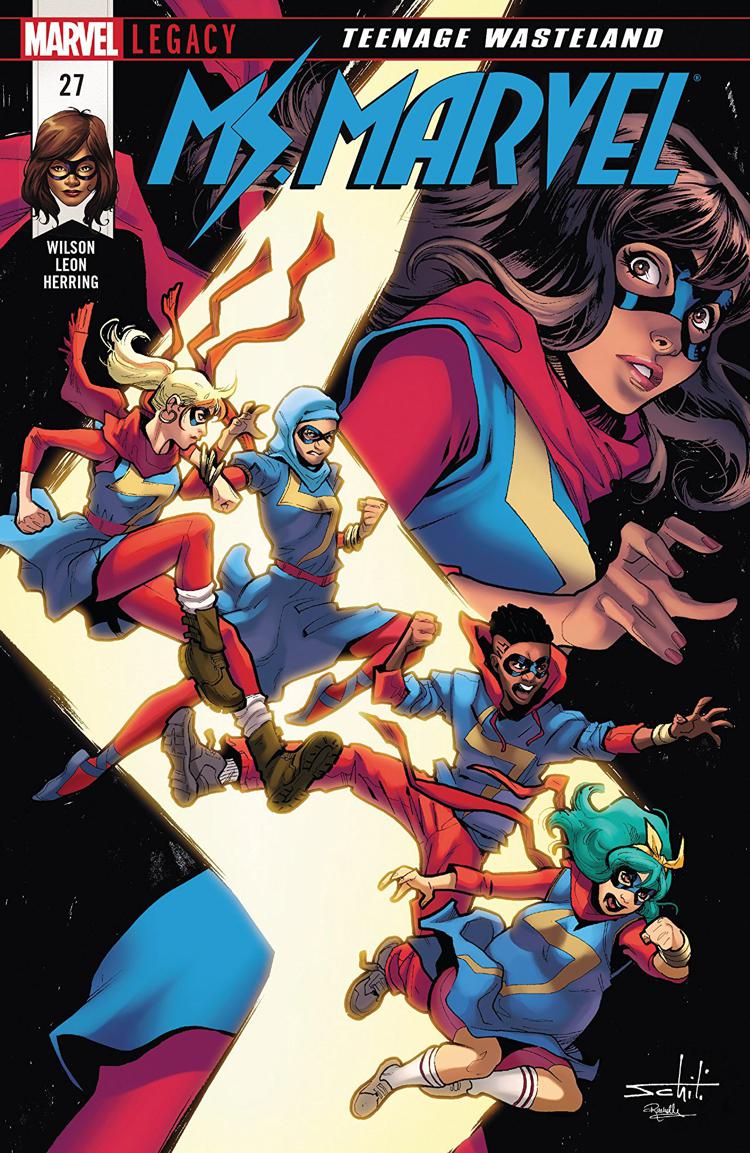 “What is the real Ms. Marvel, ontologically-wise?” asks Gabe, in part three of the Teenage Wasteland story arc. He says this as he and three friends are all dressed as the titular hero and realizing that they’ve gotten in way over their heads in their efforts to fill Kamala’s shoes during her mysterious absence. After our heroes realized in the previous issue that there is something shady going on at the Sundown Senior Sanctuary, where the residents keep disappearing, Zoe and Harold (a resident at the senior home) go to investigate. Their friends Gabe, Mike, Nakia decide to investigate. Meanwhile, Naftali goes looking for Kamala around Jersey City. In this issue, we’re about to see Kamala’s friends go from patrolling the streets to taking the next step by confronting a villain, coming into their own as superheroes.

G. Willow Wilson continues to be amazing on this series, creating character dialogue that lands and is memorable, even during the everyday conversations. It’s difficult to imagine anyone else writing this book after she has so solidly defined the characters voices and personalities. Even though comics is a visual medium in which the artwork does so much of the storytelling, Wilson’s words are often just as memorable as the artwork. Her dialogue is often hilarious, even in dangerous situations, and the characters read like real teenagers having real conversations.

Nico Leon has been a recurring artist on this series, penciling several issues since his first on this series, which was number four. Even though the original artist on Kamala’s story set a very high bar, Leon has been one of the artists who have lived up to that standard. I love the characters’ facial expressions and the detailed backgrounds. I’m always glad to see that the visual gags have been continued throughout the series, giving the reader reason to re-read and reexamine the panels in the book. Ian Herring’s colors have been consistent throughout the book and have given it a similar feel, even when different artists were doing the linework in the art. The series is bright and uplifting, with coloring to match. A special shoutout also goes to the cover artists Valerio Schiti and Rachelle Rosenberg, who made an effective choice by using the visual of a character in the background overlooking the characters she has inspired, but in this case, the “old” character is herself a relatively-new legacy character. The incorporation of the Ms. Marvel logo into the image is a nice touch, too.

This arc calls back to the “Generation Why” story arc in Ms. Marvel Volume 3, #8-11 in terms of its nemesis, themes, and character interactions. Some echoes of the previous arc include memorable statements about inter-generational conflicts, defeating a force that’s cynically using people for nefarious ends, and the importance of teamwork. Unlike the previous arc, which focused on teenagers commenting on the way that adults view their generation, this arc focusing on teenagers being inspired by older generations to do the right thing. It seems especially fitting to bring this theme back given Marvel’s recent Legacy relaunch, during which many of the older characters are returning.

It’s a fun issue that provides something positive. It’s a testament to how beloved and memorable the secondary characters in this story have become that they can carry an arc by themselves without Kamala around. This particular issue is heavy on the action, but it doesn’t skip out on the conversation or story themes. There are moments when we see the characters friendships with each other come through, including interactions that we would usually see in the background of Kamala’s story which get a chance to be in the forefront in this arc. The surprise reveal at the end is exciting, too.

The Ms. Marvel series manages to be consistently sincere in its humor and optimism, even while tackling difficult subjects. There are many times when I’ve opened an issue of Ms. Marvel with trepidation, due to a subject matter being handled or where story arc seemed to be headed. Although I have my favorite issues and my criticisms, the series has been consistently wonderful. This arc and solicits for the next few issues are making big promises, and I can’t wait to read them. As I say at any opportunity: if you like superheroes, read this series.