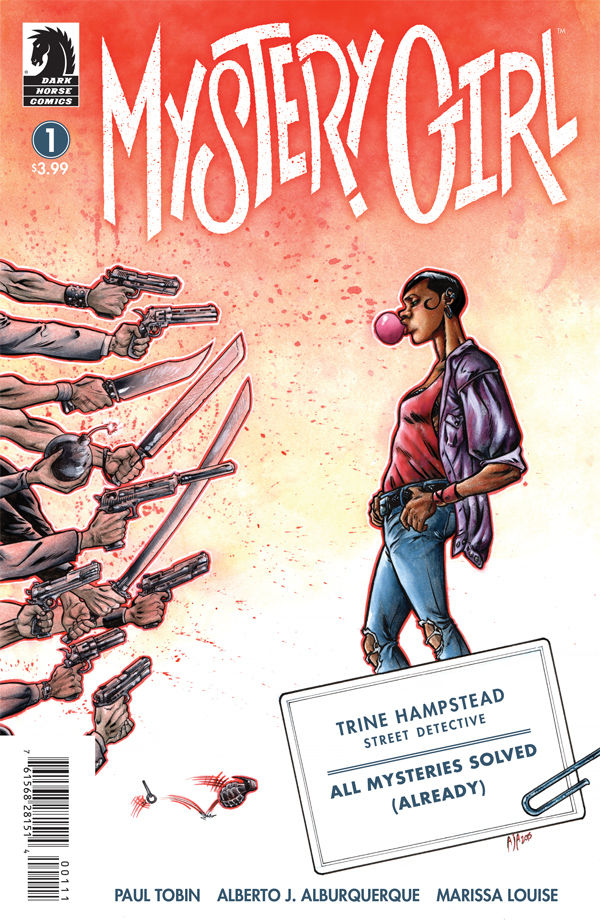 Who is she? WHO IS SHE?! That’s the question on everyone’s lips when they think of their own personal mystery girl. But, in a brand new series from Dark Horse, written by Paul Tobin and illustrated by Alberto J. Alburquerque, Marissa Louise (colors), and Marshall Dillon (letters), we know exactly who she is, but just not how she does what she does. So, what exactly is going on here?

Mystery Girl is not your typical private investigator story. I’m fairly certain things could never be typical while following Trine Hampstead as she performs her street-level sleuthing. Mystery Girl #1 is like talking a short walk around the block, interacting with the community members you know and care for, and then deciding to turn that short walk into a long trek across the world. Trine solves a variety of mysteries for people from simple misplaced items to whodunnit crimes. She doesn’t do the detective work in the usual way however, as she seems to know the answers before she even starts investigating. She’s not sure how she got her so-called powers, but she does know she want to make the journey to the chilly tundra to find a wooly mammoth with her latest client. Trine might be biting off more than she can precognitively chew when a man with another set of powers seems to have her in his sights.

Tobin has spun a pretty interesting tale here. I enjoy mystery books. I like watching characters figure things out (most of the time) one step ahead of you, putting everything together in a grand fashion and getting the baddie behind bars. What’s so intriguing about Mystery Girl, is that you get the latter without much, if any, of the former. Trine already knows what’s up, she already knows how to solve the problem, yet somehow I still get that satisfactory feeling when all’s said and done. Tobin has paced this story really well, allowing you to really get a feel for Trine’s power and the setting for this story.

The dialogue is fun and quirky and overall; there’s an air of mystery about this entire book, not just around Trine herself. A couple of times, I felt some decisions in scripting were made that jostled the story a little, like when Trine, after steadfastly refusing to divulge her power to someone earlier, tells the story the next time when asked without much reason to. I also felt like I didn’t really get enough of a feel for who Trine is, outside of her ability to solve crimes. I would have loved to have gotten a little more character information for each of the main players. However, these things don’t pull you from the flow too much, and there’s much more here that’s good than less good.

Alburquerque does a fantastic job in bringing this story to life. He has a distinctly cartoon-y vibe to this story that I really enjoy. I’ve really loved his work on Letter 44; his over-emphasized facial features do well to propel the emotional side of the story. Alburquerque has designed the characters well. Trine has a suitably laid back feel to her character, smartly depicted through Alburquerque’s ability to use body language and facial expressions effectively. He commands your attention in his line art, providing ample detail in each panel. Alburquerque’s art is made even better with Marissa Louise’s colors. The panels are vibrant, the characters are given full attention. The backgrounds are still beautiful, even when minimally colored. There are a couple panels that use a great technique of keeping the surroundings singularly colored while spotlighting the character in full color as they move through the scene, and it’s really beautifully utilized.

Mystery Girl #1 asks a lot of questions and leaves most of them open by issue’s end. This is a solid first issue, showcasing an interesting twist on a sleuth story. I’ll be coming back for the second issue. While this issue falls short in some regards when it comes to giving you enough to hold onto character-wise, I think it can be enjoyed for what it is so far. Mystery Girl is exciting, filled with energy, and has a lot to offer in its story hook.