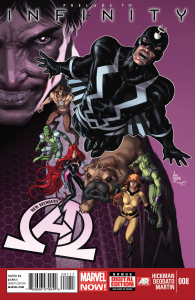 The race towards Infinity ends, but will strife within The Illuminati end the war before it begins? New Avengers #8 has the distinction of being the first book to actually reach the point where the Infinity event begins. The question presented in this issue is whether The Illuminati are going to be in a position to defend Earth from both the forces of Thanos and future incursions, or are they going to be too busy fighting each other to protect the planet?

A common complaint that many readers have had about the Hickman-penned Avengers titles is that they are too slow and that nothing ever really happens in them. I’m not here to argue against that point, but I am here to say that Jonathan Hickman plays the long game better than any writer in comics today. His work on Avengers and New Avengers continue this trend, as the pieces he has been weaving together for the better part of 2013 are coming together just in time for Infinity. Issue 8 picks up one week after the events of issue 7 where Queen Shuri of Wakanda declared war on Atlantis, despite the pleas of her brother. Here is where I will take the time to compliment the amazing recap pages found in every issue. I wish more books would take advantage of that extra page like Hickman does with his Avengers titles.

The recap feels much more like how a television show does it. It allows your mind to visualize what happened in the issue prior, and remember it more clearly as a result. Now back to the issue at hand, Tony Stark is back from deep space and reveals to Reed Richards that he was an Avenger left behind to watch over Earth as the rest of the team went off into space to face a “Potential pan-galactic threat.” This immediately gives us a frame of reference as to when the issue takes place. Unlike most of the series thus far, this issue is ahead of the most recent issue of Avengers, as most of the team has already headed out to space for their part of the Infinity story. Realizing this gives the events of the rest of the issue a little added weight, as we know that a good chunk of the Avengers aren’t going to be around to step in and save the day. The Stark/Richards scenes are also used to remind us that the threat of the incursions are still looming above all the other memorable moments in this issue.

Yes, there are a few big moments that happen throughout the issue and without getting too spoilery, I will say that they involve a meeting between a husband and wife that doesn’t end too well, a heartbreaking scene between two members of the Illuminati, and more than one invasion. If this sounds like a lot happens in the span of 22 pages that’s because a lot does happen and the hits just keep coming. The absolute best scene in the issue featured a huge turning point in the already rocky relationship between Black Panther and Namor. In one of the more emotional scenes of the series Hickman is able to convey so many emotions in so few words, as the world changes irrevocably for these two characters.

A lot of the credit here goes to artist Mike Deodato who has become one of the definitive Avengers artists over the course of the past decade. Whether it has been on the previous volumes of New Avengers with Bendis, or even Dark Avengers, Deodato always brings his A-game to whatever version of Earth’s Mightiest Heroes he may be working on. In this issue, his abilities are on full display as he is able to effectively convey grief, guilt, shock and anger all in the one scene with T’Challa and Namor. On top of this great scene, Hickman gives Deodato plenty of other memorable shots to draw — including the aforementioned two invasions, Necropolis, Wakanda, Atlantis, the Jean Grey School, some brand new villains, a few breathtaking pages on the Inhuman home of Attilan featuring a gorgeous rendition of Medusa, and a bloody final page that promises an all out war.

If you have been reading New Avengers from the beginning then this is the issue you’ve been waiting for. With the threat of war on multiple fronts and the looming threat of incursions, there are a lot of moving pieces on the board, but Hickman has put them in position to pay off handsomely. Get ready Avengers fans, because by the end of the issue Infinity is here. I can’t say I’ve been this excited for a Marvel event in long time, and if the main course is half as well done as the set-up found in the pages of this book (and Avengers), then we are in for a treat.