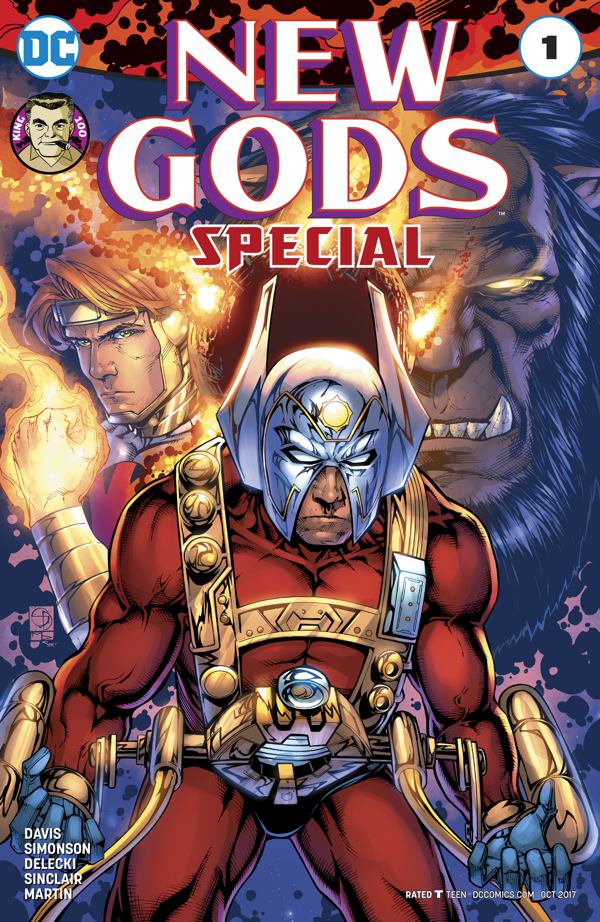 That’s how old Jack Kirby would have been at the end of August 2017. His creations, however, are timeless pillars of comic book legend. Among the most prominent in the DC Universe are the New Gods. Most (in)famous of those is Darkseid, with Darkseid’s sons Kalibak, Orion, and Mister Miracle closely following suit. Unfortunately for readers, two of the four of those do not appear on New Gods Special #1, which is written and drawn by Shane Davis, colored by Michelle Delecki, and lettered by Alex Sinclair.

Orion is the spotlight character of this adventure, as Davis’ story puts him in direct conflict with his half-brother, Kalibak. Their matchup and the story leading up to the epic brawl is hokey and over-the-top, like Kirby would have done. Unfortunately, Davis’ take on Kirby isn’t Kirby itself, but a very nice homage. He even takes the tribute a step further, fueling Kalbiak’s would-be-devastating weaponry with Kirba-Nex technology.

The story strikes me as something akin to what readers saw in the Super Powers comics from the 1980s – both the miniseries published by DC Comics and the minicomics packaged with each action figure. The end result is a tale that serves as a gateway to the New Gods (specifically Orion) in a story that is timeless and fun, but not very deep or memorable.

On the art side of this comic, Davis tracks more closely to the minicomics than to Kirby himself, but with the help of Michelle Delecki, New Gods Special #1 does achieve the standard quota of Kirby Krackle required for comics featuring the King’s creations. Combined, Davis, Delecki, and the lettering crew from A Larger World step beyond the minicomics, giving readers a gorgeous story that manages to be beautiful, even in its ugliest moments.

Rounding out this collection is a six-page original tale featuring Young Orion learning skills and strategy from Seagrin, written and drawn by Walter Simonson with colors from Laura Martin and John Workman that almost singlehandedly justifies the purchase of New Gods Special #1. But wait – there’s more! A pair of Kirby pinups and a matched set of Lonar tales from Kirby give readers that extra bang for their buck (or four).

Taken as an introduction to the broader worlds of Jack Kirby, New Gods Special #1 is a fun comic that properly celebrates one of the most creative minds to ever create comic books. It’s nice to get some Kirby on the shelves. I’m looking forward to the other specials DC is producing in this month of Jack Kirby’s Centennial. Long live King Kirby!