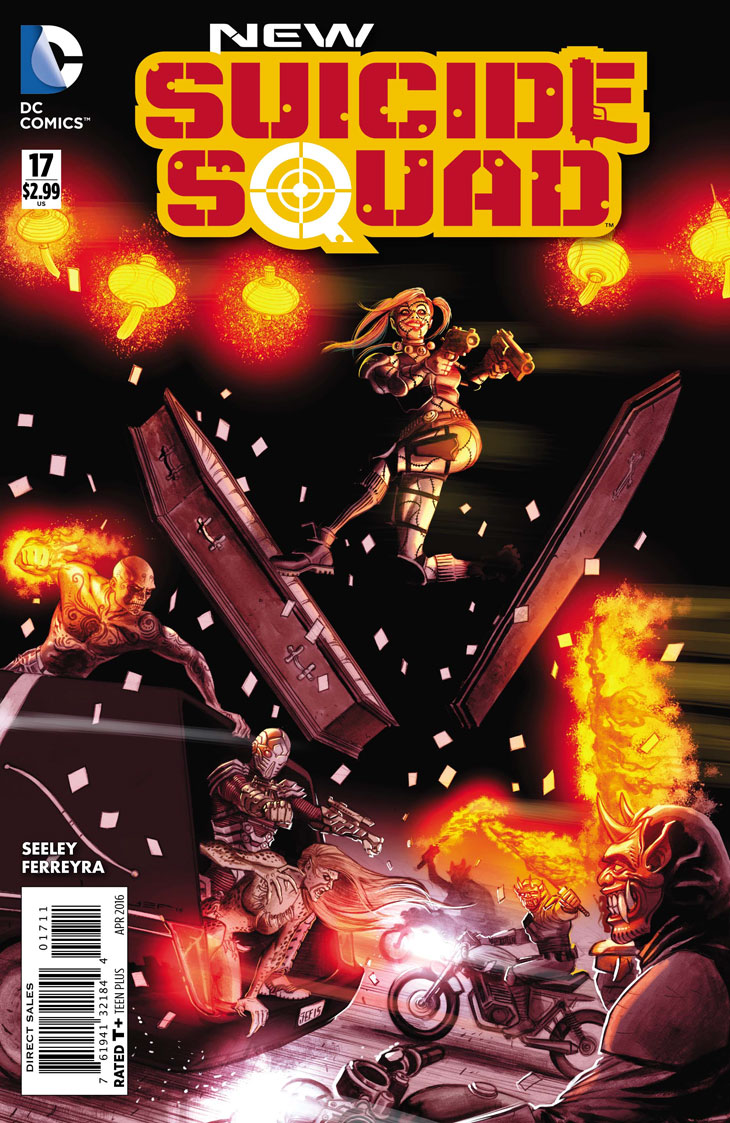 The Squad gets a reintroduction as a new mission looms: a Hong Kong politician needs protection from the US government and it’s up to Deadshot, Harley Quinn, El Diablo, and the Cheetah to stop any harm from coming to him. The only thing is, they didn’t anticipate facing an enemy with super-powers.

For fans eagerly awaiting the Suicide Squad feature film this August, I have news for you: this story might just tide you over. Functioning like a brand new walk-through of DC’s most terrible team, New Suicide Squad #17 could easily have been a #1, and most certainly is a great place to jump on board for a new mission.

Helmed by new writer Tim Seeley, this issue gives those who may have strayed away from the Squad in recent years a proper introduction. From the bowels of Belle Reve to far parts of the world, Seeley spends most of this first chapter on setting the stage, but does so with narration from Amanda Waller herself, giving both readers and characters in situ the lay of the land. Seeley’s Waller isn’t quite as rough around the edges as I expect Viola Davis to play in the coming months, and is, by necessity of current canon, not the least bit as formidable as the classic Wall. But she does exhibit a certain savvy that hangs in the air just a bit.

It plays well with the narrative as a whole that Waller here is a bit more of a politician than her original forebearer, because so much of what this story seems to be setting up is about a race for superpowers. It takes me back in a rush to the mid-eighties Cold War comics that spawned this villain-fueled version of the Squad in the first place, and rather than feel regressive, the contrasts strike me as inspired. America still throws its weight around like a boastful lion, probably much less carefully even, and that is going to bite the Squad in the ass before you know it.

The writer ticks off introductions to the personalities of the 5 key players, including nutty old Harley Quinn, capturing their essence well. In fact, by comparison to the recent Deadshot #1, Floyd Lawton’s dialogue feels perfectly crafted for his persona, keeping his words sharp and few, with a last line in the issue that expresses so much about who Deadshot is in his head. There’s a lot of lifting to be done in this issue to make it feel fresh, and Seeley connects with the ball for sure.

But there’s no question who brings everyone across home plate. Artist Juan Ferreyra creates a gorgeous experience with this issue, fresh off of his run on Gotham by Midnight, giving Squad fans something they’ve never quite had before. So much of the book’s history is blended with either dark and brooding line (appropriately) or somewhat standard super-hero fare. What Ferreyra has done is infuse a light inside all of these characters and environments that makes them come alive. It’s like a warm glow moving across the page — both literally with a color palette that is a delight for the senses and metaphorically with character renderings that breath new life into each and every villain in action.

The artist’s Cheetah is at once feral and regal, expressing a wit and abandon that resonates from her expressions. Harley Quinn is her usual hyperactive self, but the costuming she takes on for the Hong Kong festival captures a monster-esque quality that makes her feel like a killer Raggedy Ann come to life. The double-page spread of the team’s movements through the festival streets and across rooftops is so energetic and beautifully done. It’s not the only layout that makes me stop to take it all in, but it’s definitely the most compelling.

And when the antagonist arrives, Ferreyra makes sure he (or she?) feels foreboding without having to take the book to a dark place. It’s so strange by comparison to recent pages featuring the Spectre, but speaks to the artist’s range and ability to find the beauty in anything banal, horrific, or in between. His mastery of light and shadow, color progression, and movement all make for a book that is sure to impress.

An excellent jumping on point for what I hope is not just a fill-in story, New Suicide Squad #17 is the book you can hand off to anyone excited by the recent trailer, or fans who just want to experience something exceptional in comic book art. Ferreyra and Seeley are surely at the start of something fun and beautiful here.