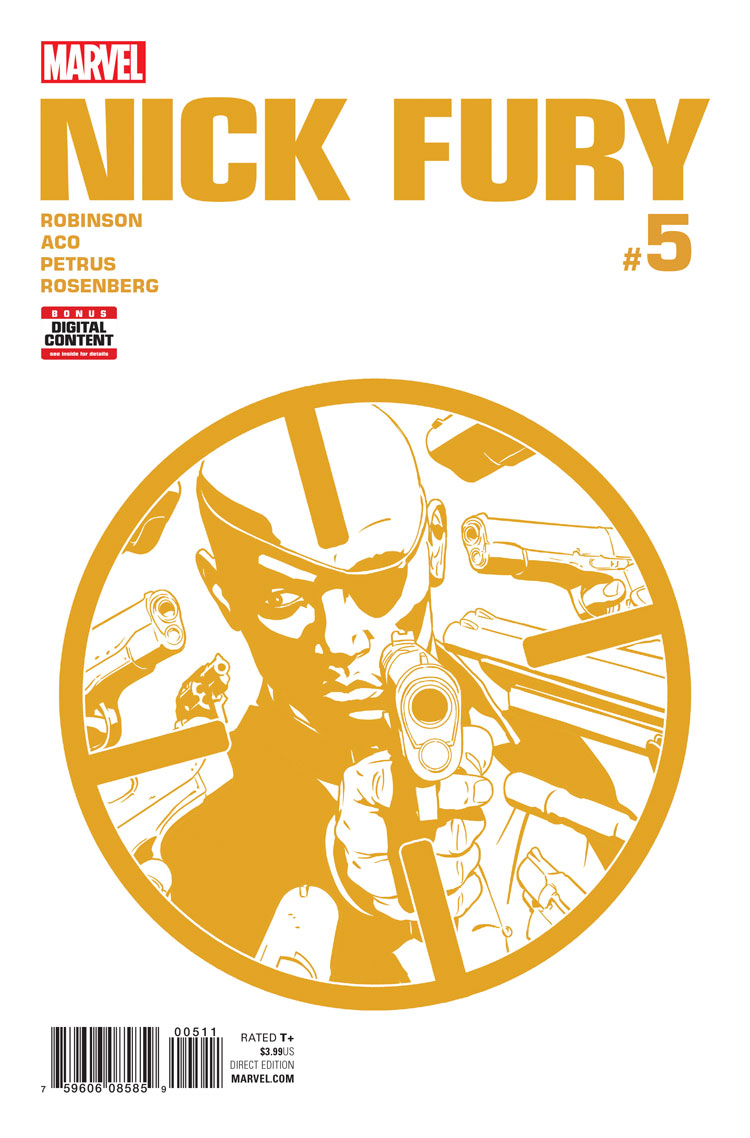 Nick Fury needs a vacation…but maybe not this one.

S.H.I.E.L.D. gives Nick Fury some well deserved R&R in this issue, in the form of being sent to a town where every single resident is a skilled assassin. His task is simple: kill them all. Who hasn’t had this sort of vacation?

As has been the case with each issue of Nick Fury thus far, the plot of the individual mission is somewhat straightforward. The magic of Nick Fury has been how the missions play out, and how Robinson, ACO, Petrus and Rosenberg go nuts letting the action unfold. This is one of the greatest sets of spy stories that has ever been told, 20-ish pages at a time. It’s like a dose of a psychedelic Bond film every month, and I will say this is the first series I’ve read where I’ve felt like Nick Fury Jr. is actually becoming a character in his own right.

Robinson’s dialogue is solid, with Fury dishing just the right of attitude out to his handler. Their banter is the perfect frame for the insanity that ACO, Petrus and Rosenberg crank out, and by god do they ever craft some insane art in this comic.

If you’ve ever read an ACO comic, you know what you’re getting here. ACO, Petrus and Rosenberg are a dream team and there is no better looking comic on shelves this week…and maybe even this month. You know those jaw dropping double page spreads from earlier issues? THIS ONE HAS A FOUR PAGE SPREAD. ACO, Petrus and Rosenberg unleash the fury of an action packed four page spread on your eyes and they will never be the same again. This issue is as frantic as the church scene in Kingsman without as much over the top gore, and this art team lets it unfold brilliantly. If this crew isn’t up for Eisners next year, the system is broken.

Nick Fury #5 is an entertaining read that will blow your mind with visuals that are unlike anything else in comics right now. This team has crafted something special here and you’d be smart to hop on the Nick Fury train and join him for his vacation.