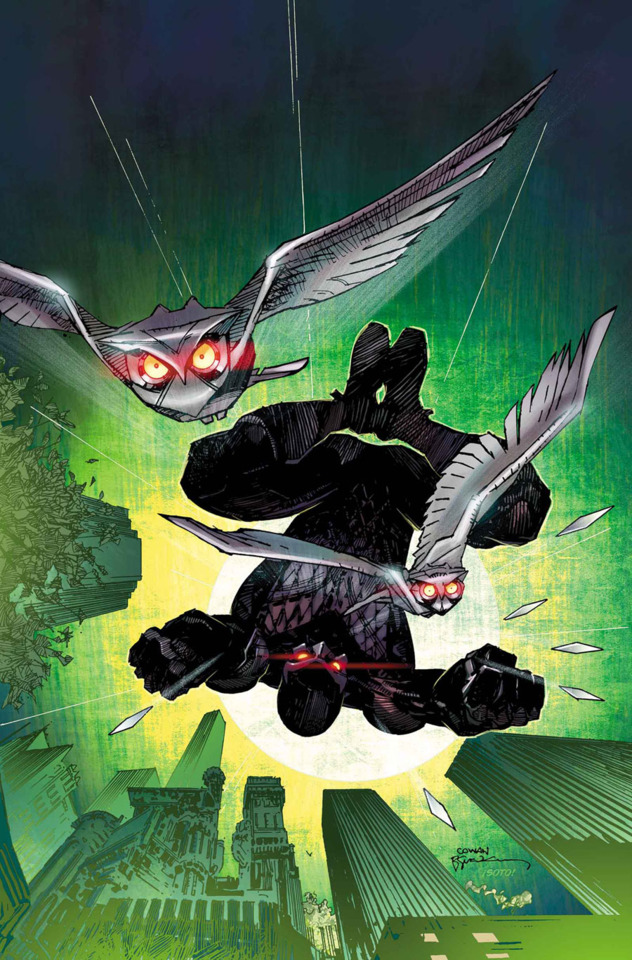 Sometimes you’re a target no matter what you do.

In the midst of Chicago’s racial tension, white supremacists gain significant support and Raymond does what he does best: busts heads and takes names. After saving a group of young men from being the target of violent racism, he finds himself in a trap by the invisible antagonist plaguing him, the police, and Chicago itself.

This issue seems to cover the shortest span of time since the initial issue, making it a truly immersive experience. There are so many themes at play that processing them all at once is overwhelming. Such a story is invaluable in terms of narrative, art, and comics, as the different layers of the story provide a compelling case for inclusion of visceral racial and diverse narratives. Raymond seems to be the most conflicted in this issue compared to others, and such a trial manifests in grueling ways that intensify his own motivations and the circumstances of the world around him.

David Walker seems to be the most real in Nighthawk #4, creating a truly shocking story that is all parts important and jarring. The story overall is well constructed and Walker makes sure there are no stones unturned. The ending is spectacular and uses the idea of a villain’s trap in a way that doesn’t feel contrived.

The most significant scene to me is Raymond’s interaction with looters, in which he tells them not to be “targets.” This moments subtly addresses ideas like respectability politics while also looking at the reality of black people in such situations. Both Raymond and the black men he saves have valid points, hearkening to the reality of survival sometimes being an ugly game but also that a racist America looks to these types of situations to further vilify black people and other people of color.

Ramon Villalobos’ work is at its best in this issue. Bodily movement and action help to convey the trying events of the Nighthawk story, and Villalobos draws each character with unique styles of activity. Adding to Walker’s dialog between Raymond and the young black men, Villalobos adds tiny details that complicate the idea of rioting in times of great pain and tension.

Anyone seen looting in the issue isn’t carrying electronics or valuables, as the media showed during times of unrest in Baltimore and Ferguson. They’re carrying food, like orange juice, and unidentifiable boxes. Sure, you can assume they’re doing this for personal gain, but Villalobos creates a situation where it seems as though they’re getting the things they needed that maybe they couldn’t. Hell, one person is carrying a box that says ‘Bran—‘ with the rest of the word cut off, giving me the impression that they just wanted cereal. These types of artistic details add important nuance to stories like Nighthawk’s.

I almost felt as though I was in a volatile Chicago because of Tamra Bonvillain’s colors. With a knack for evocative and deliberate color schemes, Bonvillain casts a dark and aggressive tone across each of the scenes. I love her talent for emotional layouts, and this issue is surely no exception. With such an powerful story, Bonvillain’s talents are put to excellent use, reminding you that art really can imitate life and that careful use of hue and tone will evoke the very nature of the story within readers.

Whew. If you know me, you know that I’m serious about representation and find it vital for any narrative. Sometimes, we need a hard hitting story that catches you by the heart and gut, casting you into the throes of fury and sadness. What a truly remarkable team we have on Nighthawk, and all of their talents are on full display in this issue. If you want a comic and a story that challenges you to look at the world around you and see it for what it is and the pain that people endure, this is it. Digest at your own pace, and if it gets too real, that’s okay.

Nighthawk is the series we’ve needed for a long time, especially since the death of Mike Brown, and I truly feel it is a valuable template for addressing issues in comics that many other marginalized people face.