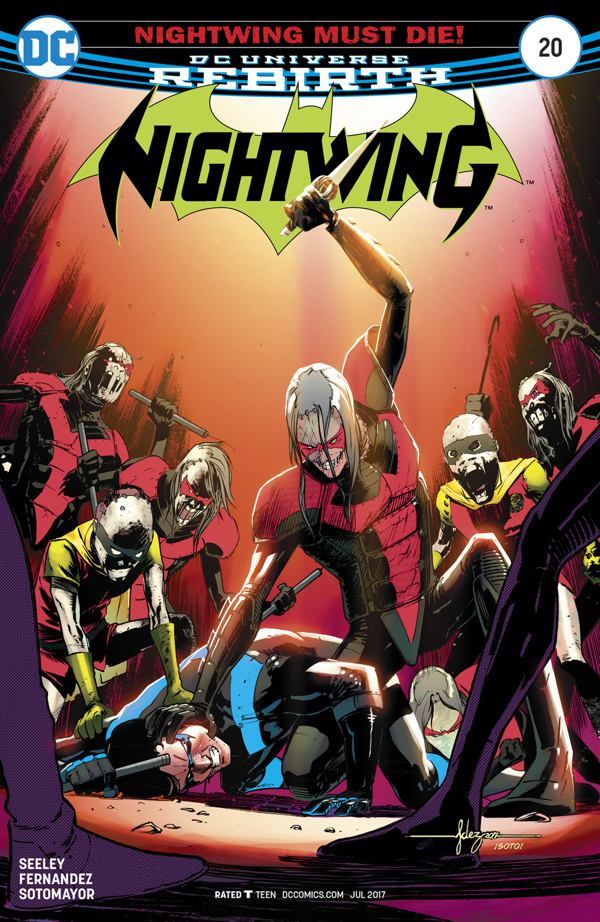 Dick Grayson’s relationship with Damian Wayne is at the center of this issue, which wraps up the Dr. Hurt storyline.

I really enjoyed the focus on Dick and Damian’s relationship, and that what ultimately broke Dick out of the trance was his memory of the wisdom he passed on to Damian. And punching Dr. Hurt while reminding him that he’s not defined by tragedy was a really nice touch.

While the trance was a bit confusing and jarring at first, it quickly became clear that it was all happening in Dick’s head. The integration of Dick’s dialogue in the trance and his dialogue in real life really helped transition between the two scenes, and made it easier to understand the emotional impact the hallucination was having on Dick. I also really loved that by repeating what Dick said when he passed the Robin mantle on to Damian, he’s able to break out of the trance, highlighting how much that moment meant to him.

The brief moment Dick and Damian share right before the Deathwing and Dr. Hurt confrontation is incredibly emotional. Dick is very clearly worried for his safety, and Damian reminds him that he can take care of himself. Damian’s nonchalance at being able to quickly move his liver out of the way of a knife is a nice moment of levity in the middle of this emotional issue.

The final conversation between Dick and Damian is also really well done. Damian actually admits he was wrong to confront Dick the way that he did, and the two actually have a conversation about their roles in each other’s lives. Seeley really nails the dynamic between the two, both how well they work together in costume, and the paternal responsibility Dick feels for Damian.

I really love the page layouts during the trance scenes. The panels are visually distinct from the rectangular, boxed panels in the present with rounded edges. As Dick is starting to come out of the trance and the story bounces between reality and the vision, the differences between the pages help the reader to identify immediately where the scene is taking place.

Fernandez does incredible work with the faces of the characters. In the pages where Shawn and Deathwing are talking, the emotion on Deathwing’s face is very easy to read, and really adds to the emotional journey he’s gone through during this arc. I also really like the pencils during the end conversation between Dick and Damian, close ups on their faces, both head on and in profile. The focuses of those panels is entirely on those two characters and really adds to the emotional moment they’re sharing.

Sotomayor’s colors during the hallucination and in reality are also visually distinct. In the trance, the colors are muted and dull, with the red and blue on the costumes the only splash of color. The contrast between light and shadow is used very well, with blacks and yellows in the background, allowing the two characters to really stand out. In reality, the scene is taking place at night, and the shadows play across Dick’s face in such a way as to highlight the emotions on his face, lit up only by the blue on his mask and suit.

Overall, I really enjoyed the issue. I liked the focus on Dick and Damian, as well as their conversation where they address what they mean to each other. Shawn is given a spotlight too, and her conversation with Deathwing highlighted how much her character has progressed. The issue was a satisfying conclusion to the Dr. Hurt arc, and the emphasis on Dick and Damian’s relationship was extremely well done.