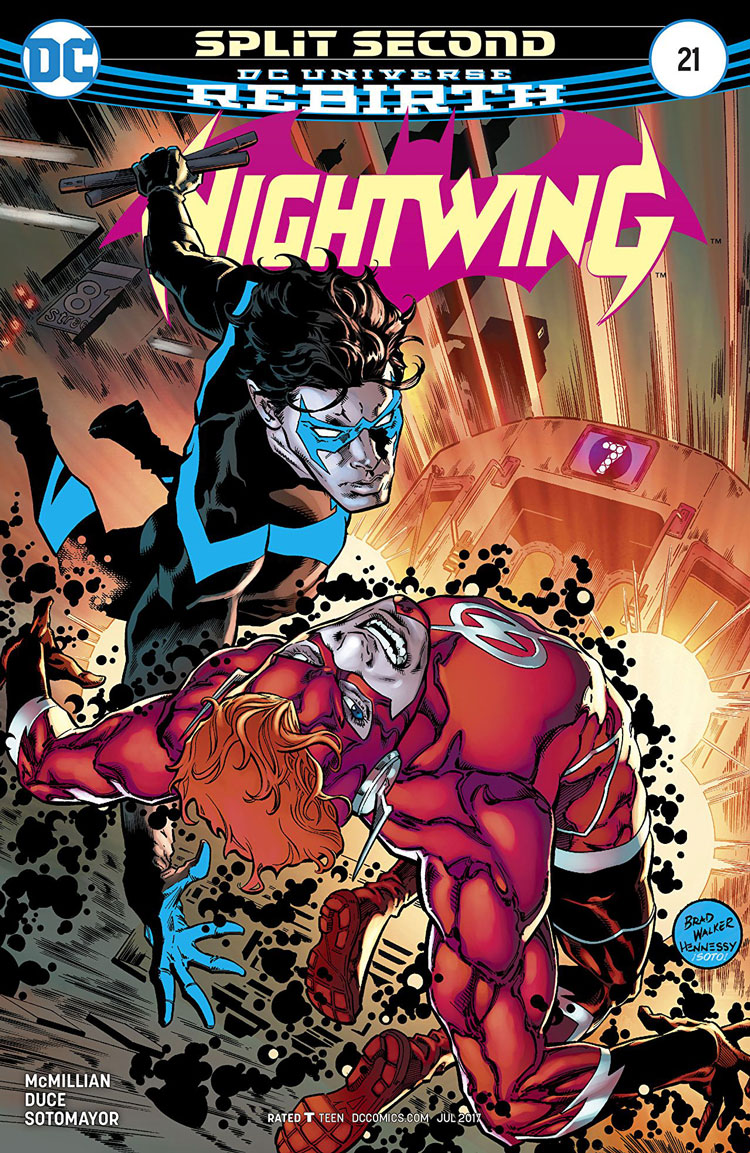 Dick Grayson and Wally West team up for a guys’ night out, only to have it turn into a Nightwing/Flash team up when a new villain called Time Bomb strikes.

Following the events of “Nightwing Must Die” (in which, spoiler warning, Nightwing did not die), we get a breather issue before the next arc begins. The creative team of McMillian, Duce, and Sotomayor take the opportunity to bring in Wally West for a guest appearance. This, by the way, is the Wally West that came back in the Rebirth special and presently appears in Titans, not the one who first appeared during the New 52 and presently appears in Teen Titans.

I’ve really been enjoying these pillow issues that DC’s been doing between arcs, and this one is no exception. One of the things that’s been missing in mainstream superhero comics recently has been pauses to tell smaller stories that give the reader little insights into the characters and how everyone relates to one another. Since this version of Wally has been totally absent for the past few years, the decision to take a moment to re-establish the relationship between Dick and Wally is a welcome one.

The creative team makes good use of their pages, telling a story with a punchy opening, nice banter and character moments, and a new mystery villain who is both introduced and thwarted in the space of 20 pages, with room for a single page lead-in to the next arc at the end. Some of the dialogue feels a bit overwritten and the voices are slightly off, compared to prior issues.

Where it shines, though, is in the relationship between Dick and Wally. We see their different approaches to their personal lives and to crime-fighting, but also how they work with and support one another, both, in turn, willing to race speeding bullets and locomotives to save one another. It’s just great to see this friendship again, one that’s been missing from comics for years now.

The action is well-scripted and clear, something that could have been a problem given the villain. Nightwing and The Flash are facing a rookie villain called Time Bomb, who’s able to stop time temporarily in a physically limited area. We first encounter the power within the area of effect, with a crowd suddenly noticing their valuables are missing.

Then we see it again, this time from outside, with Nightwing and Flash observing as Time Bomb robs frozen civilians. This does a nice job clearly and concisely setting up the rules of the villain’s power, which allows for a well-executed fight scene in which Flash finds himself overmatched by the time-stopper.

The art complements the action perfectly. In particular, the scene of Time Bomb robbing the time-stopped crowd makes good use of offset panels within a larger crowd scene to concisely show the villain moving through a frozen crowd. It’s a subtly brilliant display of both time and non-time with an economy only possible in the comics medium.

Sotomayor’s color work, meanwhile, remains as impressive as it is throughout the rest of his run on Nightwing, mixing brightly-colored characters with more dull, green-tinged backgrounds to make them stand out against their environment.

Nightwing #21 is a great one-off story that is both a satisfying read by itself and does a great job re-establishing a forgotten friendship.