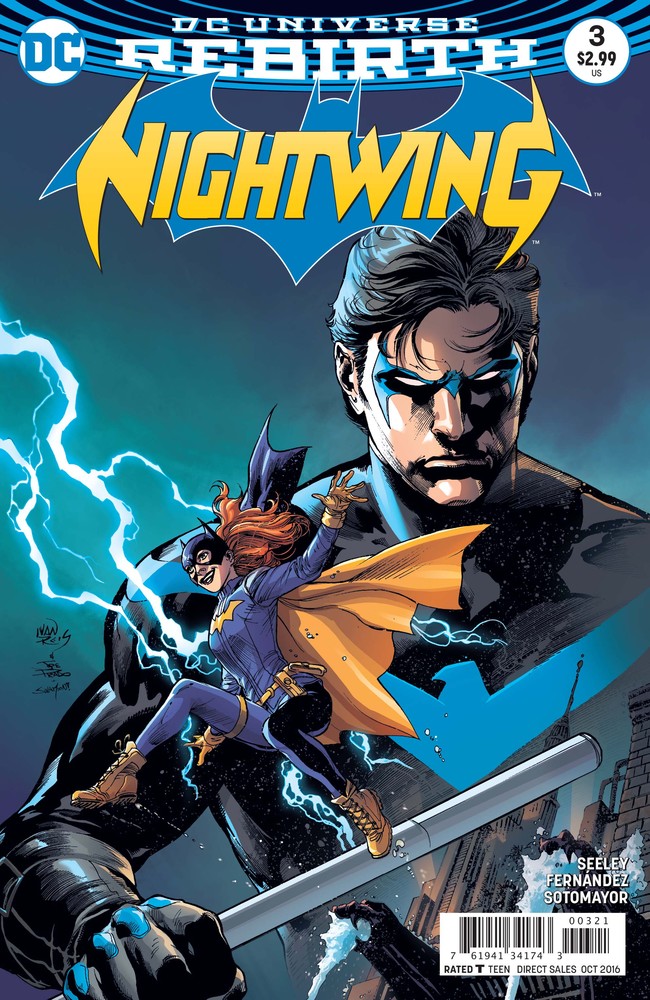 The third installment of “Better Than Batman” brings Batgirl into Nightwing #3 as writer Tim Seeley and artist Javier Fernández continue to regale us with the adventures of Nightwing. Reluctantly paired with Raptor (self-proclaimed “international man of mystery and stealing stuff”), Nightwing is working for the Parliament of Owls, but as the readers know, Nightwing is actually burying himself deep undercover.

With Batgirl to serve witness, readers learn that maybe, just maybe, Nightwing might be too far out to come back. Seeley doesn’t tell readers what to think one way or the other. He doesn’t even necessarily draw sides for the readers; instead he just presents the situation from certain points of view. Among the points of view are before and after, not to mention Nightwing, Batgirl, and Raptor. The story itself is fairly straightforward, but the ramifications of his actions are going to sting Nightwing one way or another.

In Nightwing #3, Seeley writes natural banter to the relationship between Dick and Babs, both as more-than-friends and as teammates in battle. There are years that set up the dynamic between the two, but no need to spend time elaborating on that in the pages of this comic. Instead, Seeley starts spinning the story around, giving readers the longest, most sustained look at it from Nightwing’s point of view, but providing us with input along the way.

There’s a little bit of mystery (proving Dick isn’t quite the detective Bruce is), action (no sharks in this issue, but plenty of punches thrown), suspense (booby traps), and continuity (Doctor Leviticus makes another appearance) present in Nightwing #3. All of it adds to rich landscape Seeley is building for and around Nightwing.

On the art side of things, colorist Chris Sotomayor provides stark contrasts to the deep, scratchy shadows from Javier Fernández. The bright orange of Raptor’s mask and symbol, the almost-iridescent blue of Nightwing’s costume accents, the rich auburn hue of Batgirl’s hair and the chilly blue tones used throughout he backgrounds in Norway describe the setting and the temperature. Sotomayor’s choices maximize the visual impact of and around Fernández’s drawings, emphasizing the intelligent choice editors Dave Wielgosz, Rebecca Taylor, and Mark Doyle made by assembling this crew.

Letterer Carlos M. Mangual contributes to that assessment nicely. The art is clean and sharp, but the verbiage of the tale appoints the flow nicely, punctuating in places and getting out of the way at other points. Seeley keeps the story lean, directing Mangual to hash out bits of exposition in captions, which emphasizes the impact of dialog used throughout Nightwing #3.

Meanwhile, in his third installment in this title, Javier Fernández is making a case to be known as THE Nightwing artist. Having drawn all of his appearances, Raptor completely belongs to Fernández. Nightwing is becoming his, as he sculpts the look of Dick Grayson’s post-Rebirth costumed identity, but one image – ONE! – of Batgirl is all readers will need to want to see more from Javier Fernández. Like a lot more. Like, “Please, DC, have him draw all of the Bat-books!”

In previous reviews, I’ve pointed out that certain character and creator combinations are just meant to happen. That certainly appears to be the case with Fernández and the post-Rebirth Nightwing. A little grittier than he has been before, but wrestling with who he is and why, Dick Grayson has some edginess about him, but is still the loveable character so many comic book fans point to as a favorite. All of that is evident in Fernández’s art, and so much more.

Javier Fernández isn’t the only solid match for Nightwing, however, as Tim Seeley is giving readers everything a Nightwing comic should be: action, adventure, intrigue, soap opera, and suspense. Seeley gets Nightwing, and, even better, is able to communicate who Nightwing is to the readers. He doesn’t belabor the description, preferring to show rather than lecture, but he does so in a manner that engages the reader, almost as if he is inviting the reader ever closer with each panel. Nightwing #3 is yet another solid offering from a snazzy, well-matched creative team. I cannot wait for the next installment of “Better Than Batman,” and I have a feeling I’m not alone.