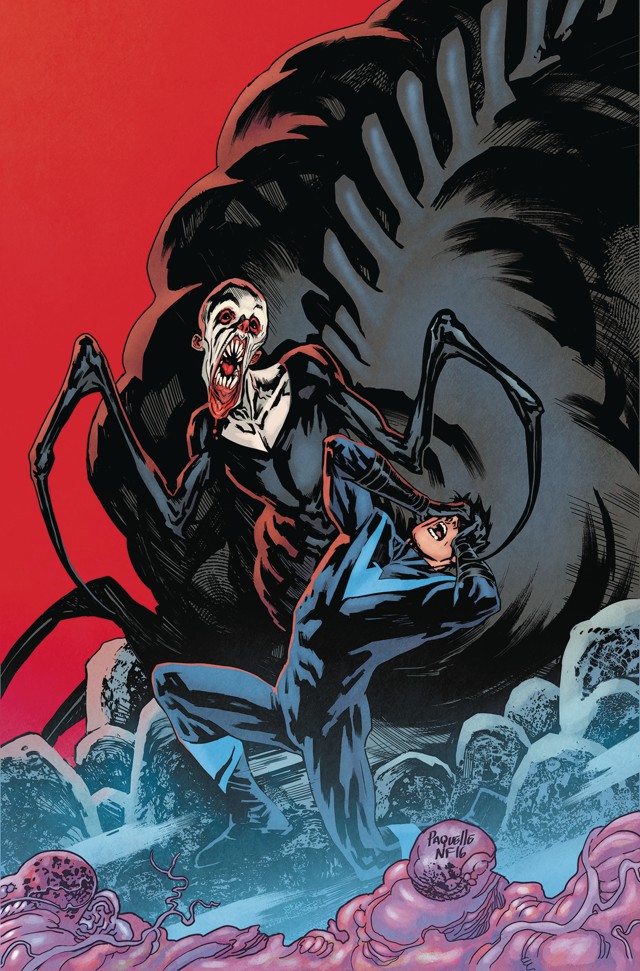 After the globetrotting, Owl-foiling, Raptor-introducing opener for the Nightwing series, the fifth issue plays along with the rest of the Batman corner of the DC Universe for a Bat-centric crossover. Part two of “Night of the Monster Men” crashes through the Gotham Factory District, as regular Nightwing writer Tim Seeley co-plots the issue, but hands the scripting duties over to his co-plotter, Steve Orlando.

Orlando does a decent job handling the half-dozen-plus characters swinging, diving, shouting, and flying (yes, flying) through this issue, giving most of them a chance to shine, but at times the dialog stutters a bit, looking for stability, and not quite finding it. That might be a side effect of the number of characters in this issue or the velocity with which Night of the Monster Men storms through Nightwing #5. The story moves, Batman barks out orders, and a bunch of Batman’s crew aren’t happy about it. Some, like Nightwing, are even insubordinate. It keeps the story moving and puts the pieces across the Gotham City chessboard as needed, but it lacks depth, which is unfortunate following the solid story that preceded “Night of the Monster Men” in this series.

It’s not horrible. It’s serviceable, and the fact that a crisis like this has exploded in the middle of everything else going on for the Bat-Family is believable and horrific, as you might expect when giant monsters invade the city.

Like the story, the art serves its purpose. At times it wobbles a bit, like the red liquid that is all over the evacuees in the cave, or the “SPLORT” sound effect being the major indicator of the monster evolving, but it does more to guide the story than stall it.

Roge Antonio’s style itself is an interesting homage blend of Graham Nolan, Yanick Paquette, Patrick Gleason, Kevin Nowlan, and Norm Breyfogle, depending on the scene or the character present. Roughly halfway through Nightwing #5 the inking changes, with heavier lines and darker shadows. Antonio keeps the figures clean and the storytelling clear. Colorist Chris Sotomayor brings a daring, vibrant palette, and letterer Carlos M. Mangual appoints the dialog to maximum effect for maintaining the integrity of Antonio’s artwork. The shifts in art style border on distraction, but don’t defeat forward progress.

Nightwing #5 presents a decent midway point for the “Night of the Monster Men” story, but not an exceptionally memorable Nightwing tale. Grayson is barely in half of this issue, which is fine for a crossover, and he can still, arguably, be deemed the lead of this chapter, but there is nothing here that will have readers reminiscing about “That time Nightwing fought the Monster Men.” In short, this issue is a nice reminder of Nightwing’s membership in the Bat-Family, but an ancillary tale for Nightwing readers.