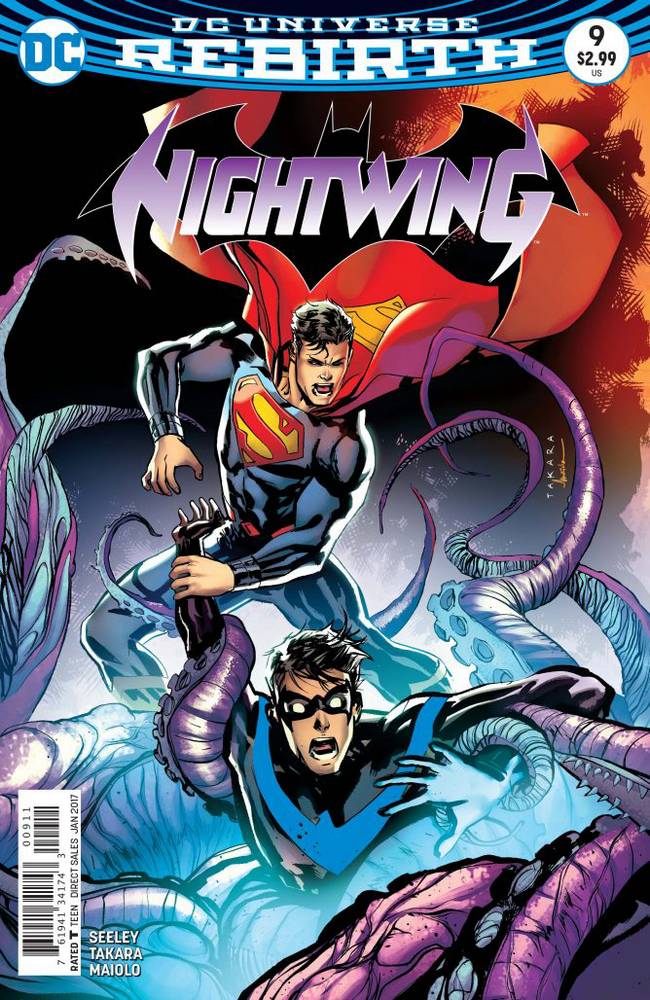 Nightwing #9 offers a done-in-one read for fans of Batman’s first protege. “Fighting Destiny” serves as a nice transition between “Rise of Raptor” and whatever is on deck for Dick Grayson’s life. It also encapsulates Nightwing’s place in the DC Universe quite nicely, with appearances from Superman (or SuperMEN), the Titans, the Justice League, and, of course, Batman and his extended “family.”

Writer Tim Seeley uses the issue to unpack the baggage Nightwing has assumed since the launch of his Rebirth-powered title while also giving Dick Grayson a chance to process what he’s done and seen, essentially allowing the one-time Boy Wonder to get over it without being dismissive. Seeley’s story, and the inclusion of Superman also give Grayson a chance to check himself against his day-to-day and figure out that a change of surroundings might be best.

Seeley brings in Superman as a nice foil for Nightwing, giving the heroes a chance to team-up and, more importantly, interact on a personal level, as this Superman isn’t the Superman Nightwing knew, nor is Nightwing the same Dick Grayson this Superman is familiar with. That adds a wrinkle to the tale, but it opens the story for Seeley to broadcast the relationship and mutual respect these two men share, regardless of their multiversal home. Adding in Doctor Destiny is a masterful stroke, as both characters are familiar with the villain, but not as a primary foe. Seeley even manages to stitch that together with the ongoing adversaries in Nightwing to transform this done-in-one, transitional tale into a pivotal piece in the Nightwing series.

Takara is a smart, natural choice for Nightwing, as he brings similar storytelling sensibilities and pacing as Javier Fernández while affording Fernández a break to gear up for a trip to Blüdhaven. My only issue with Takara’s art is that when Red Robin (Tim Drake) appears, he’s a bit bulkier and taller than I’m accustomed to, looking more like Nightwing in a different costume than a truly different individual, but the setting helps rationalize that. Otherwise, Takara’s smooth lines, dynamic figures, keen expressions, and varied camera angles keep the visuals of Nightwing #9 sharp and fun.

Colorist Marcelo Maiolo keeps the story looking crisp, with solid, saturated (but not overly so) colors. Known for his stark, flat backgrounds and single-color panels at dynamic story beats, Maiolo uses a couple here, to great impact, as Nightwing fights a different kind of battle. Coupled with letterer Carlos M. Mangual, Maiolo finishes the visuals quite nicely, giving Nightwing #9 a distinct, but comfortably different appearance from the series to date. This trio is a nice combo, and I do hope they return for future issues to spell Fernández as needed.

Nightwing continues to be one of the true joys of the post-Rebirth DC Universe. Dick Grayson has always been the most approachable personality of the DC Universe, and the most flexible to construct relationships around, but this issue emphasizes how far his influence spreads, reaching beyond Gotham, even beyond the universe. This issue is easily approachable, but it might raise some questions for continuity-sensitive readers. If you’re looking for a place to jump in and join the adventures of Dick Grayson (already in progress) then Seeley, Takara, Maiolo, and Mangual are right here to welcome you.