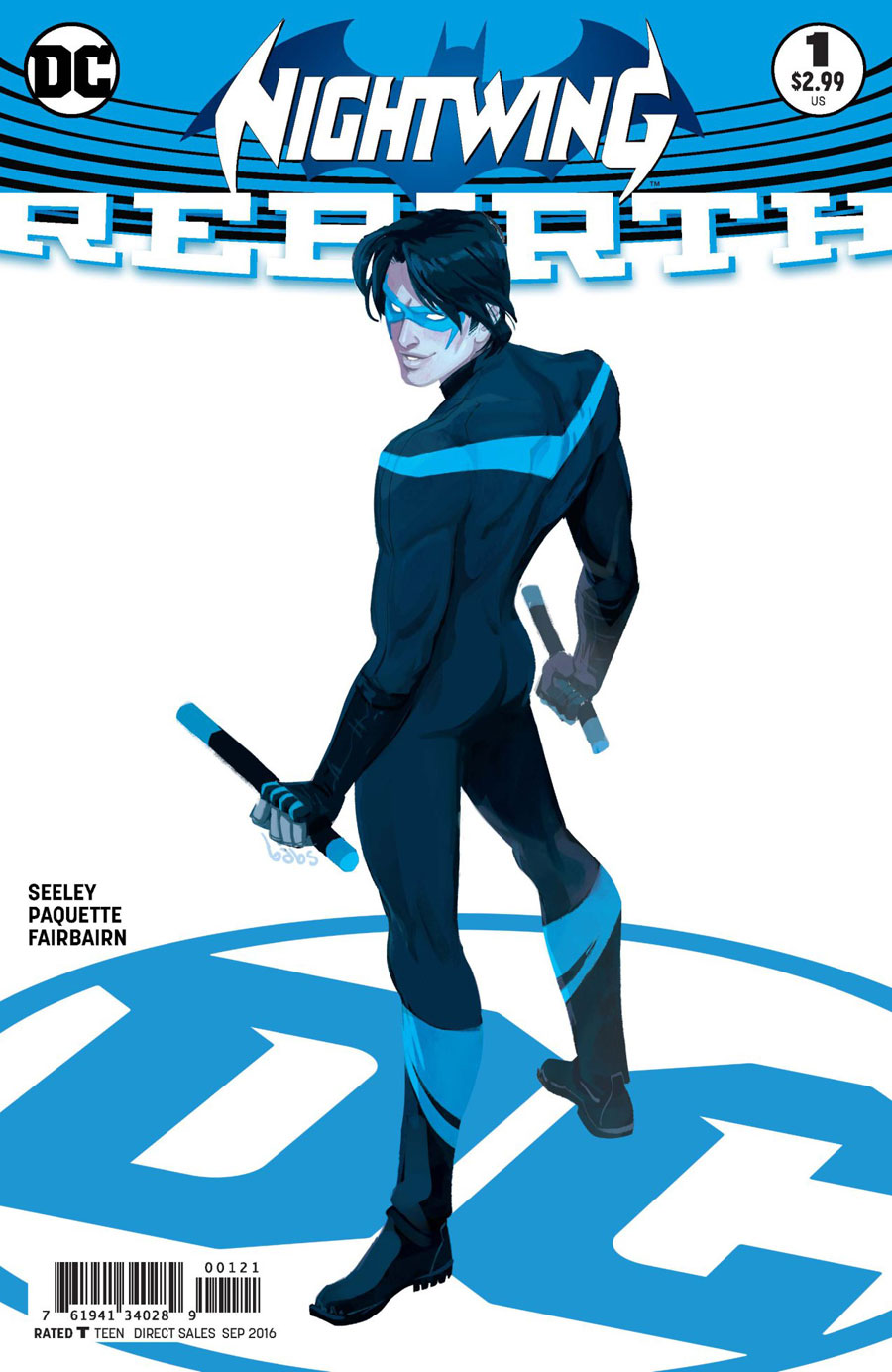 Writer Tim Seeley goes back to basics with Dick Grayson, peeling back years of stories to reveal one very important thing to readers: the origin of Nightwing.

Not the origin of Dick Grayson’s crimefighting identity set to return in this post-Rebirth DC Universe, but the source – the inspiration — for the name. I won’t spoil it here, but like everything else in Nightwing: Rebirth #1, the nom de guerre illustrates just how integral Dick Grayson is to the DC Universe as a whole.

With gorgeously crafted art from Yanick Paquette, Seeley sprints through the DC Universe, pitting Dick Grayson against the Madmen (now very hipster-by-way-of-steroids), having him converse with Damian Wayne, and even checking in with the Tiger King of Kandahar and Spyral and Midnighter. Batman makes an appearance and the Parliament of Owls steps up, menacingly spreading their wings, hinting at a significant role in the future. All of this happens in the span of twenty stunning pages.

Nightwing isn’t simply a character emerging from under Batman’s shadow. He’s not just a circus orphan. He’s not just a grown-up Teen Titan. He’s respected by Batman and his sphere of influence stretches to the Titans, Superman, Spyral, the Birds of Prey, the Court and Parliament of Owls, and farther. In short, Seeley presents Nightwing as a Kevin Bacon-type figure in the DC Universe, connecting seemingly unconnectable corners and inspiring threat and ally alike.

Dick Grayson embraces every aspect of his history in Nightwing: Rebirth #1, but Seeley keeps it from being a navel-gazing retrospective. This is clearly the first step of a marathon that has a goal of even further ingratiating Nightwing into the DC Universe. Seeley stops short of giving Nightwing a base of operations and supporting cast beyond the entire DC Universe, but he does establish a mission for Nightwing that promises intrigue and adventure.

Assigning Paquette to Nightwing is a match made, one of those oh-so-rare occurrences that perfectly match the creator and character. Paquette’s art is crisp, clean, and wide open, undoubtedly a dream for Nathan Fairbairn to color. When the story calls for shadow (in other words, when Batman enters the panels), Paquette pours in the spotted black, etching it out from pure shadow to delineate form, texture, and shape.

The artist commits a mind-numbing quantity of detail to the page, giving every panel ample background and every character distinct features. I’m not sure if Paquette is in the planned artist rotation for this book beyond the special, but he certainly should be. Combined with the lush, descriptive colors from Fairbairn, and the smooth, smart, polished placement from letterer Carlos Mangual, Nightwing: Rebirth #1 is a stunning visual masterpiece.

As the good Rebirth specials do, Nightwing: Rebirth #1 bridges the space between the New 52 and the future, sprinkling in history and rediscovering the core of the character while infusing the character with a healthy dose of fun. In this case, however, Seeley, Paquette, Fairbairn, and Mangual each bring their very best to the issue and give readers a comic that is timely and timeless. Wally West has returned to bring hope back to the DC Universe, but Nightwing returning brings back daring-do, adventure, and leadership earned through example.

This creative team gave me everything I didn’t know I expected from Nightwing: Rebirth #1 and so much more. I can’t wait to continue the adventure.