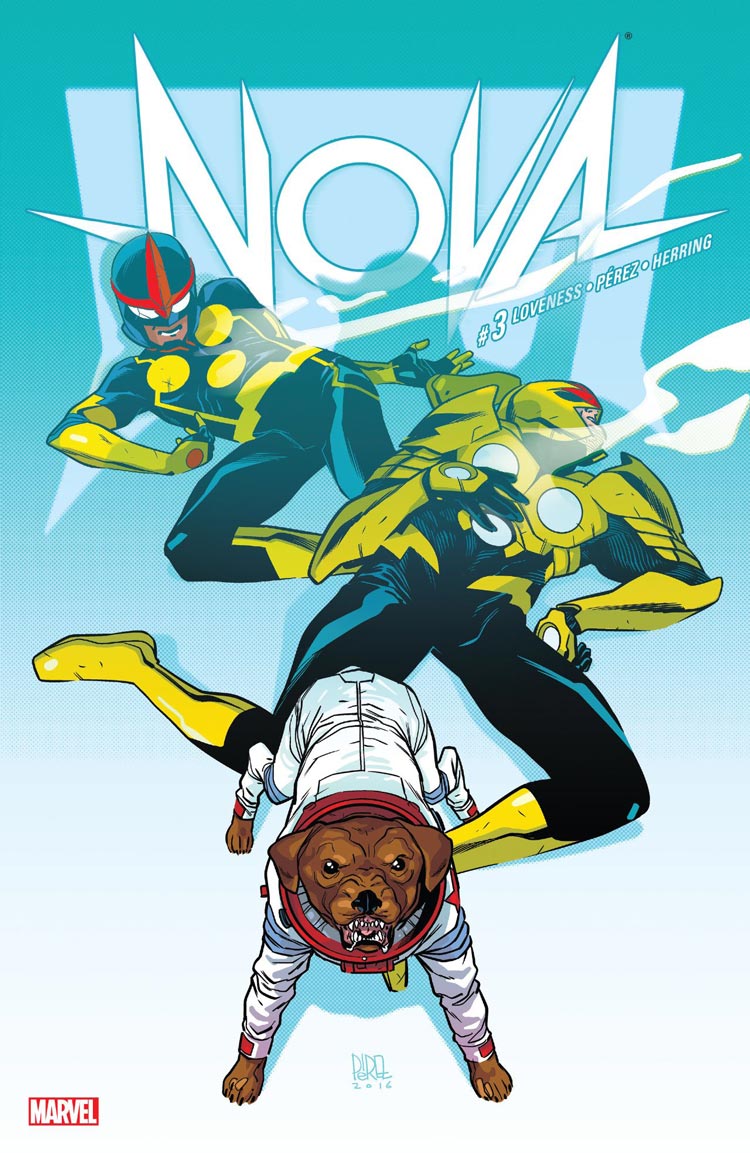 Sam and Rich team up once more to defend their helmets from vicious bounty hunters in this issue of Nova!

Loveness and Pérez have written an extremely entertaining comic. I’m excited to see where the story arc goes. Rich’s plot is especially intriguing, since it becomes incredibly obvious within this issue that something is wrong with him. I feel, though, that what really holds the series up is its characters. I love how uniquely awkward both Sam and Rich are. The moments of weakness and uncertainty they each have at different times creates a more captivating tale.

Pérez’s art is stunning. It feels like classic aesthetic with modern characters, especially when more popart-y panels pop up. It’s this great blend of old and new that carries the theme of this comic well. The art for a few of Rich’s particularly unusual abilities are especially engaging, the body horror choices made really surprised me. I’m looking forward to seeing more of what Rich can do.

Herring’s coloring compliments Pérez’s art, adding more to the old and new blend of the comic. His coloring for letterer Albert Deschesne’s speech bubbles are a nice touch as well.

A scene that I keep thinking back to is one towards the end of the comic. In a bar destroyed and emptied of customers, the two Novas enjoy drinks together.

“So. You gonna ask that girl out or what?”

Rich starts this conversation, as if to be normal. To have a bonding moment with Sam. Sam stumbles through responses as Rich keeps poking at the subject, until finally, he says something truly worth noting.

“Look, kid. I’m not a life expert. I’m not a cool, genius Tony Stark guy. But I have been dead. And looking back…I wish I had talked to more girls.”

It’s this incredibly human scene. This mentor-to-mentee-esque chat that feels so normal. It’s offputting to see, in a way, after a particular reveal that happened earlier on. And because of that, it’s mesmerizing. It’s a bittersweet scene that would warm your heart if there wasn’t an underlining darkness within the comic. It makes me wonder how painful it will be once the inevitably horrible thing will happen happens, whatever it may be.

You should definitely read Nova. It’s not too far into the series yet, the main characters are relatable, and something terrible is bound to happen soon enough. And who doesn’t like that kind of tragic drama?