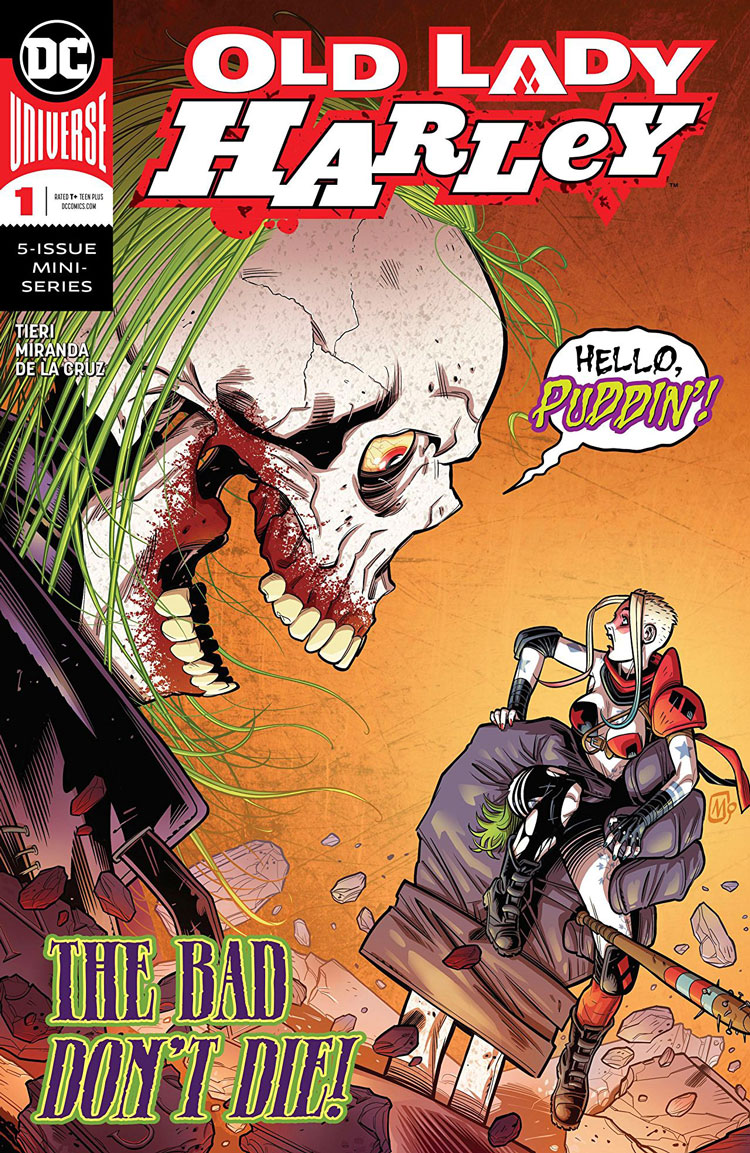 Old Lady Harley is a five issue mini-series staring 2016’s favorite pop-culture darling that adds nothing to her character. The story follows an aged Harley Quinn in a retread of every post-apocalyptic story that’s ever happened – a vague doomsday event happened, humanity’s spirit broke, monstrosities and bloodshed are a plenty, and the protagonist is jaded, bitter, and old.

But what has always made these stories must-read affairs has been the character commentary that the apocalypse trope conjures.

The Dark Knight Returns redefined Batman in 1986. Old Man Logan has informed every Wolverine story since 2008. Hell, even Spider-Man: Reign can give you some pointers on the wall-crawler. Old Lady Harley does no such thing.

Old Lady Harley is more concerned with quips and forced references than character introspection. Harley is joined by a known accomplice from the Harley main series, Red Tool, and together they traverse across the wasteland formerly known as the DC Universe to get to Gotham City. They fight monsters, an octopus, and a gang of Joker henchmen, which is admittedly fun to watch, but they never assign purpose to the mayhem.

They never once stop to reflect on what their world has become, what they feel about the proceedings, how they want to carry on from there, and, most importantly, what they learned.

This is the book’s greatest demerit and it will leave you frustrated.

Harley is generally regulated to comic relief and “wild card” roles in her team-based ventures. Her entire character arc in Suicide Squad is “oh, she’s crazy.” Meanwhile her main series is often too fixated on parading her down every avenue of the DC Universe that we never get to spend any quality time with her.

Old Lady Harley was an opportunity to get away from all of that because the premise is that most people are dead. And now that she’s alone and free from her comedic commitments, we can spend a moment to probe why Harley constantly needs to be around people, why she’s so co-dependent, and why she’s so self-destructive. But alas, Old Lady Harley only gives us more of the same.

The book is sound script wise. Frank Tieri’s script is nimble, kinetic, and does an excellent job of establishing the world right away, avoids the dangers of clunky exposition that all first issues face, and admittedly got some chuckles out of me. Inaki Miranda and Eva De La Cruz capitalize on Tieri’s momentum by painting us a delightfully depraved world filled with the monsters and octopi and other terrors that I mentioned. But, sadly, all of that effort is for not as there simply isn’t enough substance carry the book.

The book does have hope. After all, it is a first issue and there were slight allusions to character development for Harley and a crowd-pleasing cliff hanger. But hope isn’t enough to warrant a $3 investment. I will check back in on the book around the time the trade comes out but as of now – Old Lady Harley is a mundane Harley story for the sake of having a Harley story.