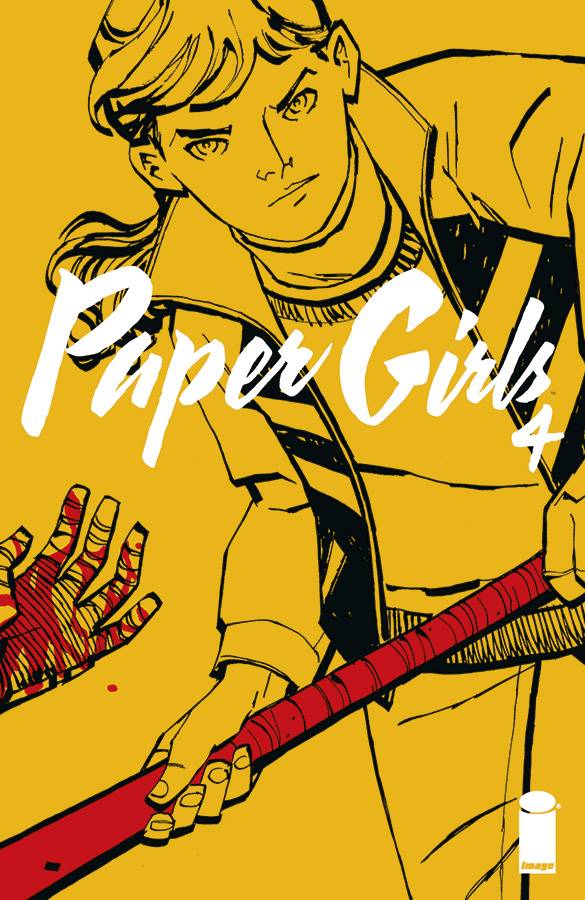 Even through all this, Mac still has her papers to deliver.

Things really have not let up for the Paper Girls. Traipsing through the sewers to avoid their captors with some rather gnarly looking teenagers, the crew comes faces a sudden and unknown threat. Tiffany is forced to come face to face with the short span of her life thus far. In order to help Erin, Heck and Naldo make a move that puts the rest of the crew at odds with what they know as the end of the world.

What I love about Brian K. Vaughan’s stories is that they are small steps leading to much larger epics. Because of this, Vaughan’s stories typically are framed within a narrative long haul. Paper Girls #4 gives us just enough information to carry the story forward, like the monsters, Heck and Naldo, and Tiffany’s “flashback.” Vaughan excels in plot driven stories, but not letting that overshadow the motivation and personalities of the characters. While the girls are all afraid or just trying to make sense of what’s going on around them, they each are sticking up for each other and dealing with the “apocalypse” in their own ways.

Cliff Chiang’s art was made for apocalyptic sci-fi monster epics. The lines are dense and jagged, creating a roughness that I feel contributes to the gloomy, somewhat hopeless tone of the series and this issue in particular. Matt Wilson on colors expertly captures the sense of doom within Stony Stream, Ohio. The sky is an unnatural pink, and everything is immersed in relative darkness. A couple of things stood out to me. First, there’s a monster in this issue that is very bright and vivid and its form is vastly different from anything or anyone so far. This creature stands amongst a dark and fairly straight world as an object of danger and fear, and it’s one of the most brightly colored objects in this issue. Second, there are some stellar double-page spreads regarding Tiffany and her past. I love the colors, the placement of the panels, and the glimpse of everyday objects giving a frame for Tiffany’s activities. These spreads are a gem and, while wordless, help advance the story and demonstrate what makes this series stellar.

In reading Paper Girls #4, it’s super important to get caught up on the series. There’s a lot of information and context in the previous three issues that set the stage for #4. That being said, I like that Vaughan is dedicated to capturing the year of 1988 in all sorts of ways. This context in particular is important to understanding Mac as a character. As the series moves forward, her background gives a framework for her homophobia, something I’m glad KJ regularly checks her on.

Paper Girls is a series you need to be reading. There’s lots of great 80s references, and it has the feel of many films from that decade, as well as modern films set during that time. I’m excited to see where the series goes and hope to see even more out of this awesome cast of main characters.