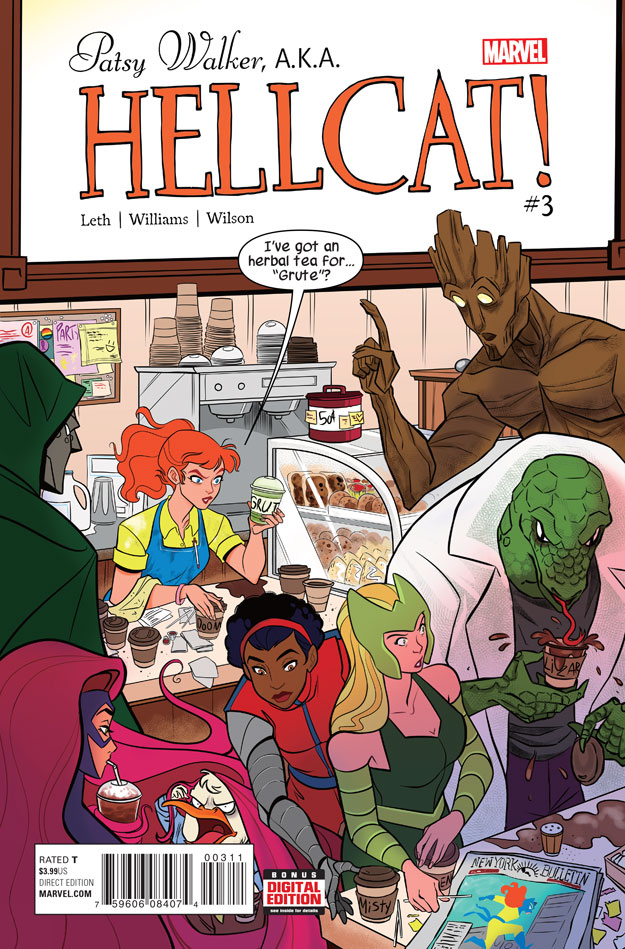 Patsy Walker, A.K.A. Hellcat #3 pits Hellcat against bedbugs and crooked landlords, but also brings in a guest appearance from Patsy’s days with the Defenders. Doctor Strange helps out with a problem and Patsy repays the favor by letting Wong school her roommate in chess.

Like the previous issues of this series, Patsy Walker, A.K.A. Hellcat #3 is a playful romp that showcases the deep past of Patsy Walker while celebrating some of the things that are exclusive to the character. Kate Leth has a strong grasp on Patsy’s personality and quest for a new normal, but punctuates this adventure with an understanding and responsibility to do the right thing simply because it’s the right thing to do.

Naturally, Leth makes the right thing to do a little more fun and entertaining for the readers. She doesn’t have to narrate Patsy’s adventures, she simply brings the reader in and whisks them away, chasing adventure and righting wrongs. Sometimes that quest leads to old teammates, and Let gives readers a believably casual exchange between old friends, further embedding Patsy’s experience in the Marvel Universe.

Around and through that, Leth has populated this series with a growing supporting cast, carefully giving each character a distinct voice and personality. As the cast continues to grow, however, Leth continues to emphasize Patsy’s personality, using every opportunity to define the character completely and succinctly in one issue. Hellcat still has plenty of opportunity to shine in Patsy Walker, A.K.A. Hellcat #3, as the evil bedbugs aren’t just going to go away by themselves.

While I can appreciate what Brittney Williams is doing with Patsy’s shifts in stature and appearance throughout Patsy Walker, A.K.A. Hellcat #3, for my 2¢ (well, three-hundred-ninety-nine cents) I’d like to see a little more of the butt-kicking variation of Hellcat. For instance, when she’s talking to Doctor Strange, the confident, served-alongside-him-in-the-Defenders Hellcat would fit nicely. Her “heroic” take on Hellcat is so reminiscent of Mike Parobeck’s work that the fleeting panels where Williams brings the heroic stance and stature tend to mesmerize me. I’m not saying there’s a need to marginalize cutesy Patsy, but I’m sure a balance could be found, and it wouldn’t have to be permanent, as the more youthful, cherubic Patsy/Hellcat works in certain situations throughout the issue and the series to give Patsy Walker, A.K.A. Hellcat #3 a visual presence not overly common to publications from the big two.

Williams’ art is strong throughout, and minor quibble regarding Hellcat’s projection aside, her panel work is whimsical and inviting. Colorist Megan Wilson and letterer Clayton Cowles collaborate nicely with Williams to add punch and frivolity to the already buoyant drawings. Wilson’s colors trend towards pastel selections, but the intensity of them is so magnificently vibrant that they almost seem neon. The lavender tones used for magic gracefully accent the tale, augmenting the more prominent yellows, blues, oranges and teals. Wilson uses various shades of green as well, defining backgrounds and environments with subtle shifts. Cowles uses the mixed case lettering to give Patsy Walker, A.K.A. Hellcat #3 a more conversational tone, which works nicely, especially given the growing ensemble appearing alongside Patsy.

Patsy Walker, A.K.A. Hellcat #3 is another snappy issue of a series that brings some silly, some sassy, some snappy, and some super moments to Marvel’s new releases. Leth, Williams, Wilson, and Cowles don’t bury Patsy Walker’s history, nor do they let it overpower the series. Instead, they use the past to inform the present and to plan the future. Only Patsy Walker could have a battle against bedbugs in the same issue where she drops in on Doctor Strange, drawing on their common history as Defenders. Patsy Walker, A.K.A. Hellcat #3 is a fun comic, clearly targeted to, well, everyone. Maybe you should give it a try and see what all the fun is about.