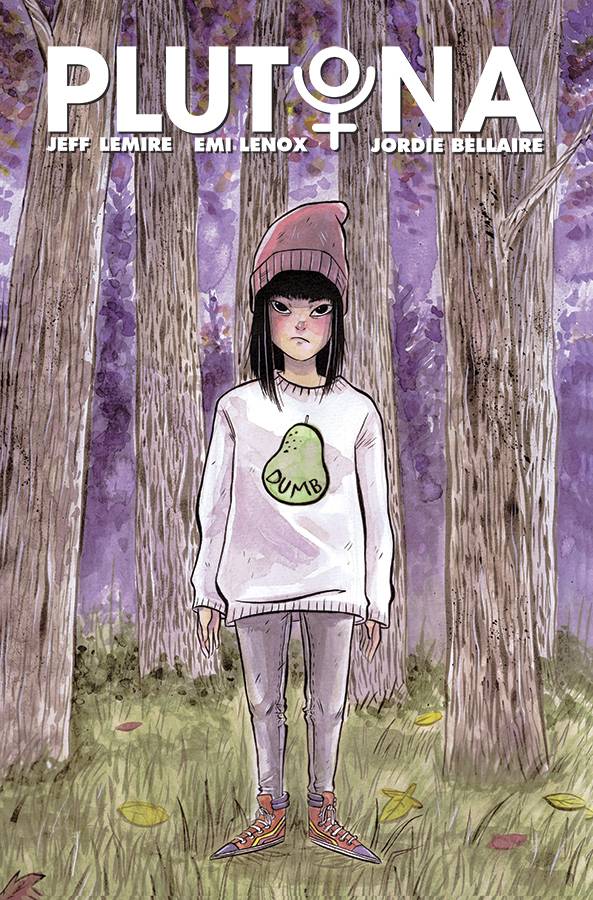 If you read comics, chances are you know New York Times bestselling author Jeff Lemire. He’s had a strong year with Descender, a sci-fi title from Image, and now he’s gracing our presence again with Plutona #1. So, let’s dive in and see what we’ve got here.

With art from Portland newcomer Emi Lenox, this first issue features one of the most visually striking covers I’ve ever seen. And not only that, it offers up a character who is immediately intriguing. I’d like to get to know the roughed-up girl who’s standing alone in a dark forest, wearing a sweater with a pear that says “Dumb.”

After a glimpse of Plutona’s battered body in the woods, we’re off, meeting our pre-teen protagonists in this superhero universe. It’s refreshing to see these different portrayals of domestic life, all of which combine to ground the comic in reality. Lenox does a superb job in making every location feel real and lived in; from Mike’s old Converse shoes, to the magnets on Mie’s fridge, to the breakfast cereal box. These small details, along with Bellaire’s brilliant colors, help to guide me into the world. I feel a sense of familiarity, like I’ve visited before. Mie is the character from the front cover, and she does indeed have a bad-ass personality. My personal favorite, though, is Teddy ‘Tugger’, whose most endearing hobby is ‘capespotting’ – where he catalogues hero sightings over the city on his blog.

The five main characters are keenly observed and well defined as children with disparate interests, so we know that everything that happens from here on out is going to be rife with sticky complication. As the misfits end up together and make a startling discovery (reminding me of Rob Reiner’s Stand By Me), I’m on board with these weird neighborhood kids, and ready to hang out with them for more issues to come.

At the end of the comic is a four-page bonus tale, called “Plutona’s Last Adventure.” Lemire takes over the art in this section, as we explore the titular character in more depth.

I don’t know where the story will go from here, but I can say that Plutona is an emotionally rich, character-driven comic about childhood, identity and overcoming innocence – definitely one to watch out for.