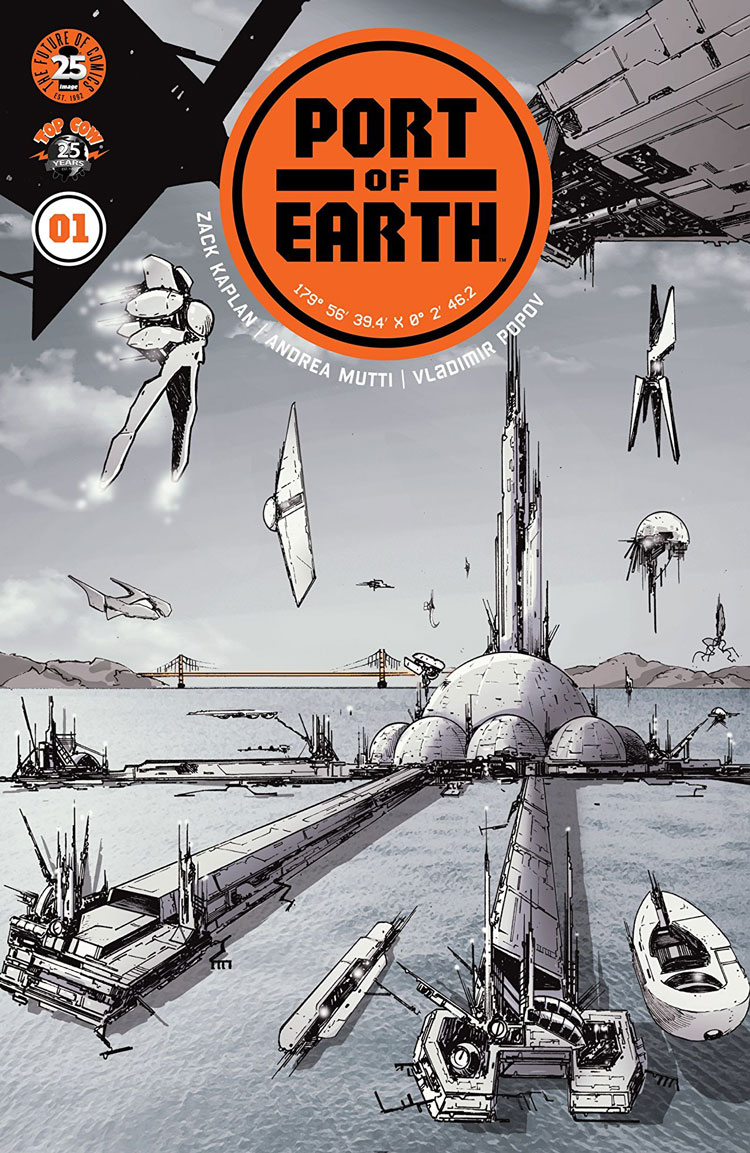 It’s a question that has been asked and answered time and again since storytellers first told their tales. Zack Kaplan’s new comic Port of Earth #1 tackles the question of extraterrestrials arriving on Earth with a different take than the usual “aliens attack” scenario. It’s a realistic alien invasion that is more than likely to play out than what we see in the movies and television. This could be a look into our future.

Kaplan masterfully takes what could be a boring genre story and turns it into an suspenseful tale of dangerous business dealings. The first issue gives the reader a good run down of future history before tackling the problems at hand. He successfully writes a compelling back story that is plausible enough to be believable and relatable to readers. He has also done a great job at handling the global community’s response the aliens.

As some of the first events play out in the pages the reader will most likely feel as if they were watching a documentary on a cable news channel. This brings the reader into the story and setting them up comfortably for the ride. On the first read through the two main characters that appear about half-way through the first issue may seem cliched.

However, a closer examination will reveal that they are a very good representation of humanity’s extremes. One is brash and willfully abrasive while the other is “by the book” and concerned with what others think. It will be interesting to see how they handle the situation they are entering into.

Though globally Earth may have entered into a contract with the alien Consortium, in the end it will be individuals and their reactions to this new status quo that decide our future. Storywise, everything has been carefully put into place perfectly and will leave the reader ready to dive into future issue.

Andrea Mutti delivers solid artwork in this issue and gives the story an organic lived in feel that further pulls the reader into this reality. His designs of the aliens are diverse and strange to human eyes, as they should be, along with the layouts of the alien technologies and ships.

Most of the ship designs are comprised of hard edges and jutting pointy spires. This imbues the alien cultures with a dangerous and cold vibe. The Port, however, has a more softer friendly look to it with round spheres and a layout that is more familiar to human eyes. Designs for humanity’s technology and buildings will be very familiar and relatable to the reader. The story may be set in the future but it is the near future.

Vladimir Popov colors Mutti’s artwork with watercolor washes which adds to the lived in feel of the world. Lots of blacks dominate the pages alluding to the black and white business dealings the visitors have consummated with the people of Earth. The colors that are present in the pages are desaturated which lends to the idea that the events that are happening have already taken place. The more saturated colors occur in the part of the story that deals with news report and interview which appear to have take place after the story.

Troy Peteri letters this issue nicely, though, a little more line spacing would have been nice. At times the text feels a little too jam packed into the speech bubbles. This in no way detracts from the experience of the book though.

Overall, Port of Earth #1 is a great start to another potential hit series for Kaplan. The first issue looks to have set everything up for an amazing story that he is more than capable of delivering. If you love alien invasions but want to see something new done with the genre then definitely pick up this issue. It would be worth preparing for future business dealings with far off visitors.