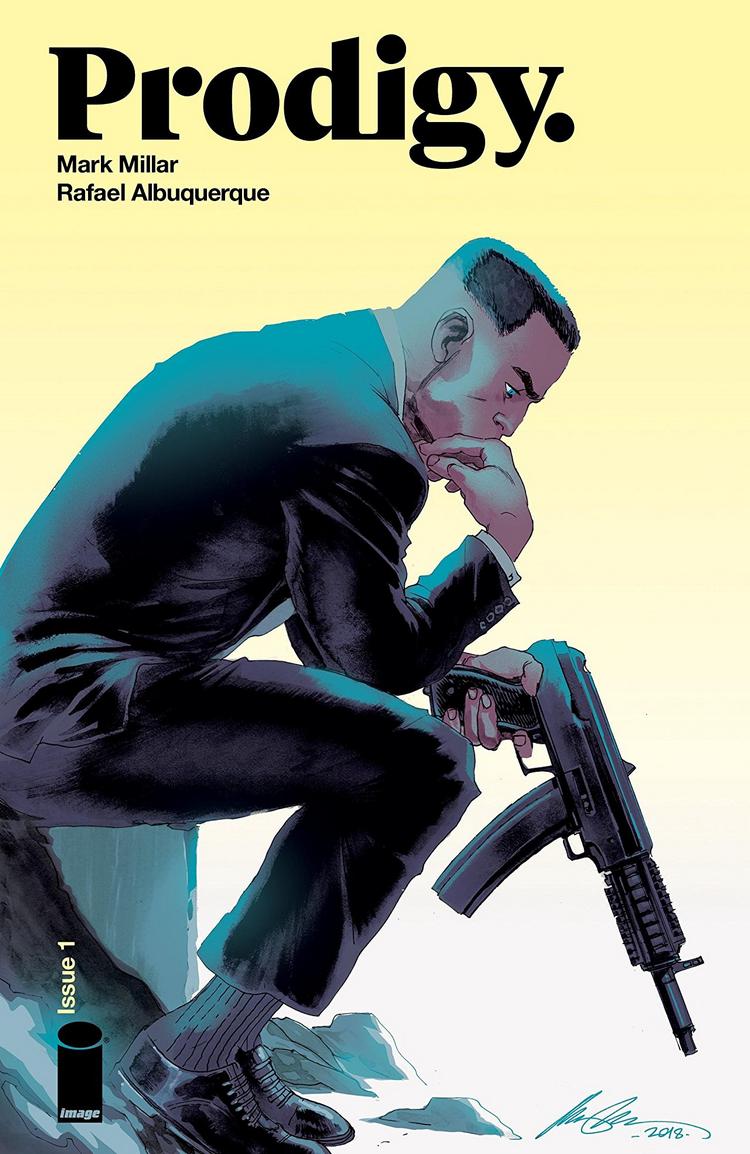 Packed with action, science fiction, and all the thrills of espionage Image’s Prodigy #1 is a love letter to the classic spy genre and certainly one of Image’s most interesting and fun new series.

The book centers on Edison Crane the worlds smartest man and most successful businessman. Millar’s first issue chooses to focus on introducing us to Edison as well as the realm of possibilities within what he is creating. We learn that Edison is the perfect balance of James Bond, Tony Stark, and Lex Luthor. The books central conflict is centered around mysterious appearances of futuristic vehicles appearing out of nowhere and Edison being the only one who can figure it out. I won’t spoil anything, but I will definitely tell you that Edison indeed figures out where the vehicles are coming from and what their appearance means for us.

Over the course of the issue we see Edison at different stages in his life and his development and each glimpse into his past that we get gives us a little more insight into just how smart he actually is. One of my favorite scenes in the entire first issue is when Edison becomes the victim of bullying when he is eleven years old. This is the first time that we start to understand just how smart and remarkable young Edison is, when he decides to exact his revenge through martial arts moves that he masters from none other than watching Kung Fu movies. Young Edison takes the weekend to memorize every detail and mentally catalogue every single one of Jackie Chan, Bruce Lee, Jean-Claude Van Damme, and Chia-Hui Liu’s moves. Now if you’re anything like me you were probably expecting young Edison to show up to school Monday morning and get his ass kicked all over again, but much to my surprise……over the course of a weekend he became a martial arts master. This is just one of the many fantastic feats that we see from Edison over the course of the issue and I honestly found myself finding it hard to look away.

Rafael Albuquerque’s art is the perfect fit for Millar’s high sci-fi espionage setting. Albuquerque proves beautiful art that grabs you by the face and demands your attention with its wide-eyed scope and cinematic scale. His attention to detail and the way he sculps the characters makes the issue feel like it’s not just the first issue of a comic, but also the first episode of a tv series that is sure to be the talk around the water cooler. Colorist Marcelo Maiolo surely isn’t to be left out for his stunning use of color. Maiolo does a fantastic job of blending and balancing the use of flatter tones with bright high energy colors when needed. You truly get an understanding of just how skilled Maiolo is when you get panels using different shades of the same color and each instance providing a different texture and effect. Millar, Albquerque, and Maiolo is the perfect partnership and I am honestly beyond excited to see where the trio goes with the rest of this series.

Overall Prodigy #1 is a fantastically entertaining read with beautiful art and a story that’s sure to get your interest. Mark Millar may have just created his best character in Edison Crane and dare I say it might even be some of his best writing. It’s not easy crafting an original comic, but as Millar has proven before he is more than up to the task and does a damn good job at it each time he steps up to bat. By the end of the issue we are left with a pretty good understanding of Edison Crane and the type of man that he is. The issue ends just as it began, not with a whimper, but with a BANG, as it is certainly getting right to the point and setting us up for the goods. I’m beyond excited about this comic and seeing where Millar takes this character and if I’m being honest after one issue I’m already interested in seeing the character make the jump to the big screen.