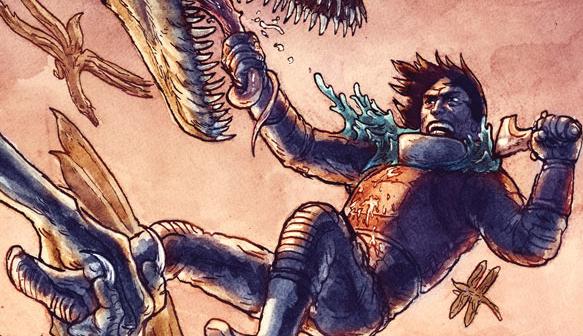 Desolation. If this was a ‘use one word to describe the entire’ comic game there would be no other word that fits as well as ‘desolation’. Brandon Graham does a fantastic job in Prophet #22 of evoking a sense of hopelessness in the desolation facing John Prophet. The issue contains very little dialogue, but through the skilled use of narration and some excellent layouts the story drives forward at a great pace. The lack of dialogue appears to have streamlined this portion of the story and by the end of the issue I found myself very happy to not have been bogged down with lengthy detail. John Prophet is in pure survival mode and the lack of verbose dialogue is extremely fitting considering the conditions he is in.  Graham has impressed me with his ability to keep the issue interesting, throwing some great curve balls in at the end of the issue and taking the slower pace of the early portion of the issue and completely smashing it to pieces. This tactic was executed perfectly and sets the next issue up extremely well.

Simon Roy has the task of keeping a desert caravan visually interesting, something I suspect no penciler would find easy. Roy keeps the issue interesting with a variety of layouts and a new visual take on the aliens John is encountering. These are not typical ‘alien species’ that we see in other comics, this caravan is a bizarre place and Roy takes that concept and runs wild with it. The detail in the caravan is superb and while there were times I had no idea what I was looking at, I found myself investigating to find out what it was due to my increased fascination for where this creative team had put John. Prophet appears to be in very strong creative hands and I look forward to finding out what happens to John next. If there is one thing this issue and Extreme re-launch has taught me it is to expect the unexpected.