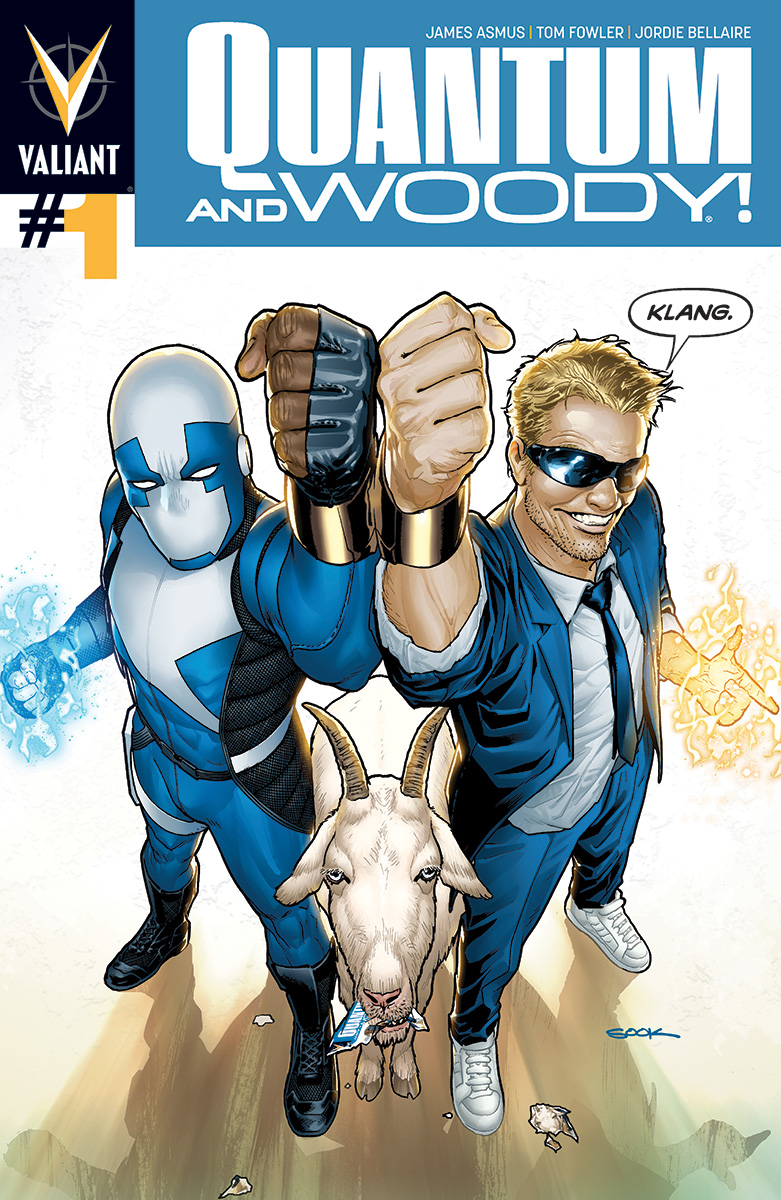 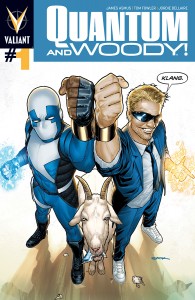 The super-hero odd couple of the 1990s is back, as Quantum and Woody returns to the stands with a new creative team from Valiant Entertainment. Straight-laced Eric Henderson and his con-man adopted brother Woody may have grown up together, but they couldn’t be more different — and distant — as adults. But when their father dies under mysterious circumstances, they both feel an obligation to discover the truth within his science lab. One comic book accident later, and the two are on the road to becoming the World’s Worst super-heroes, together whether they like it or not.

Writer James Asmus takes up the reins of the series relaunch, introducing the reader to both lead protagonists in swift fashion. By the end of the issue, both Eric (ultimately to be known by the name Quantum) and Woody have distinct personalities — cartoonishly polar opposites really — and their back-story is firmly established. How they relate to each other, while not explained completely, is alluded to with enough information in the flashbacks that one should not be surprised that either sincere acrimony or comical hijinks will erupt with their renewed pairing. The problem is that while both scenarios result from Eric and Woody’s reunion, neither goes far enough to be genuinely compelling. The humor is mild, with quips and dialogue not quite funny enough to elicit out loud laughter, and the drama feels artificial, not raw enough to make me feel like these are more than caricatures on the page.

Luckily, some of the funnier moments are subtly rendered by Fowler in illustrated form (I admit to cracking a smile seeing Woody peeing into the hotel bathtub with an available toilet mere feet away). But instances like that aside, Fowler’s pencils almost seem to be more reminiscent of Eduardo Risso or Jeff Lemire, two artists whose work almost always benefits from darker tones and more serious content. What we’re left with is not the strongest combination of art and subject matter, but certainly an issue without sincere flaws of any kind. The interiors may not stand out as sincerely as Ryan Sook’s cover does on the stands (wowza, that’s a nice design), but they hold their own.

While this first issue certainly provides enough story to get any newbie (like myself) into Quantum and Woody with a fair amount of curiosity to spare, my hope is that what we’re getting here is simply a warm-up to characters who have never been handled to any great degree (and not for many years, in fact) by anyone other than their original creators. Like lukewarm TV pilots that can eventually lead to knockout hit series, the kernel of a great book seems to be in here. Just how long it takes to fully evolve is the big question. Given Valiant’s recent track record with title launches, however, it’s likely worth the wait.