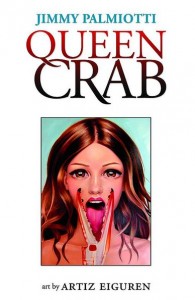 I have no idea if you’ll like this book. Not the best way to start a review, but it’s the most honest in this case. Funded through Kickstarter, Queen Crab is a graphic novel by Jimmy Palmiotti published through Image. Vertigo should be embarrassed their name isn’t on this gem of strange, it is just the kind of work they excelled at publishing in their early days. Palmiotti has complex and often unlikable characters populating this book and not a cape in the lot.

Great storytelling by Palmiotti. The best advice I can give is to read the book in a sitting and do not look for him to hand you a moral or a tidy package. Despite the oddness of what happens to the lead character, Queen Crab isn’t a book about super powers, it’s just the story of Ginger, a woman who lives every day by her own rules no matter what the world throws at her.

I’ve never encountered Artiz Eiguren before, and I wish I had. The art shows great story-telling flow and sets a good pace. Eiguren’s art is quite naturalistic and keeps the story grounded in reality. In other hands, this story could easily have drifted to horror or supernatural and instead it keeps the focus on Ginger as a regular person. The short sections of wordless art move very smoothly and really show off Eiguren’s skill.

Foul language, nudity, gratuitous sex, and Coney Island.  This has everything you need for a weekend of strangeness. I know it won’t be for everyone, but Queen Crab is a style of comic book I have been missing dearly the past few years.

Listen to Keith on the We Talk Comics Podcast