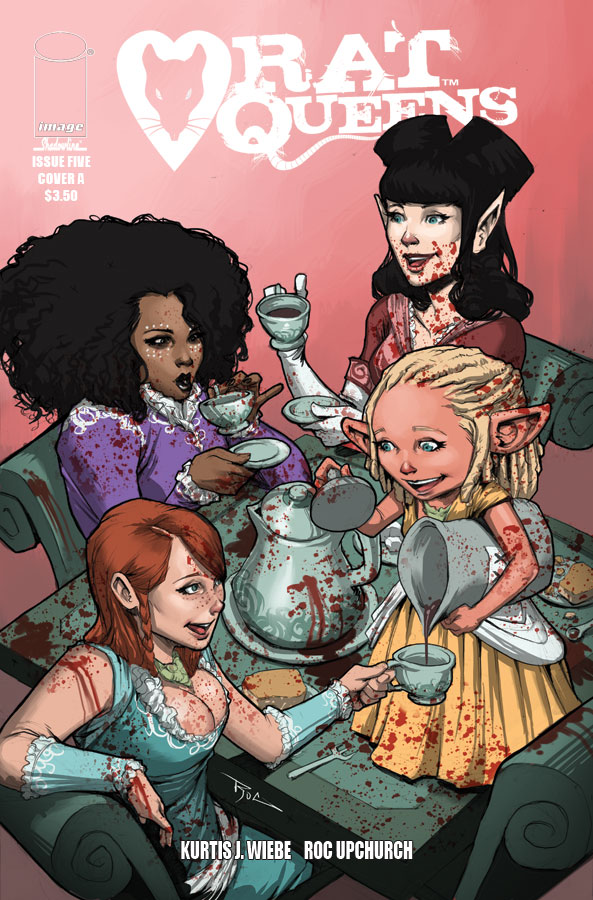 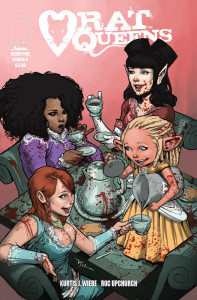 The four butt-kicking gals of a D & D squad gone drunk are back. The fall-out of their almost “court-ordered” rampage against a local troll continues as well as the surprising reasons behind the local hit out of the adventuring groups, that protect the city, have been targeted. But wait, you say, that was revealed in issue four!… Was it really?

The action continues with a shocking flare in this issue as the results of their troll-girlfriend revenge battle. The jaw dropping conclusion in the first half of the book will lead you to believe none of the Queens are safe. While the immediate remedy was already established in previous issues, there is enough concern that you question if Wiebe and Upchurch are willing at anytime to replace any Queen who does not speak to readers. This is especially true with such a great supporting cast of characters, further explored in the second half the book.

There, Upchurch continues to play with the characters in emotional expressions of a wide variety. Readers get a chance to see first hand how the Queens party and the exact personalities that each character represents. This allows every type of reader to feel like they are part of the story. Some may feel this creates stereotypical parts that people play within the fantasy genre. However, the unapologetic opinions of each character shows how, while they reflect personalities people can identify, they do not necessarily fit into neat little corners. Upchurch makes it clear through clean lines that have been roughly shaded and boldly colored how lively and adventurous this world can feel.

If you have been on a wait-and-see with Rat Queens this is the issue where you throw all of that out the window and catch up so you can be just as shocked and won over as I have been by the set-up for further adventures created with this issue.