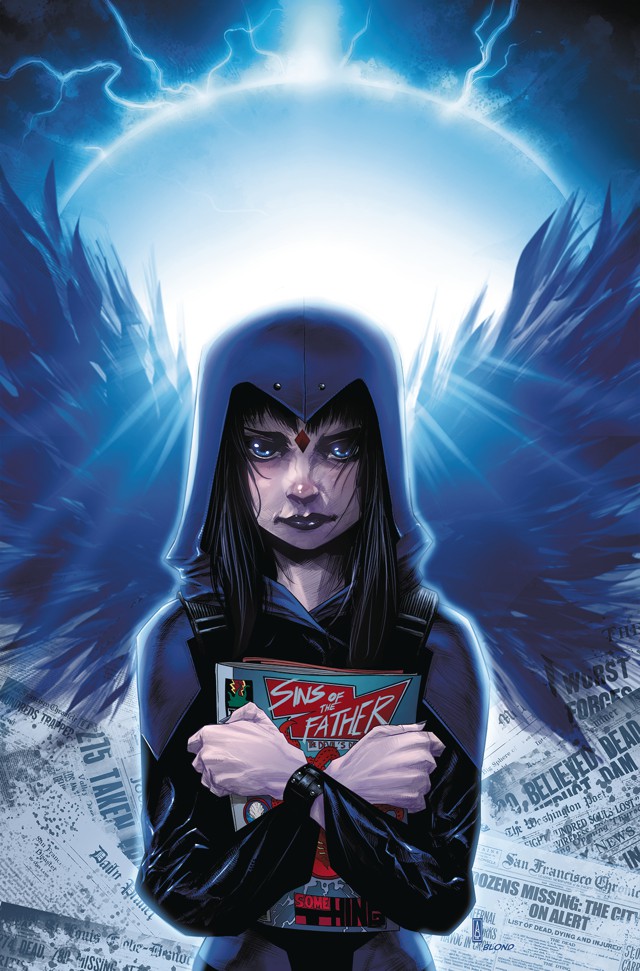 You never need that many pillows.

Raven has decided to stay with her extended family after the dissolution of the Titans and the loss of her friend. While she seems to stick out like a sore thumb initially, she’s surrounded by love at home and at school. In her endeavors to be ‘normal,’ she encounters someone who shakes her to her core and creates a new world of mystery for the half-demon hero.

My first thoughts when finding out about the Raven miniseries centered on my experience with the Huntress mini in 2011. That miniseries was a shining point in the New52 and helped me understand what I was looking for and what I would find. If the first issue is any indication, Raven is going to do the same. I love the classic elements from her story and how they take place, and I love how she’s the kind of strange that doesn’t automatically isolate her. In many ways, Raven #1 showed why she’s compelling, a hero, and one of my favorite comic characters.

With Marv Wolfman spearheading this series, it makes a lot of sense why classic elements from Raven’s story made it into a post-New 52 series. Wolfman manages to condense years of history borrowing from different aspects of continuity into a story which still makes Raven feel like a fresh character. Even though she is somewhat displaced while living among non-metahumans, she still to some degree grasps life around them, even while endeavoring to control her powers.

Alisson Borges’ funky and emotive art creates layers to the Raven narrative. On one hand, her place among other humans seems almost comical, but not to the detriment of the story. On the other, her slightly askew image creates just enough distinction to separate her as an important element. Some of the pages feature awkward faces or bodies, but overall Borges’ style fits within Raven’s universe and story. Blond’s art further helps to establish Raven as a point of focus by casting her dark blue hues against the muted forms of her classmates. So much of her environment feels idyllic through the issue, save for Raven herself and her dreams, which helps to distinguish Raven and highlight her differences from those around her.

If you’re a fan of Raven, whether from the 80s or now, read this issue. This is the reintroduction we needed years ago so I’m glad we are getting a chance to dive into the life of a Titan with a dark history but bright future. Raven #1 gives just enough to make her interesting while setting up what looks to be a truly shattering and evocative story from here. I’m interested to see where the story goes and how it ties into this new era for DC.