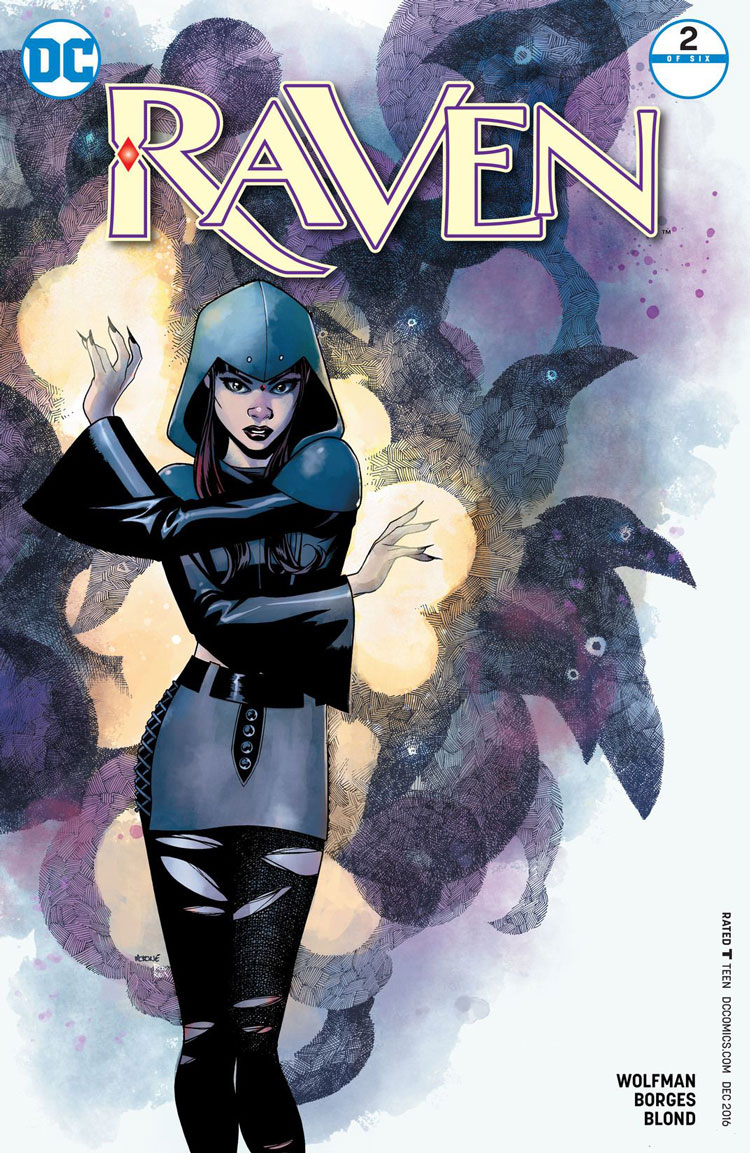 As Raven tries to fit in at a normal high school, she finds a mysterious entity taking people at its whim, a being that can scan her soul like her brothers.

It is a pleasure to see Wolfman writing for Raven once more. I’m fangirling as I type this, his work is remarkable and this is no different.

I may confess that I have a soft spot for Raven Classic, a more otherworldly, more somber character, but this newer portrayal combines the best of the original Raven character with hints and touches of the Raven you may know and love if you grew up with the Teen Titans television show. Wolfman not only delivered fantastic writing for Raven, but the whole supporting cast was wonderful (I honestly love Antt the most, but that may be because I empathize with her name struggles).

Borges’ work is spectacular. Her art style adds greatly to creating an atmosphere that feels like a combination of The New Teen Titans comic and Teen Titans show. I would say the faces she creates are what really stands out to me in her art. Raven is generally not the best at expressing her emotions, so Borges’ portraying Raven’s emotions through her body language, especially her face, really adds a dimension to the character.

The pop of personality in Raven doesn’t just come from the drawings and the writing, but the lettering and colors as well. A Larger World’s choices in lettering, from giving Raven her own specific type of narration box to the creepiness in the cracking of the white entity’s words, brings flavor to the comic. Blond’s coloring when it came to Raven’s Soul Self or inside the White Carnival are beautiful as well.

The White Carnival taking people into itself is my favorite scene. The bodies picked up like ragdolls as policemen scream helplessly into their radios. Raven watching as a whole crowd falls into an empty white void where she can’t sense their feelings. The most devastating part is when Raven can’t sense Antt.

Raven stands up in denial after failing to save her friend. “Where are they? Where is Antt? …Can you hear me? Where are you?” Blood pours over her eye, her body wrecked as she runs towards the abyssal whiteness. “Where is everyone?” Quiet loneliness seeps into that sentence.

Raven has dedicated her whole life to controlling her emotions in order to save worlds from the wrath of Trigon. She devotes everything to saving people, despite believing herself to be selfish. Yet she can’t do anything. She can’t save anyone from the White Carnival.

Raven should be read, not just because Marv Wolfman is a treasure, but because the entire team does an amazing job. I’ve always been a fan of Raven and this comic does her justice. I highly recommend it!