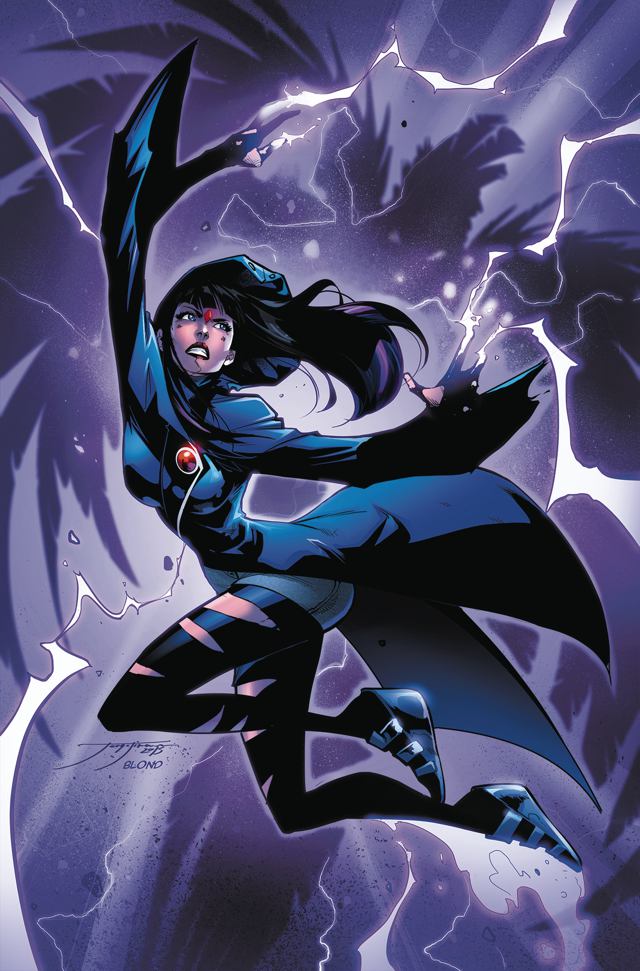 People are disappearing and Raven is locked in a battle with her soul-self. After mastering her inner conflict, the spawn of Trigon does her best to try to understand what’s occurring around her while maintaining some semblance of control. Raven wants to save the world, but the blocks that stand in her way force her to confront who she is as a person and as a hero.

Raven continues to provide a look into the character’s life in the present while addressing some of her classic elements. Still, there are pieces that work and some that don’t. When it comes to Raven, capitalizing on her inner conflict can lead to a contrived and repetitive story, though I also feel this is the best way to draw out what makes her an amazing character. There are some moments, such as her inner workings, which are absolutely ace, while others do feel forced. I would almost prefer a story which solely focuses on Raven’s challenge to reconcile the demands of a shadowy force with her own humanity, rather than enmeshing this story within another.

You can tell this issue was written by someone who both understands and had a hand in creating Raven, even if there are instances that don’t feel fully put together. Marv Wolfman’s capture of Raven’s inner dynamic is one for the ages. There are some particulars that don’t work for me, such as the inner dialogue and that of her friend ANTT, as well as the inherent evil nature of the Soul Self, but this scene also portrays the amazing parts of Raven and her struggle to overcome her demonic heritage. In execution it felt slightly off, but the end goal is one that takes great care to dive into our heroine’s signature struggle, steadily highlighting the reasons that make her a compelling character.

The best art is seen within the ghostlike images of the first couple of pages, courtesy of Alisson Borges, and the soft images of Raven’s conversation with the deep parts of her mind and memory, penciled by Diogenes Neves, inked by Ruy Jose, and colored by Blond. Through the story, some of the images feel overly heavy though for the most part they don’t detract from the story. The detail and lines in some of the images feel overdone, not really taking advantage of the inherently raw emotions within the story. Despite this issue, the colors are well done and Raven’s spiritual dilemma is expertly captured in the soft, pastel images that represent her body and mind’s struggle to survive.

Raven #4 touches on some of my favorite motifs in Raven’s story, from her evil roots to her struggle to maintain relationships with other people. There are some beats that were missed in the story, but it’s still one I’m excited to read. With only a couple of issues left, I hope there is a neat resolution that pushes Raven forward while also honoring the legacy set forth for over thirty years. There’s not much action, but this issue does at least have some important notes that are vital to the character and her place in DC’s new status quo.