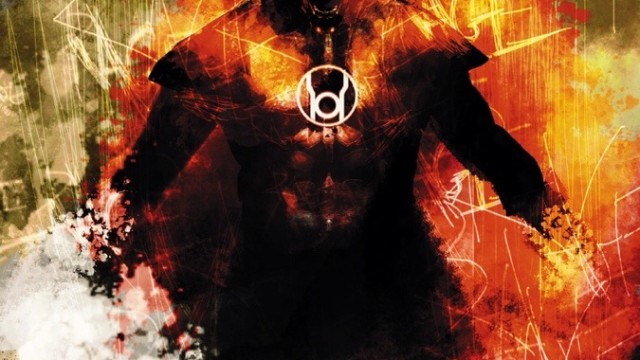 This issue starts strong with the prospects of the coming battle between two Lantern groups, but quickly devolves to head-scratching plot that feels forced.

Over the past three months Supergirl has been shown to be a very raged-filled super-being, and one of the Lanterns most powerful weapons. Despite this, much of the issue is filled with Guy exclaiming over and over that a coming war is not Kara’s fight, despite her losing new friends as well. After taking time to show that she genuinely has come to accept this loud mouth, snark-aleck group as her family, she is shooed along like a child that needs protecting. The whole exchange feels very unnatural so that the story can align with the bigger picture. This happens when you have a crossover storyline still happening just a few months before a major publisher-wide event.

The friendship-affirming feeling that there is a place for everyone in the universe that was created in the Red Daughter of Krypton crossover gets a hasty summarization, on the Red Lanterns side here. The removal of the red ring powers is in next month’s Supergirl, which leaves Soule with 20 pages to start a civil war between Guy Gardner & Atrocitus and give Kara Zor-El her illogical exit.

Plus, if you’ve followed the growing relationship between Kara & Bleez, you’ll find no heartfelt goodbyes or exchanges that belie any mutual respect.

Aside from Supergirl’s forced exit, there is a strong set up for the growing battle with Atrocitus. Bleez is forced to make a difficult decision that weakens the whole group. Soule also reveals a frightening prospect to new readers about the Red Lanterns and their ability to control their sanity without Atrocitus’ blood lake.

Calafiore does a suburb job of creating a tense and action-packed beginning. The terror filled image of Rankorr, who has been captured in the previous issues, is a striking splash page. Guy Gardner’s haggard appearance speaks to the toll of wearing the red ring, and Atocitus is almost regal with his return. The red powers feel like they have more of a uniform appearance than compared to previous issues, which creates a beautiful tapestry while fighting insues.

There is plenty to love here, despite the Kara debate, and I know several people who, after reading this issue, are going back and picking up back issues to read the full Red Daughter of Krypton storyline. It’s a good transitional set up for the coming civil war, even if left with a feeling of what a proper goodbye with Kara could have been.