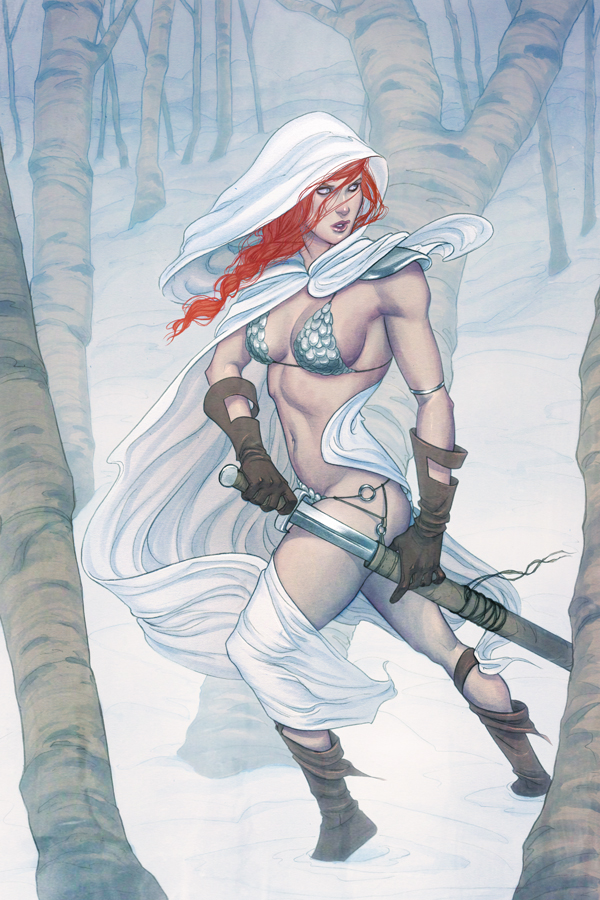 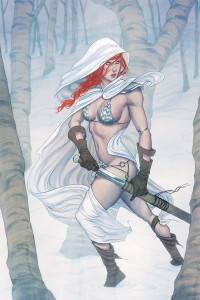 The earliest days of the woman who would come to be called Red Sonja are recalled at a most inopportune time — upon her deathbed! As Sonja suffers from the plague that has swept village after village, she meets with a figure from her past, and remembers the day she lost everything in the process of becoming the warrior she ultimately would be.

For many die hard Red Sonja fans, this issue might be a bitter pill to swallow. To say Gail Simone comes in with a big sword and cuts a swath through a great deal of Sonja’s original mythology is putting it mildly. Gone is her brutal rape at the hands of her marauders, as is the timely intervention of the goddess Scathach. But in their place is a version of that tale that establishes Sonja as a powerful, albeit innocent, character of her own motivation and skill. A natural hunter, bowswoman and tracker from childhood, Sonja was treated to the same privileges as her brothers, right up until the moment she showed mercy (or perhaps simply empathy). The conditions under which she loses her family are no less tragic, but the overwhelming sense of victimhood in her origins is gone, leaving us with a protagonist who has made her own destiny and fought for every inch of life since — her own and others — right until the end.

Simone’s internal monologue for Sonja rides the delicate line a lot of genre fiction oversteps, between formal or somewhat literary sounding and stilted satire, infusing just enough breath between thoughts and introspection to make Sonja feel fully realized as a character. There’s a certain nobility to her thoughts, which feels a tiny bit strange for a barbarian with no home or connections to speak of, but in a sense also recalls the classic ronin figure. With no master or land to speak of, the ronin wield their prowess with great majesty and honor through many depictions, and Simone’s Red Sonja would fall right in that mythology.

Walter Geovani doesn’t have much chance in this issue to show off a warrior Sonja who is simultaneously sexy and powerful — subject rather than object — alternating between depictions of youth and near death. However, the shifts from fury to compassion, exhaustion to exuberance, all show a deep range of emotion that Geovani is clearly adept at delivering. His panel layout keeps the flow of the script moving without a great need for large spreads or full page explosions, yet I never get the sense that the action is contained or limited. And maybe it’s just me, but I tend to judge artists, particularly on books with female leads, by their ability to draw good hair. Sonja is clearly in the most skillful of hands here.

A new, more empowering take on a classic tale, Red Sonja #3 continues to deliver a vital, three-dimensional version of one of comics’ most classic heroines. Like Palmiotti and Gray did for me with All-Star Western, Simone has managed to capture my attention on a genre book I could scarcely have imagined buying, much less enjoying, prior to this point. A standout book for Dynamite’s sometimes overwhelming pulp hero line, Red Sonja is highly recommended for those seeking out new, smartly written adventures that will hopefully capture your imagination as much as it has mine.