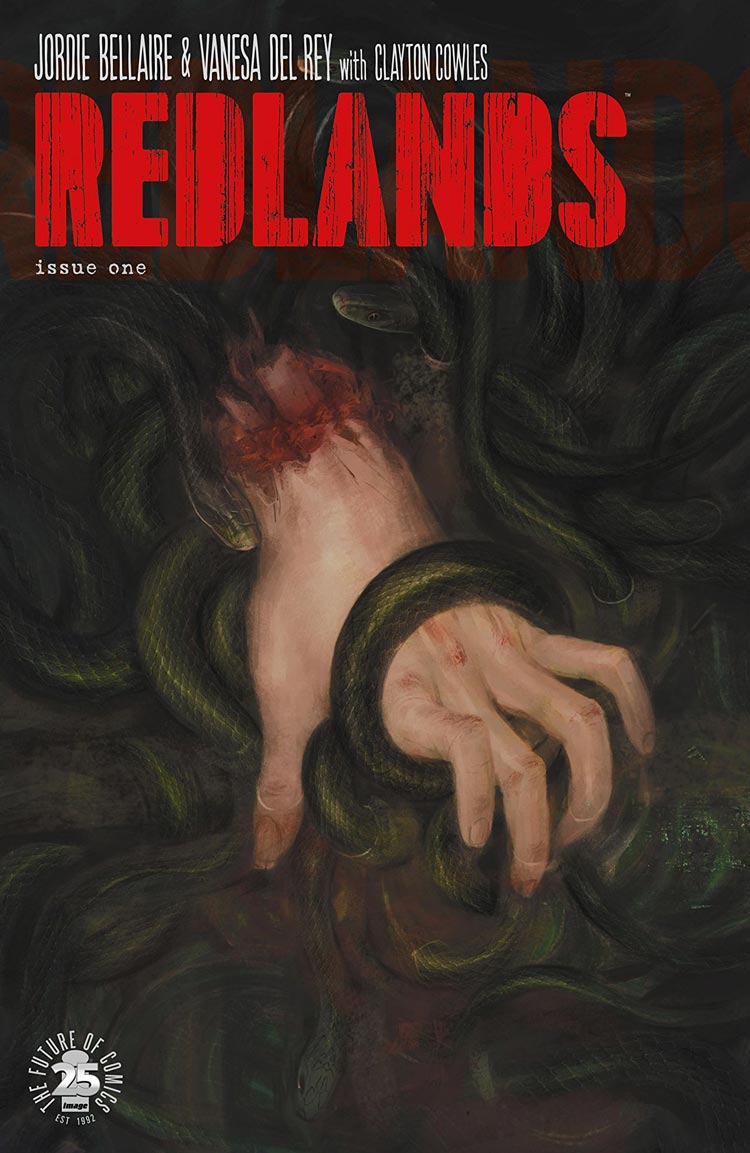 One of the best color artists in comics is stepping across creative lines to write a comic and not surprisingly, what results is vibrant, striking, and detailed in both the storycraft and the art.

Redlands #1 begins a new occult-heavy, suspenseful horror title from an excellent, passionate creative team. Jordie Bellaire not only writes the comic, but colors it herself. The team is completed by adding Vanesa R. Del Rey on art and Clayton Cowles on letters. It is very clear that this team owns this book, and the hard work and pride put into this monstrous tale is tangible.

This issue opens on a scene already set: an unexplained lynching gone wrong, a seedy group of prisoners, a father and son of the law, and some very mysterious women. This is an innovative introduction, devoid of empty exposition or introductory scene-setting. Redlands forces us straight into the action, as if the story assumes we should have been there the whole time, and it’s our responsibility to catch up. This means there is not a clear main character to follow yet, or even a clear idea of which side we should support. This might be jarring for some readers, but it is in interesting jump into a new series that feels fresh and suspenseful.

The storytelling feels a little sparse for an introductory issue, but the work required to figure out what’s going on in this creepy Florida town is an unexpectedly fun and exciting facet of the issue, rather than a negative aspect that it would be in most comics. There is very little character development or story movement, but it feels complete anyway, which is a strange but not unwelcome creative feat. The issue almost seems to read backwards, as we are dropped headfirst into the action and then spend the rest of the issue wheedling out bits of information that lead back to the beginning of the end. Bellaire definitely has something special here— it’s just not clear exactly what that something is.

The art fits the style of this story beautifully. The sketched lines, incomplete faces, and sparse backgrounds could easily feel incomplete, but its obvious that each line is placed meaningfully, even if it isn’t straight or perfect. There are a few panels toward the end that have strange angles, that almost distract from the movement of the story, but overall the art helps focus the story and reveal tidbits of information that only add to the suspense.

The story was obviously written with color in mind, and Bellaire plays to her strengths. As the story progresses through dark basements, power outages, and vibrant flames, the story and the color story completely intertwine. This, combined with Del Rey’s creepy, half-formed style and some excellent lettering from Cowles, bring the entire book together in one fantastically terrifying issue.

The most touching part of this comic is the letter in the back matter, a letter from Jordie Bellaire to the readers. it is very clear that she is creating his book for herself, and for people with similar experiences. In a letter she published online following the release of Redlands #1, Bellaire states that “…Redlands is a gigantic hate letter to all the people who did hurt me throughout my life. Strange how writing becomes really personal without any conscious effort at all.” It is clear that Bellaire and the entire creative team have left pieces of their own experience in this book, and that is what makes it so interesting and personal.

Overall, this book was creepy as heck and I absolutely loved it. If the cover wasn’t any indication, this comic has a heavy horror focus, but the hints at witchcraft and occult leanings make it so much more than a gory horror fest. There are themes of racism, power, and hubris that are yet to be explored, but seem promising. If this issue is any indication, the second installment of Redlands is sure to be confusing, bloody, scary, and really, really good.

If you are a fan of Southern Bastards, Harrow County, or Winnebago Graveyard, pick up Redlands next. This is clearly one of the best horror comics of the year.