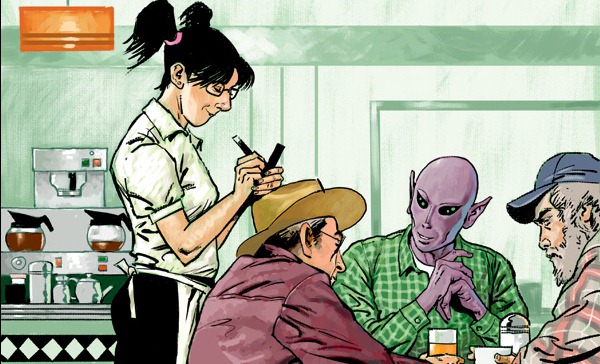 What a unique book. That’s the thought I can’t shake after reading Resident Alien #1. I quite enjoyed issue #0, which collects the Dark Horse Presents material this series comes from, but Hogan and Parkhouse really brought their “A” game for issue #1.  Resident Alien follows Harry, an alien stranded on Earth, dragged into being the physician for a sleepy town embroiled in a murder spree. This book reads like watching an episode of Murder She Wrote, I actually felt cozy and relaxed reading this book, which was a nice change from the high octane violence of many comics. Hogan’s dialogue and writing style is smooth and reads as though it is effortless, though there is definitely thought going into the words chosen in this book. It is a fantastic murder-mystery with a twist, and that twist is a lot of fun and adds a huge level of suspense. Hogan really has taken this story into realms I haven’t seen comics go before and it makes Resident Alien an enjoyable read. Hogan has built an interesting town and a great premise for this book and I think anyone who likes a good mystery can get enjoyment from his script.

But a script is only half an equation, and the visuals don’t disappoint, either! Steve Parkhouse keeps the visuals of this book easy on the eyes and perfectly represents the quaint town lifestyle. Nothing moves quickly here, nor does it need to, and Harry, while an alien, is exceptionally expressive. This is one of those great creative pairings: Hogan and Parkhouse are in sync on Resident Alien and the reader gets to reap the reward of their hard work.