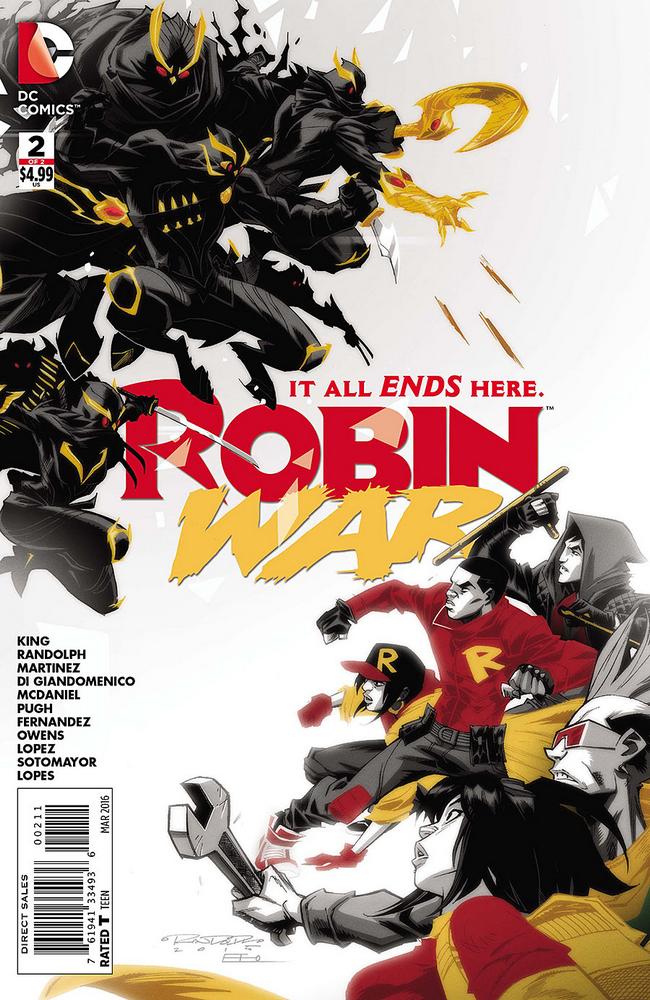 A new era for many members of the Robin-hood (I had to) as Robin War #2 closes out the conflict between the Robins and the Owls.

Tom King started this war and, by God, does he ever finish it. I’ve enjoyed the crossover, for the most part, but something that stuck with me all along was that I liked the first chapter of it the most. This has changed, with Robin War #2. I like the last chapter the most.

King takes the strongest, most dynamic characters in the bunch and dials in on them, giving Damian and Duke, in particular, some amazing moments in this comic. King’s dialogue is fantastic and the seeds he plants in this story for the ongoing books of each respective Robin are awesome. This War doesn’t get tied up with a pretty bow at the end, there will be major repercussions and King doesn’t shy away from showing some seriously emotional moments. I’d argue there is huge character growth occurring in this comic and Robin War #2 is another win for Tom King. If DC editorial sees this review, I want them to know that I want a Tom King “Court of the Owls” book infused with politics and I want it now.

Like the first issue of this crossover, the finale is jam packed with art teams. While their styles differ, I’m happy to report they all brought their A-game to close this event out. Khary Randolph, in particular, stood out and his pages were fantastic. These artists had a huge cast to work with and editorial assigned them well to their story beats. Often, when you’ve got this many artists working on a single issue the word that comes to mind is “mess”, but Robin War #2 is far from it. I was very impressed by the colour work as well, as the tone of the different locations in the story was driven home very nicely by each colourist.

Robin War #2 caps off this crossover with a bang and I am excited for where the aftershocks of this story will take some of these characters. Tom King, Khary Randolph and the rest of the art team deliver a great story with some very memorable moments and if you’re a fan of any of the Robins and were waiting to see what the verdict was on the entirety of Robin War, I can say with certainty that you should check it out.