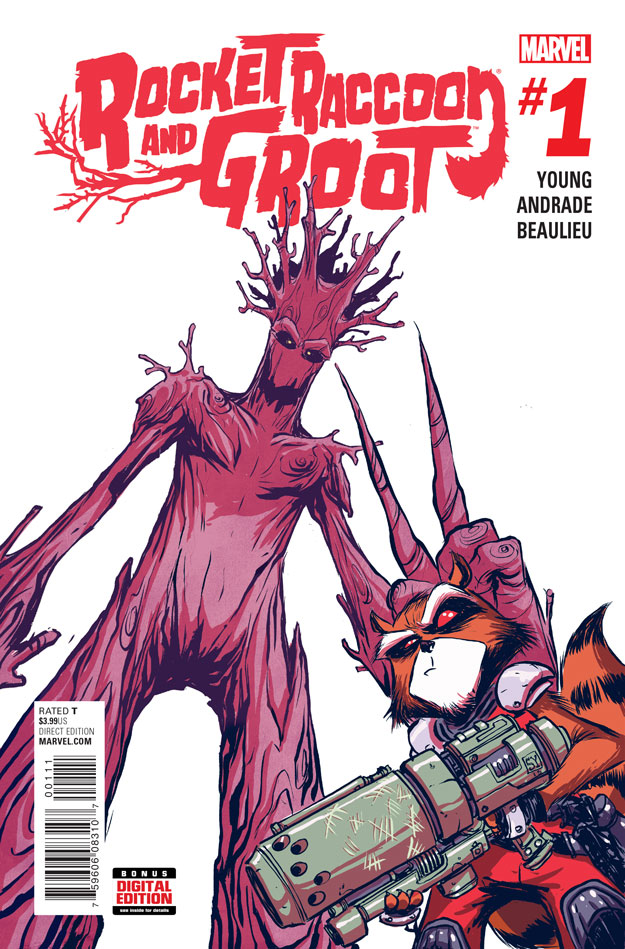 Rocket and Groot have had a hell of an eight months. After facing farewells, wormholes, and space marsupials, our favorite not-raccoon and tree pair have a strange adventure ahead of them.

Skottie Young sets up some interesting narrative parallels in the beginning of the issue. A couple of characters are strikingly similar to our animal and arborous do, providing some interesting and timely comedy throughout the issue. Two others show up at the end, though, that lead to a lot of important questions for the series moving forward. There are a number of possibilities for the next issue of Rocket Raccoon And Groot, and Young is slowly but surely laying the groundwork for what looks like a starkly different story for this pair.

Filipe Andrade’s art is grittier than I was expecting for the series. Though to be honest, I had no idea what to expect. What Andrade’s art delivers is a tone I feel matches Rocket Raccoon’s gruff, abrasive, and rather rogue-like behavior. The story has a darker feel and story, so Andrade was a great pick to be on this series, as each of the characters look rough-and-tumble against the backdrop of space and technology. In line with the shadowy art, Jean-Francois Beaulieu’s colors mesh with a story about seedy exchanges and tyrannical space rulers. The tech is bright and shiny, while the environments are rather dank and grim. This series isn’t about a loveable tree with a cute foul-mouthed companion, so this art team does well by giving us a more serious illustration of Rocket and Groot’s adventure.

Going into this series, I had no idea what story would await me. Even in the first few panels I was taken aback, fully realizing this wasn’t the type of Rocket and Groot story I had been used to. While it’s not my typical comic book story, Rocket Raccoon And Groot #1 raises a lot of interesting questions, particularly about life for this interstellar duo since the end of Secret Wars. I like that Skottie Young is exploring a more bleak story because talking tree and raccoon can very easily fall down the funny cutesy hole, though this was assuredly done well in last year’s Groot series. What I hope for as the series progresses is a story that explores Rocket and Groot’s friendship and its tests and limitations. There have been some great moments between those two characters to point to an important sentimentality, so I want to see what Young does with this relationship.