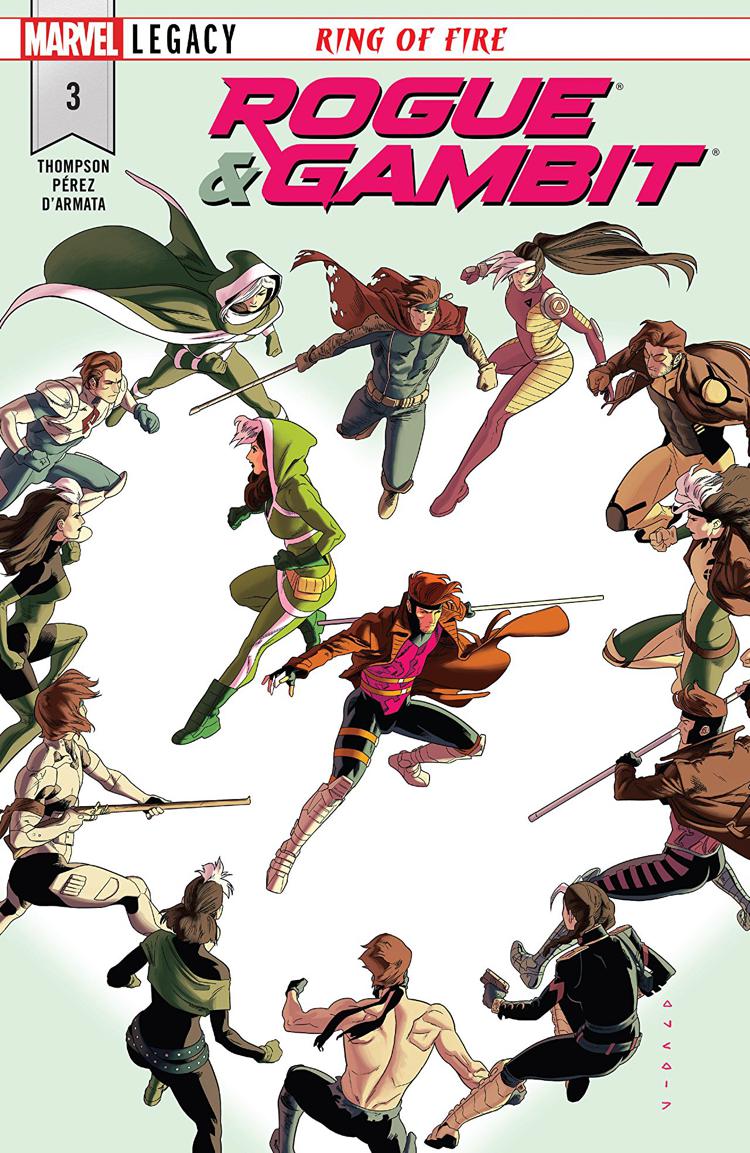 This issue of Rogue & Gambit opens in a similar fashion to the last issue with a somewhat unexplained gap in time. We are slightly uncertain how our heroes went from an experimental lab growing unknown beings at the end of issue two, back to the therapy couch at the beginning of issue three. It’s this mysterious jump that reinforces the plot points revealed in this mid-story entry to the mini-series.

For those who have not been reading, the series has our on again- off again lovers investigating a paradise couples therapy island where mutants have been going missing. Up until now, the series has focused heavily on nostalgia and the messy past of Rogue & Gambit with a sprinkle of danger and excitement from their investigations.

This issue continues that trend. What has kept the flashback heavy series fresh is the way Thompson has used it as a thesis for explaining the dysfunctional conditions which surrounded the two characters. As comics fans we are not ignorant that often characters are broken apart because of editorial direction or plot. This series takes those moments and emphasizes the character growth and motivations behind those decisions. It is character driven retcon that services Rogue, giving her character exploration she often doesn’t receive during those critical plot points throughout her existence.

Pérez and D’Amata’s art is full of life and color. Pérez has very expressive faces in simple four panels that creates a level of humor and emotional from the very first page. From there an art nouveau layout immediately hits you as the reader is transported into a tantalizing yet painful memory. D’Armata’s colors around the borders and the current rendering of the colors are dark and dramatic, emphasizing the pain, while the memory itself is bright and rose-colored. It is a subtle touch that helps your eyes immediately recognize what’s happening before you read the first words on the page.

I know I talk about layout a lot. However, it’s fascinating to see how emotional moments and fight sequences in this issue are the ones that receive dramatic gutters or overlapping panels. Meanwhile, times where the couple are in the therapy office or just investigating go back to clear cut panels and gutters. The spacing of the lettering is also phenomenal. It’s a dialogue rich issue that does not feel like the dialogue is overwhelming the art. With two characters going back and forth about their memories and feelings it could be easy to get lost on who is speaking or where to read next. However, Caramagna’s choices make it very clear. Small choices, such as having one speech bubble every so slightly lower than another keep confusion away. There are plenty of long speech tails in the issue, however it keeps any lettering from fighting the art and continues to provide clarity. I know some people who are not fans of these, however I will take clarity of who is speaking and not competing with art any day over having traditionally shorter or smaller.

With the emotional emphasis and investigative aspects of the story, it is not action heavy. Every issue has had some action element toward the end, as the mini-climax for each issue is reached. The action sequence in this issue has been the most fun with a humorous fight scene that I’m sure many a quarreling couple wish they could act out. It fills in multiple elements, besides humor and action, such as nostalgia and Easter eggs for long time fans. This series does not require you to be a long time fan of Rogue and Gambit to appreciate it. However, there could be an emotional disconnect or boredom for anyone who does not already have an investment in these characters. It is a well written story, with beautiful art. It still leans heavily on the history of these characters. For those who are automatically not interested then the book is not for you. Hopefully it will cause others, who are not familiar, to jump into the Marvel Unlimited back issues to learn more about history between Rogue and Gambit.