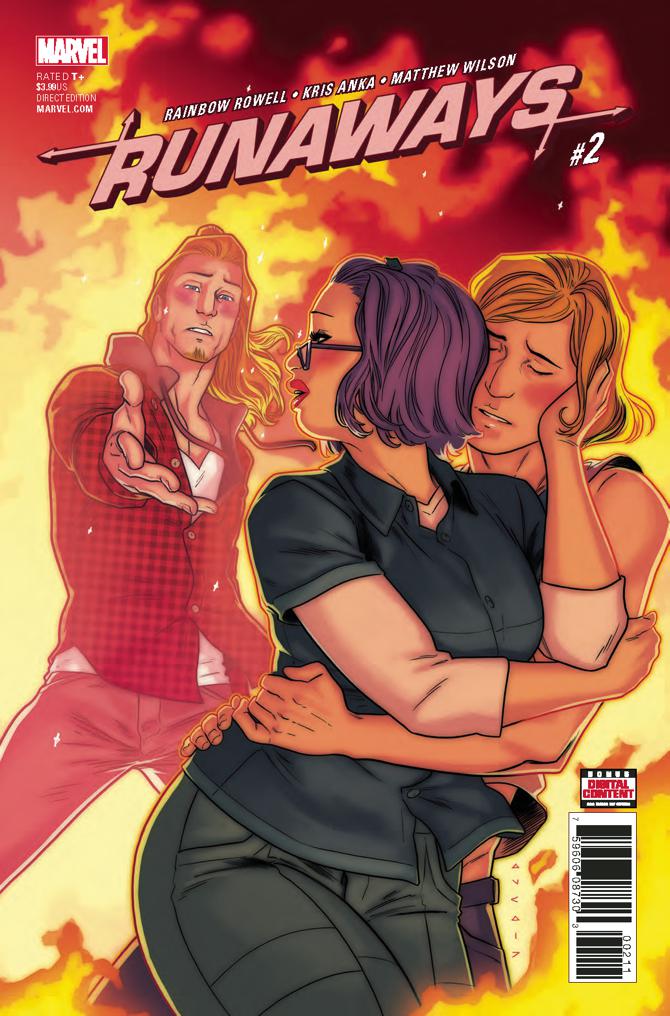 Gert Yorkes and Chase Stein are one of the great romances of comics. When news hit that the Runaways franchise was being rebooted with the original team members, fans of the original series had to know: what does this mean for Gert and Chase? Rainbow Rowell, Kris Anka, Matthew Wilson, and the rest of this creative team hit us with a tearjerker issue. Gert wrestles with what happened during the past two years when, before the events of the previous issue, she was dead.

Nico Minoru, one of my all-time favorite characters, gets hints of the complexity that made her such a compelling protagonist in years past. Gert questions why Nico didn’t exercise more leadership in keeping the team together over the past two years, and Nico reminds her that she often challenged Nico’s decisions. We find out that Molly is living with her grandmother, Victor is dead, Karolina left, and Klara is in foster care. I’m thrilled that Molly is returning to comics in a substantial role, and Rowell and the creators tease that there may be more of Victor still to come.

Kris Anka channels a breadth of emotions through Nico’s, Gert’s, and Chase’s facial expressions. From forlorn to furious, Anka conveys Gert’s feelings through every arms-crossed posture and gesture. The original series didn’t have many conversations between Nico and Gert, choosing instead to focus on interactions between Karolina and Nico. It feels new to see Nico and Gert reform a tentative friendship, and the energy of possibility hangs over the three main characters in this issue with an optimistic tone.

To longtime fans of the Runaways team and franchise, even the beloved characters who are absent still make their presence felt. There’s an emptiness in the stairwell’s cavernous foyer where Anka places Chase, Nico, and Gert, and the reader can almost feel that Molly and Karolina belong in the gaps. I love how Anka draws Nico with her legs tucked against her on the couch. There’s believability in every pose Anka gives these characters, and the art makes Rowell’s dialogue feel more natural.

I’m anxious for Karolina and Molly to rejoin their friends as soon as possible, and I’m holding out hope that we’ll see Klara, Victor (despite all odds), and even Xavin in future issues. For Runaways fans old and new, Rowell, Anka, and Wilson weave a story that hooks our emotions and won’t let go.